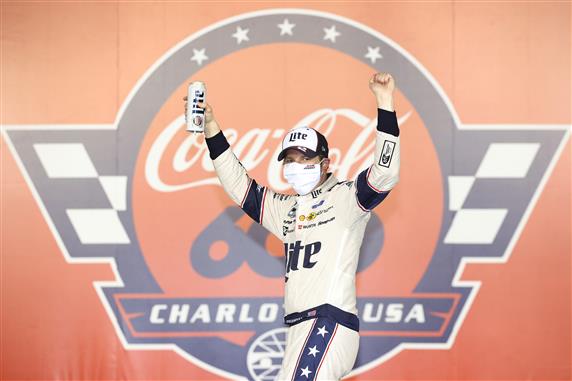 If you listen to the talk, most people are certain this year’s title will come down to either Kevin Harvick or Denny Hamlin. Frankly, it should come down to them, and it well might. Provided they both make the finale at Phoenix Raceway, they’re both strong there, and they’ve finished one-two more than once already this year.

But given the nature of the playoff structure, they’ll enter that race on completely equal footing with two other drivers. Who’s most likely to steal the title away from one of the Big Two? Here are some candidates.

Harvick and Hamlin have 11 wins between them, so it’s easy to forget that as of right now, Keselowski is second in points. And while he won’t catch Harvick, he’s running Hamlin virtually point for point. If the playoffs play out more or less like the regular season has, Keselowski should make it to the final race. He doesn’t have a Phoenix win yet, but he’d like to start with this one.

His major advantage: Playoff points. Keselowski has 21 playoff points, and remember, those carry through the first three rounds. Keselowski can afford at least a mediocre day or two, and for sure has an edge in the wild card at Talladega Superspeedway where, if he does get involved in the inevitable multi-car crash, he’s not automatically done.

His disadvantage: His Phoenix numbers aren’t anything to get super excited about. He’s not bad there, but hasn’t won in 22 starts. And while he’s in the top 10 in most stat categories, a lot of that comes from longevity and a lot of starts rather than running great.

Team Penske has another driver with championship experience in Logano, who made it to the final race in 2018 on a remarkably consistent second half of the season, and once he was in, he grabbed the title from three drivers who fans were sure would fight it out among themselves. Didn’t happen, and Logano is having a decent season. If he can reel off a string of top 10s in the first couple of rounds, he can make a case for himself.

His advantage: That ability to reel off a string of top 10s. He’s had some hiccups in 2020, but he has two wins (both pre-shutdown). And one of those two wins? Phoenix.

His disadvantage: He hasn’t shown that consistency this year. He’s sixth in points, and it’s only his previous championship experience (and teammate Ryan Blaney’s absolutely terrible luck) that puts him this high on the list.

Nope, he hasn’t won a race yet in 2020. Do you really think he won’t? Really? That’s what I thought. Busch is impossible to count out for a win, anywhere, any time. He will fight any driver tooth and nail for a win, and it’s hard to think he won’t get one, or a few, this season. Stranger things have happened, and Busch has a way to go before he’s championship caliber. But if he makes it to Phoenix, he’s a threat.

His advantage: He’s the defending champion for a reason, and he will do whatever it takes to win a race if he possibly can. Even if that means wrecking someone. Even if that someone is his brother or his teammate. Quite simply, Busch does not back down.

His disadvantage: Busch has probably suffered the most from not having practice this year. If his cars aren’t right off the truck, his team struggles to make them right for him, and he struggles to drive them if they aren’t exactly right. Again, it’s hard to imagine them not getting at least one right, but it was hard to imagine he’d be winless to date this year. Stranger things have happened.

Looking at Elliott right now, he looks to be a step behind championship form. He has a win at Charlotte Motor Speedway and a bunch of top 10s, but hasn’t been a weekly threat to win. But … he doesn’t have to win every week. He needs to run well enough to make the finale and then hope for a little luck and momentum. Elliott tends to be streaky, so if he hits a hot streak just right, he could steal one.

His advantage: He’s solid at Phoenix and finished in the top 10 there this spring. And streakiness isn’t a terrible thing, either, if the timing is right.

His disadvantage: He’s not running with Harvick, Hamlin and Keselowski on a regular basis. Yes, he’s fifth in points and has had plenty of good finishes, but he hasn’t had a ton of great ones, and while he’s solid at Phoenix, in the last four races, he’s been … not so good.  Before that top 10 this spring, Elliott had three straight finishes of 14th or worse at Phoenix, with one being a 39th place in the fall race last year. He has to get hot at the right time, and he hasn’t done it yet.

Yes, really. Here’s the thing with Almirola … he’s been rock steady this summer. His 16th-place finish in the first race at Michigan International Speedway last weekend was his worst since Martinsville Speedway in early June, his only finish outside of the top 10 in that span. He bounced back from that with yet another top 10 on Sunday at MIS. Top 10 after top 10 will get him fairly deep in the playoffs. Yes, he still probably needs a win or two, but he’s got the equipment to win and has run well enough that it’s not a stretch to think one could be coming.

His advantage: He is probably going to finish races, and he’s probably going to get a top 10, if not a top five. And while it’s often been so, a driver doesn’t have to win the final race to come away with the title. Phoenix is tighter quarters than Homestead, and it’s not crazy talk to say that a top five could make a champion. He’s on this list because he’s been so consistent. Remember, that took Logano all the way to the head table.

His disadvantage: He’s the highest ranked driver in points without a win. It’s possible a driver could get a title with no wins; the reigning Gander RV & Outdoors Truck Series champ Matt Crafton did just that in 2019. But Almirola needs to at least show that he can compete for wins, and he hasn’t been there consistently. He’s excellent at Talladega, and there are enough weeks left that that little gap could close. But right now he’s a step behind.