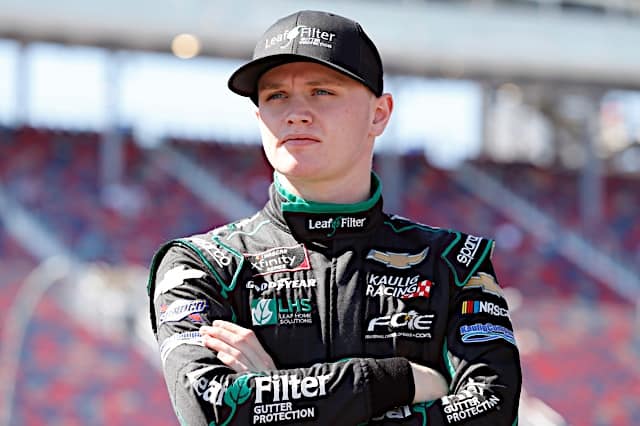 On paper, Justin Haley has the best numbers for Kaulig Racing since the team formed in 2016. Granted, he’s competed in more races for Kaulig than all but one driver (Blake Koch), but the Indiana native is hoping that consistency pays dividends over the final three months of the 2020 NASCAR Xfinity Series season.

In 2018, Haley made the Championship 4 with GMS Racing in the Gander RV & Outdoors Series, winning three races and opening the eyes of team owners at the next level. That fall, he signed a two-year deal with Kaulig Racing to replace Ryan Truex in the No. 11 car.

In his rookie Xfinity campaign last year, Haley was solid, earning a team record 20 top-10 finishes. In fact, he was just one top-10 shy of matching Truex and Koch’s total over three seasons.

But Haley says he’s always been a consistent driver, whether it was competing on dirt, winning the 2016 K&N Pro Series East (now ARCA East) championship with top 10s in all 14 races with an average finish of 3.4, steadily improving in Trucks or joining Kaulig last season.

“I feel like I’ve always been a consistent driver anywhere I’ve even ran,” Haley recently told Frontstretch. “We might not be the fastest every week but we’re right there in contention and competing. Just being there and grind out a finish, being able to stick your car in there where it may not be handling well one week and trying to fix the issue.”

This season, Haley has 12 top-10 efforts in 20 Xfinity starts, on pace to narrowly eclipse the record he set last year. Unfortunately for the 21-year-old, Ross Chastain, running his first full season with Kaulig already has 16 such finishes (including 11 in a row).

Compared to Haley’s rookie campaign, though, the No. 11 team has made many improvements. The 2020 season started off slow, but since winning at Talladega Superspeedway in late June, he’s only had one finish worse than 11th over the past eight races.

But Haley believes the season has had its fair share of ups and downs.

“I think overall the season has been good; we’ve been fighting and clawing at it,” he said. “We’ve come a long way from where we were last season, and we just continue to build.

“I think Chris [Rice, president of Kaulig Racing] labeled us as a B. I would say a B, for what we are, is good. We’re still a new team and still building. There’s definitely room for improvement, but it definitely could be a lot worse as well.”

The win at Talladega was a motivator for Haley. He became the 32nd driver to achieve victories in all three of NASCAR’s national touring divisions. But he felt the triumph was a long time coming, especially after getting into an incident with Riley Herbst and Colby Howard at Bristol Motor Speedway in late May, after just catching race leader Justin Allgaier.

Haley has that victory, with seven total playoff points, one of which came virtue of a stage victory last weekend at Road America. His average finish of 9.8 is tied for fifth-best in the series with Noah Gragson.

For the first time since starting an Xfinity team in 2016, Kaulig has two full-time entries. Haley admits in his rookie season there was “a little more pressure” to perform because he was the sole driver. Sure, both Allmendinger and Chastain won races in 2019, but the driver chasing the championship was the rookie.

Allmendinger, who has competed in 11 races as Haley’s teammate at Kaulig, has seen a great deal of maturity in the driver over the past year and a half, even having to get on him last year.

“He’s come a long way since last year,” Allmendinger said. “… He made the race team a lot better, but I felt like he definitely, at times, and I know this for a fact because I’ve let the pressure take over and put me in a bad attitude situation … he had that a lot last year. I got on his case that he needed to turn it around, he was too young to have an attitude like I had.

“Coming into this year, he’s really taken that and been a leader. He’s made this race team better. He knows how to go about the weekends, and more importantly, out of the racecar he’s leading the team a lot better and I think that’s showing in all the results he’s showing is because of his leadership.”

Meanwhile, the addition of Chastain full time has played great dividends, and Haley admits having his teammate’s veteran experience has pushed the second-year driver both on and off the racetrack.

However, Haley admits he hasn’t leaned on Chastain all that much, and at the beginning of the year it was Chastain leaning on the second-year Xfinity driver. Regardless, they’ve made for a powerful duo, sitting third and fifth in the championship standings, respectively.

“Most weeks, we struggle together or we thrive together, and that’s nice to see that we [are] both feeling the same things,” Haley said. “If I say one thing and maybe the team might not understand what I’m saying and Ross can say the same thing that I’m saying but in a different way and maybe that will click for the team. Having two or three guys that are saying the same thing but saying it differently has been huge because that may click for one of the crew chiefs.”

With the postseason lurking, Haley notes there are a few things his No. 11 team needs to improve on, especially if it wants to go deep into the playoffs.

Haley said, “We just need to work on our starts to mid-race. I feel like we’re always there at the end of the race, but from the start to the middle of the race, I take some time to get used to the track where maybe Ross will fire off with his experience and be confident in the car.

“We just need to keep working on getting better in the early stages of the race and getting some more championship points. At Phoenix, if it comes down to it, the start of the race doesn’t mean anything. But to get to Phoenix, you’re going to need to have some playoff points, for sure.”

No matter how the season turns out, Rice is proud of the work Haley has put into being a better racecar driver and into betting Kaulig Racing.

“I’ve been very pleased with Justin’s progression this year,” Rice said in a statement to Frontstretch. “He’s won us a race and two stages so far. He has grown as a person and as a racecar driver, and he’s a great teammate to our other two drivers. We’re looking for more wins and more stage wins with Justin and going for the championship in Phoenix.”

Haley believes the No. 11 team is right on the cusp of making a push towards the championship. Last season, he failed to make it out of the first round, but this year, the first round suits his style. The series will race at Talladega, which is makeup date from a race earlier in the season, while also visiting the Charlotte Motor Speedway ROVAL. All of his playoff points this season have come on road courses and superspeedways.

Should Haley make it through the opening round, then there’s a three-race stretch that includes Kansas Speedway (where he finished sixth in July race), Texas Motor Speedway (finished eighth in first race this season) and Martinsville Speedway, which is a total crapshoot. But the driver believes Kaulig racing is championship caliber.

“I think if everything goes right and we hit on some of the right stuff, we can definitely be there in contention,” Haley said of competing for the title. “I think the final four is a no-doubter. We’re going to be extremely disappointed if one of the cars or both don’t get to the final four. I think [Kaulig is] championship caliber, but I think we have a long ways to go to run with some of the Cup organizations.”