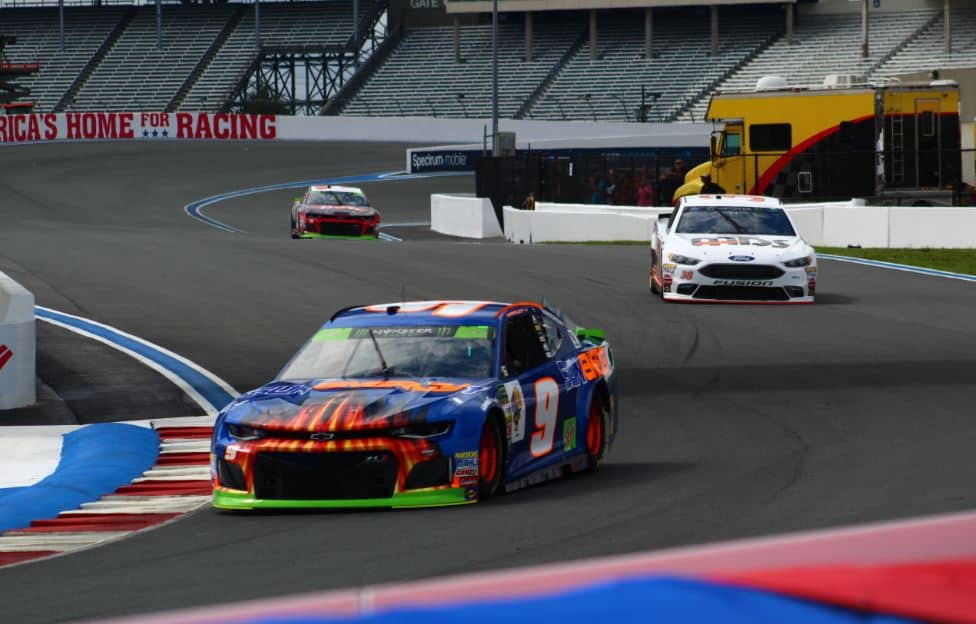 With no track time before this weekend’s NASCAR Cup Series race on the Daytona International Speedway road course, who stands out as having some kind of advantage?

Amy Henderson: While a handful of drivers have some experience on the road course at Daytona, it’s all in much lighter, smaller sports cars. They aren’t going to handle like a Cup car in the least, so the most those guys have up their sleeve is sight lines. That means you really have to look at the drivers who excel at road courses in general. And while Martin Truex Jr., Chase Elliott and Kevin Harvick come to mind there, the one driver who’s both a consistent road course threat and has recent experience at the Daytona road circuit?  Kyle Busch. He’s starving for a win, and he might be the favorite to get it Sunday.

Zach Gillispie: Elliott is one of NASCAR’s most underrated road course drivers. We saw him rebound from a crash at the Charlotte Motor Speedway ROVAL to win that race last year. However, the one thing working against Elliott is track experience, but he is not alone. Very few competitors on the entry list have Daytona track time. Among them is Jimmie Johnson. Remember when he nearly one the inaugural ROVAL race?

Christian Koelle: Your road course ringers will rise; look to Michael McDowell, James Davison and Brendan Gaughan as examples who will stand out. But with a majority of this course being on the oval, I don’t really see much of a change. Elliott, Johnson and Ryan Blaney, just to name a few, have risen above at the ROVALs since the first one was introduced in 2018. Busch is one of those drivers who really stands out, as he’s had track time this season on this track.

The last two teams that entered into a technical alliance with Joe Gibbs Racing have gone under. Mere coincidence, or is there a likely connection between both occurrences?

Gillispie: These two closures have how tough it is to run a Cup team, especially as a small organization with limited personnel. Alliances are great, but there are also risks involved. While it’s not a complete coincidence, teams get involved in alliance with the prospect of becoming a competitive organization. We saw it happen with Furniture Row Racing when it won the 2017 championship. While Leavine Family Racing wasn’t quite there yet, it looked to be on the same path as FRR. Unfortunately for these two, the parallels don’t stop there. The more competitive you want to become, the more funding you need. Both teams’ performance on the racetrack stepped up, but sponsorship didn’t. There is your problem.

Koelle: LFR has always had sponsorship troubles, running those special paint schemes a few years ago with McDowell in an effort to draw new sponsors in. With FRR, there was a vibe that JGR always wanted Truex, not the organization. Otherwise, that No. 77 entry that was abandoned after Erik Jones moved to JGR would’ve been filled. FRR also noted late in its tenure that the fees handed down by JGR to use its stuff were insane. These two are two completely different scenarios, but something is going to need to change or Toyota will be racing against its own development program.

Henderson: Definite connection: their bank accounts. FRR had a much greater level of support from JGR than LFR ever could have hoped for, but it paid for it dearly. It didn’t come cheap, and without sponsorship to pay for those championship-caliber chassis and engines, the alliance was no longer feasible. FRR could not have remained competitive without that alliance and chose to fold rather than to go without the support. LFR couldn’t afford the support to make it competitive enough to attract more money, even with Bell’s talent or Matt DiBenedetto‘s popularity. Even though JGR was ultimately grooming Bell for themselves, they weren’t giving away the equipment, and LFR was faced with going backward or folding.

What do the recent moves at JGR and the sale of LFR mean for Harrison Burton’s potential Cup future?

Koelle: Busch, Denny Hamlin or Truex are on the hot seat now, unless Toyota goes and finds a new team to support. Spire Motorsports now owns two former Toyota Racing Development charters in FRR and now LFR. Blake Jones spoke with me late last year about Spire and its desire to use the upcoming new Cup car as a springboard into the future. If Toyota and Spire teamed up and went into the new car with that relationship, it might be something worth speaking about. Otherwise, Harrison Burton‘s debut is at least two years away, and that’s putting it nicely. Again, there’s no room, and it will eventually hurt TRD when its talent goes on to race against it.

Henderson: You have to wonder who else is looking at Burton. There are seats available. Hendrick Motorsports picked up William Byron when Toyota didn’t have room for him.  Could it go that route again? The No. 42 is a long shot in that if Bubba Wallace doesn’t go there, Ross Chastain is likely to, but if Wallace does, the No. 43 could be an option. Burton has a family connection to both RFR and RCR, and if he’s willing to stay in Xfinity for another year, something could happen there in 2022 when the new car debuts and teams consider expanding.  And realistically, Burton’s best shot is to stay in Xfinity another year anyway–he’s very young and another year of experience would only help him succeed in the long run.

Gillispie: This is just another example of Toyota’s talent problem in NASCAR. Think about this: why does the manufacturer with the least Cup entrants have arguably the largest and most prominent driver development program in the lower ranks? That’s why we’ve seen Wallace, Ryan Preece, DiBenedetto, Noah Gragson and Hailie Deegan leave the Toyota driver development program in the the past. For them, it has seemingly worked out so far. With Toyota’s space problem, Burton’s best way to Cup as it stands now would be to jump the Toyota ship.

Gillispie: Let’s go back to the early years of the Truck Series where every venue was either a short track or a road course. Those venues where part of what made the trucks what they are today, so more shorts tracks and road courses, please!

Henderson: Absolutely. The trucks put on a great show no matter where they race, and road courses are usually pretty darn fun to watch as well.  The trucks did turn right in their formative years and put on some good races.  The Truck schedule is a couple races short of ideal right now anyway, so adding some right turns wouldn’t be a difficult matter at all.