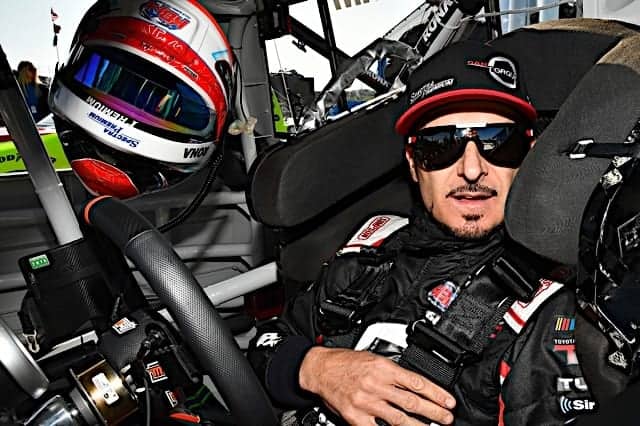 The NASCAR schedule isn’t just visiting a new track this weekend when its top series tackle the Daytona International Speedway road course. Some new faces are coming along, too.

As is often the case with NASCAR’s road course races, multiple drivers entered this weekend are not full-time competitors on any NASCAR circuit. Instead, they either fit the standard definition for a road-course ringer, the type of racer who thrives on tracks on which one turns right as well as left, or are at least more familiar with the course at hand and decide to move into the big leagues in a familiar space.

Quite a few haven’t even raced in one of NASCAR’s national series — the Cup, Xfinity and Gander RV & Outdoor Truck series — or the slightly more regional ARCA Menards Series, let alone competed in 2020.

In the spirit of keeping the reader informed, especially for those who might follow just one of the four series racing this weekend or perhaps don’t go outside stock car racing as a whole, here’s a handy list of those making their 2020 — or series — debuts in any of the four series this weekend at Daytona. We’ll start with the Xfinity Series, as no driver in the Daytona Cup race hasn’t yet competed in 2020.

Earl Bamber: Of the drivers listed here, Bamber might have the top shot of winning his respective race, depending on who you ask. It helps that he’ll be in prime equipment as the driver of Richard Childress Racing’s No. 21, despite it being his maiden Xfinity start. The New Zealander competes on the WeatherTech SportsCar Championship circuit and has won the 24 Hours of Le Mans twice. Tough to argue with those credentials.

Harold Crooms: After testing with MBM Motorsports earlier this year in an ARCA car at Daytona, Crooms is tackling the road course configuration for his first Xfinity start, driving the team’s No. 66. The Florida native occasionally competes on the CARS Super Late Model Tour and at other short tracks across the state.

Mike Skeen: You might remember Skeen as the guy whose girlfriend slapped Max Papis after the 2013 Truck Series event at Canadian Tire Motorsport Park following the pair’s wreck in the final turn of the last lap. He’s also got an Xfinity start to his name at Watkins Glen International, driving for JD Motorsports with Gary Keller in 2018. A competitor now in the Trans-Am Series and a past competitor in WeatherTech, Skeen’s driving Nemco Motorsports’ part-time No. 8.

Kris Wright: GMS Racing’s No. 24 features a driver debut for the second week in a row, as Wright follows David Gravel, who made his Truck debut last week at Michigan International Speedway for the team. Wright’s pedigree includes his ARCA debut at Michigan last weekend, plus a pair of ARCA West starts earlier this year, finishing in the top five in both. He also finished second at the Rolex 24 at Daytona in 2019 in his class and seventh overall, certainly a boon to his chances in a truck at the same track.

Scott Lagasse Jr.: Though Daytona marks his first start of 2020, Lagasse should be a familiar name for fans who follow the Xfinity and Truck series; he has 100 starts in those two series since 2005. This weekend marks his reunion with On Point Motorsports; Lagasse was the driver in the team’s maiden series start at Bristol Motor Speedway two years ago.

Bryan Collyer: Reaume Brothers Racing’s Truck Series team fields two debuting drivers this weekend, with Collyer piloting its No. 33. The 57-year-old Floridian competed at the Daytona road course in the Grand-Am Rolex Sports Car Series in the mid-2000s for Michael Baughman Racing and has continued to compete at tracks around the country. Remember that another ringer, Mike Marlar, took the No. 33 to a fourth-place run at Eldora Speedway last year.

Carson Hocevar: After announcing he’d be running for Niece Motorsports part time in the Truck Series in 2020, Hocevar finally gets to actually run a race, driving the organization’s No. 40. The teenager first popped up in the series last year, running at Eldora and Phoenix Raceway. In 15 ARCA starts, he has six top fives and 12 top 10s.

Mark Smith: Like Hocevar, Smith makes his season debut for Niece at Daytona, driving the part-time No. 42. The announcement of his entry came as a bit of a surprise for some, as Smith’s lone NASCAR start had come on the dirt at Eldora last year, and he’s more known for his dirt racing prowess than his road racing.

Roger Reuse: The Reuse brothers return at Daytona, with Roger driving CMI Motorsports’ No. 49. Generally speaking, he’s been known for his appearances on road course on the NASCAR level, with all of his Xfinity and Truck starts coming on road courses (though you can also find him at short tracks across the country). His best NASCAR finish came last year at Mosport in a truck, finishing 25th.

Alex Tagliani: This could perhaps be Tagliani’s best chance at a NASCAR national series win yet. The Pinty’s Series regular in Canada has five previous Truck starts, his latest a runner-up finish with Kyle Busch Motorsports’ No. 51 at Mosport last year. And now he’s returning to the same team, and at a track configuration at which he has experience in sports cars.

Bobby Reuse: Like his brother Roger, Bobby is making his season debut at Daytona, driving the No. 68 for Clay Greenfield Motorsports. Though he has some NASCAR oval (and countrywide short track) experience, he’s usually a road course racer, and his best finish was at Mosport in 2017, with a 17th-place result.

Bobby Kennedy: Reaume’s other entry, the No. 00, features Kennedy, a Trans-Am Series driver who’s making his Truck Series debut at Daytona. A Floridian, he, like teammate Collyer, has experience on the Daytona road course, which should come in handy against the series regulars who’ll in many cases be seeing the track for the first time.

Tim Monroe: The driver of Fast Track Racing’s No. 11 is a modified driver and competitor at Indiana’s Shadyhill Speedway who’s making his ARCA debut Friday. He’s also a crew member for FTR, owned by Andy Hillenburg.

Nick Igdalsky: Pocono Raceway’s CEO is also a former ARCA competitor — well, former until this Friday, that is. Igdalsky, who’s driving FTR’s No. 12, last competed in the series in 2015 and has 31 starts, with a best finish of sixth at Pocono in 2014.

Will Rodgers: Daytona marks the return of Rodgers, who’s driven two ARCA West races in 2020, to the main ARCA circuit after six starts in 2018 that resulted in four top 10s. Last year, Rodgers also ran four Xfinity races for Brandonbilt Motorsports, with a best finish of 12th at Mid-Ohio Sports Car Course. Rodgers has won in NASCAR competition before on a road course, emerging victorious on the ARCA West level at Sonoma Raceway in 2018. He’s driving the No. 17W for Steve McGowan.

Parker Chase: Keep an eye out for Chad Bryant Racing’s No. 22, which returns to the track Friday with Chase, a 19-year-old from Texas who was one of Kyle Busch‘s teammates at the Rolex 24 earlier this year, making his ARCA debut.

Bryan Dauzat: Dauzat dusts off his self-owned No. 57 machine for his ARCA return at Daytona; he’s mostly been kept busy in 2020 driving the part-time No. 28 for FDNY Racing in the Truck Series, with a best finish of 26th at Pocono. He last drove in ARCA in 2019, finishing 12th and 13th at Talladega Superspeedway and Charlotte Motor Speedway, respectively.

Will Kimmel: A Kimmel is finally back in ARCA, as Will makes his first start of the season in his family-owned No. 69. A veteran of the series, Kimmel made just two starts in 2019, both on dirt tracks. As such, Daytona marks his first ARCA start on pavement since the season finale at Kansas Speedway in 2018.

Ayrton Ori: Orlando, Fla.’s Ori is making his ARCA debut in the No. 74 for the part-time Visconti Motorsports. Ori will be the youngest competitor this weekend in any of the four series, having turned 16 in late June.