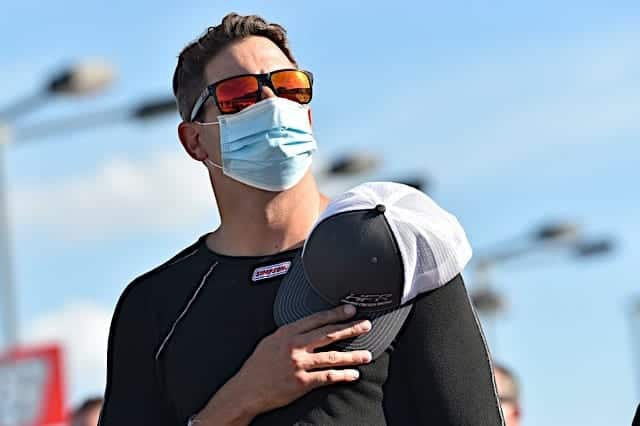 Five drivers – Grant Enfinger, Sheldon Creed, Austin Hill, Matt Crafton and Zane Smith – have already locked themselves into the championship battle with victories this season, but that also means there are still five more spots up for grabs after NASCAR expanded the playoff field from eight to 10 before the year began.

But for Stewart Friesen and Johnny Sauter, two of the drivers that were easily a part of almost anyone’s playoff driver predictions for this year, points don’t really matter all that much anymore. Sure, they could technically point their way into the playoffs, but it’s highly unlikely since Sauter is 72 points below the cut line and Friesen is 103.

For Sauter, the season started off well enough with a seventh-place run in the season opener at Daytona International Speedway followed by a runner-up finish at Las Vegas Motor Speedway. But in the nine races since the series returned from the COVID-19 break, the driver of the No. 13 Ford has just four top 10s and an average finish of 17.8. Add in those first two races, and the average result moves up to 15.4, which is still on track to be his worst since joining the series full-time in 2009.

The saving grace for Sauter is that, while he’s faced multiple penalties this season and a few strokes of back luck by being caught in other drivers’ accidents, the No. 13 team has shown some speed. Albeit not the same kind of speed that his teammates Ben Rhodes and Enfinger have shown – but it’s not all that bad when you really pay attention.

But with all of that said, a 72-point deficit isn’t something that’s going to be easily erased without a trip to victory lane. In fact, that’s likely why Sauter pushed the issue so much last weekend at Michigan International Speedway when he was trying to pass Enfinger for the lead.

Had he been a bit more patient and maybe waited for a lap or two before trying to make that move stick, it actually might have worked. Instead, he ended up with a wrecked truck that limped to a 16th-place finish.

For Friesen, the situation is a bit more dismal as he sits 102 points behind the cut line for the playoffs. Again, it’s still mathematically possible for him to point his way into the championship battle, but it’s far from realistic. And a 19.2 average finish doesn’t exactly invoke confidence that Friesen will be able to make up that points deficit. He’s currently on track for his worst average finish yet in his career, and that includes the 2017 season when he spent the first seven races without an alliance to a bigger team.

Friesen’s issues stem from more than on-track bad luck. It’s a simple case of changing manufacturers and alliances during the offseason. During the 2017 season, Halmar-Friesen Racing took a few races off to join an alliance with GMS Racing and came back swinging. Fast forward to this season, and the new alliance is with Kyle Busch Motorsports, along with a manufacturer change to Toyota. And while KBM is a strong team to be aligned with, completely changing a team’s inventory, especially in a single-truck situation, isn’t exactly easy.

So while both drivers find themselves in a must-win situation for very different reasons, it’s very clear that both need to find their way to victory lane. For Sauter, the speed is there if he and the team would stop shooting themselves in the foot with penalties and crashes. But for Friesen, the biggest problem seems to be overall speed and long-term race performance.

Both drivers do have one thing in common this weekend, though: The unknowns of the Daytona road course. No one is getting practice or qualifying, so it will be a relatively even playing field that will likely end up playing toward the veterans who better understand the aerodynamics and characteristics of the trucks.

The process works??. Excited to be going back racing with the boys @TeamSDM11 @DISupdates. Gotta thank the medical team at @NASCAR for the guidance along the way in taking the proper steps during my quarantine https://t.co/epZ6ajcFMt

Oh, it's about to go down. ?#TheTrip starts August 16th on the @DISupdates Road Course. pic.twitter.com/buQw7tk0ZW