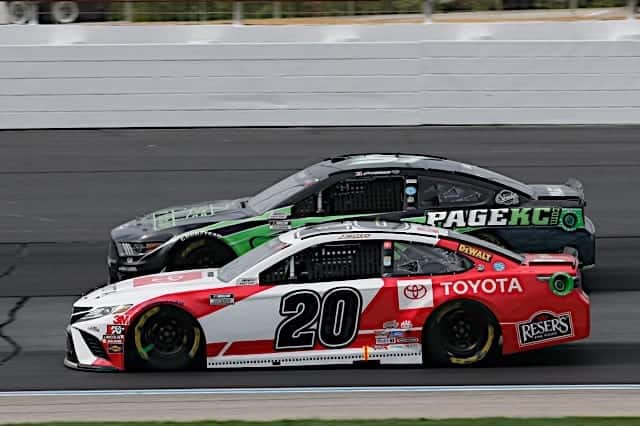 The NASCAR Cup Series takes on Daytona International Speedway road course for the first time ever this weekend, a sentence that I never thought I would hear in 2020.

With changes to the 2020 schedule, NASCAR added the Daytona road course for the 23rd event of the 2020 season, replacing the scheduled road-course event at Watkins Glen International.

With no practice at the track, a lot of drivers will be taking their first laps at the Daytona road course when the green flag comes out. The event will be a true wild card, as the playoffs will start after four more races.

The playoff field is looking to be more and more set this week. The gap from the last spot in the playoffs to the first spot out grew from 15 to 26 points. Bubble drivers like Erik Jones, Tyler Reddick and Jimmie Johnson are likely going to need a win to secure a spot.

Johnson has the most experience on the Daytona road course, with eight Rolex Grand-Am starts there. Other drivers with experience running a race at the road course include Kyle Busch, Kurt Busch, Brendan Gaughan, Ryan Newman, Martin Truex Jr. and Matt Kenseth.

How should you pick your fantasy drivers when this course was a fantasy on the schedule four months ago? First, the distance of the race is important; it’s a short race. While drivers at other tracks could make up lost ground early in the race at other racetracks, the race distance is less than half of the Daytona 500.

More importantly, how is Daytona laid out? The road course is a circuit with high-speed straightaways plus some sharp and high-speed turns. Look for drivers who had success at Watkins Glen and the Charlotte Motor Speedway ROVAL to be contenders.

Also, with only 0.1 points awarded for each lap led by a driver, the need for a dominator is less important when building a winning lineup. The 65-lap race will have a total of 6.5 points up for grabs in this category. Take note when building your roster and focus on mid-pack competitors who can climb up toward the front on race day.

Career Highlight: Two wins at Watkins Glen and one win at the Charlotte ROVAL

Engine No. 9 is looking to crack the top five for the first time since a fourth-place finish at the second Pocono Raceway race. Even though Chase Elliott has one points-paying win this season, he has led more races than Denny Hamlin. Elliott scored his first win in NASCAR’s top three series at a road course at the age of 17, and three of his seven wins in the Cup Series have come on road courses. At Daytona, Elliott won back-to-back pre-500 Duels in 2017 and 2018. Even this season, Elliott has proved he can win in short events with his win at the All-Star Race. Elliott will roll off from seventh and will try to bring the Elliott name back to victory lane at Daytona in a points-paying race for the first time since 1991.

Career Highlight: One win at the ROVAL and an 11th-place average finish at Watkins Glen

Ryan Blaney has been a force at road courses and superspeedways. The shortest track that Blaney has won a Cup race at is 2.2 miles. The Daytona road course is the best of both worlds for the No. 12 team. In the last eight races, though, Blaney has been hit or miss. While he has scored three top 10s in that span, he has also finished outside the top 20 in the other five. Blaney will look to improve with some playoff points, as he is the highest driver in points with one win. He will have the advantage of starting deeper in the field to gain spots as he rolls off in 24th.

Career Highlight: Six top 10s in 10 Watkins Glen starts and a top five at the ROVAL

Brad Keselowski is having one of the best seasons of his Cup career at age 36. Even with a last-place finish at Michigan International Speedway, Keselowski sits with an average finishing position of 9.6, which is better than his 2012 championship campaign. While Keselowski is no road-course ace, he has led 114 laps at Watkins Glen in the No. 2. Keselowski is no stranger to victory lane at Daytona, as he visited there in 2016 in the July race. While celebrating his 400th start at Daytona, Keselowski starts 17th.

Erik Jones‘s 2020 season could be best described as quietly good while loudly bad. Over half of the races this season, Jones was outside the top 15, yet he has five top fives. He has never been the highest finisher Joe Gibbs Racing car this season; the last time that happened was his win at Darlington Raceway in 2019. Even though Jones’s performance may be the weakest at JGR, he has been quietly good at some tracks, including Watkins Glen. In three starts, he has finished top 10 in all of them. Jones will look for Daytona to be a great audition for a new team in 2021. He starts 20th.

Daniel Suarez can be a value pick for someone who is trying to fill out their lineup. While he is having his worst season according to average finish, Suarez has a best result of 18th this season at Bristol Motor Speedway and Kansas Speedway. Suarez can be sneaky good sometimes at road courses, as he scored two top 10s in three Watkins Glen starts. Even though Gaunt Brothers Racing is not a premier team of NASCAR, its best finish came at Daytona, with a 13th with DJ Kennington. If Suarez avoids trouble (he has finished every race this season), he could improve on his best finish this season. He will start 31st.