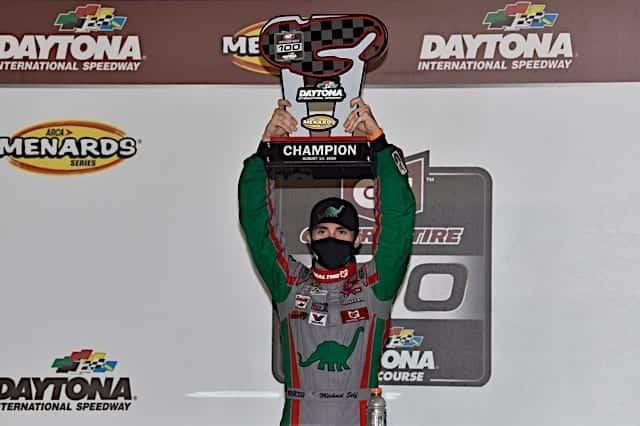 It was Michael Self vs. Ty Gibbs Friday night in Daytona International Speedway’s road course in the ARCA Menards Series.

But in the end, Self took the lead commandingly with six laps to go and never looked back, earning the victory.

Gibbs made contact with the grass in the backstretch bus stop trying to make up all of the ground he could, but the impact with the grass would impact the end of the race, as Self was able to take a an ultimate victory over Gibbs by five-plus seconds.

“That was so much fun racing him,” Self said post-race. “I hope he had as much fun as I did there during that first stage because that’s what rain racing on the road course is supposed to be about right there. He’s a good kid. He’s obviously a great racer, I’ve had the opportunity to teach him a little bit.

“Man, what a great day, we struggled in practice, the plug wires fell off and we didn’t get to make a practice lap today but these guys gave me an awesome Sinclair Oil Toyota Camry. This is such a big deal to me to come and win on a road course, I’ve been telling people I’m a good road racer and I’ve been backing it up by teaching these guys. This is so cool to be able to come and win on a road course. We need more road courses, man!”

Gibbs managed to hold on to second, followed by Colin Braun (who substituted as a relief driver for Sam Mayer under the mid-race break). Taylor Gray and Will Rodgers rounded out the top five.

The race was slated to begin at 5 p.m. ET, but lightning kept pushing off the stop time until the lights came on. At 8 p.m., the race finally went green, with Chandler Smith and Self starting on the front row.

Self was able to rocket out front, with Gray a bit behind. The cream began rising as the Nos. 25 and 18 began their battle, what would become an all-night contest, with the No. 18 ultimately taking the lead before the first lap.

The No. 12 of Pocono Raceway CEO Nick Igdalsky spun a couple of times before the halfway point of the race, and Sioux Chief Showdown points leader Smith also spun during this first stage of the race.

During the break, Mayer, who was running inside the top three, gave way for a driver change. Mayer was driving injured, having fractured his wrist last weekend at Road America during a crash in the TA2 race. Road-racing ace and NASCAR Gander RV & Outdoors Truck Series winner Colin Braun jumped on board.

Self and Gibbs restarted the race in first and second, and shortly after the first big accident of the night took place. Smith’s already rough night got worse as he spun with Max McLaughlin.

All of the cars involved were able to continue running, with McLaughlin having the most damage. Hailie Deegan also received minor damage to her car.

During the last restart, Braun made his move into second but didn’t keep it very long, as Gibbs took the position back and began running down leader Self.

With 10 laps to go in the race, Gibbs took the lead back. The No. 18 began running laps with the No. 25 in tow. He was able to run away with a 1.5-second lead, but that lead wouldn’t last. Self caught the No. 18 and was able to out-maneuver him, taking the lead.

In the closing laps, Gibbs made contact with the grass on the backstretch bus stop, adding damage to his right front.

With the No. 18 damaged, Self was able to take off and never look back, earning his ninth career ARCA victory and first on a road course in the series. Gibbs earned his sixth runner-up finish and fifth finish of second or better in 2020. Mayer was awarded his seventh top-five finish of 2020, with Braun finishing third. The No. 17 duo of Gray (17) and Rodgers (17W) rounded out the top five.

“I learned a lot from him,” Gibbs said of the race winner. “Very fun to race against him right there with him having all of this experience. Couldn’t get in the corner as hard as he could, and as you can see I wheel hopped and went off the track a couple of times, so it was a hard day but a fun time just thank my Monster Energy team and everybody that helps me out.

“That was on me, and I lost that one, that was all driver, that was all me. Just frustrating. I want to win so bad, it’s hard to lose. To everyone who thinks I’m butthurt and I’m a brat, I’m just hard on myself and want to make myself the best I can possibly be.”

Deegan finished the race in sixth while, McLaughlin, Bret Holmes, Smith and Parker Chase rounded out the top 10.

With his victory, Self continues to lead the ARCA Menards Series point standings by 15 points over Holmes, while Drew Dollar and Deegan are now tied for third. Self also takes the lead in the Sioux Chief Showdown points standings after Smith’s disappointing night by two points, Mayer sits in third, down three points, and Gibbs in fourth seven points behind. Holmes holds down the fifth position, trailing by 14 points.

The ARCA Menards Series next heads to World Wide Technology Raceway at Gateway in Madison, Ill., on Aug. 29. It’ll mark race No. 13 of the ARCA Menards Series and will be the seventh event in the Sioux Chief Showdown. The race will be broadcast live on MAVTV and on NBC Sports Gold: Track Pass starting at 6 p.m. ET.

Will this race be shown again on MAV TV ?