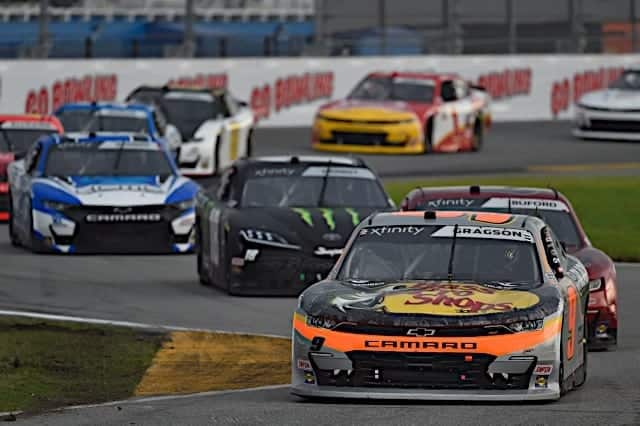 With the new algorithm to set the starting lineups, Gragson started the 2020 UNOH 188 in third place. He finished the first stage in second place and then led lap 17. As the leader, however, he spun his No. 9 JR Motorsports Chevrolet on lap 19, drawing the third caution of the race on Saturday (Aug. 15).

“We ran up towards the front in the first stage,” Gragson said in a post-race Zoom conference. “We finished second in the first stage. Started the second stage out in the lead. Then I stepped on my ding dong there in the kink and wrecked it pretty hard. Felt like I let my JR Motorsports guys down. Dave Elenz and the rest of the guys stepped up behind me, never kept fighting.”

.@NoahGragson crashes from the lead!

“I don’t know if I’m allowed to say it or you guys will write it,” Gragson wryly remarked regarding his thoughts about his wreck. “I wasn’t too thrilled with myself. Bummed but more importantly, I felt like I let my team down. I don’t like making mistakes and I’m hard on myself. Made a real big one but I was fortunate enough to hit the way we did. You don’t want to spin but we were able to recover and get the car back to 80-90%. Just tried to take care of it from thereon. Ended with a top three and tried to stay out of everybody’s way.”

As chaos ensued on the lap 47 caution, Gragson evaded any further damage to his car and shared his thoughts on both the race as a whole and its conclusion.

“It was a lot of fun,” he stated. “Just tried not to make enemies out there. Seems like some guys are mad at each other. But I had a good time. It was tough on brakes, tough on tires, the track got greasy there in the end. Everyone’s brakes were worn out. Everybody’s going as hard as they can, probably 105%. Just trying to save my car there at the end, obviously didn’t at the beginning of the second stage. We recovered for third so thankful for the opportunity.”

NASCAR earlier this year announced there would not be any practice nor qualifying sessions for any of its top series – the NASCAR Cup Series, Xfinity Series and NASCAR Gander RV & Outdoors Truck Series. None of those three series have competed on the Daytona road course before. Should NASCAR, therefore, have held a practice session for this race weekend?

“I think it was a great decision not to do practice,” Gragson answered. “We’re all racecar drivers. It’s who can go the fastest, who can figure it out the fastest. You go as slow as you need to go to figure it out. I don’t know if there needs to be practice. It separates the good guys and the bad guys in terms of who can figure it out. Road-course equipment evens it up to an extent. It brings the rear of the field closer to the front.”

“There’s a lot of great drivers,” he continued. Andy Lally in the No. 02 did a great job. It’s a lot of fun racing against these competitors. It’s been a dream of mine to run in the Xfinity Series and run road courses. I always like road courses. I was doing road courses in legend cars when I was 14-16 years old. Then to race on the Daytona road course is quite an opportunity.”

In seven career Xfinity Series starts on road courses, including the UNOH 188, Gragson has five top-five finishes and seven top 10s. The 22-year-old may not have a victory at a road course, but he is quickly mastering those tracks.

“I just try to focus on myself, our team, and focus on how we can be better,” Gragson said. “We can’t make mistakes. I made a mistake today that was pretty risky and costly. I shouldn’t even have been going that hard. Race the racetrack is what I try to do, not worry about my competitors. Save my car for the end. I didn’t do it today. A lot of guys get antsy whereas I try to keep everything together until the checkered flag.”

The next road course for the Xfinity Series will be the Charlotte Motor Speedway ROVAL, which will be the final race in the Round of 12. Gragson made his debut there last year, where he started 12th and finished fifth. With two victories already this season, Gragson and his team are beginning to prepare for the playoffs.

“Right now we’re trying to focus on ourselves,” Gragson said. “We had some good speed too. I have a lot of faith in my crew chief Dave Elenz and our No. 9 JR Motorsports team.”

Seven races are remaining in the Xfinity Series regular season. Next up for the series is a doubleheader at Dover International Speedway. Gragson’s third-place finish in the UNOH 188 gives him some momentum heading to the 1-mile track.

Indeed, in his three starts there, he has started inside the top 10 in all three races. He has two seventh-place finishes, including the most recent Xfinity Series race there. Heading to Dover, Del., Gragson now is third in both the championship standings and has the third most playoff points.