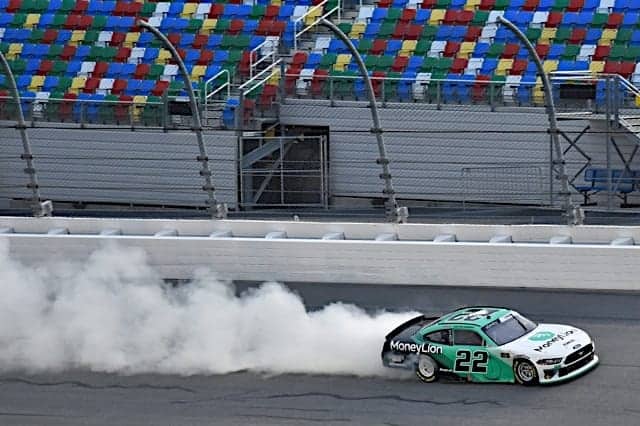 After weather delayed the first inaugural Daytona road-course race for the NASCAR Xfinity Series, Austin Cindric secured his fifth win in the last six races for Team Penske in the UNOH 188.

Cindric won the first stage and almost nabbed the second stage after battling Chase Briscoe hard for position in the final stretch.

Cindric laid rubber down before climbing out of his car to claim the checkered flag. He credited his entire team and sponsors for his win. “I didn’t feel like I was going my best today, but we executed there toward the end where it counts,” said Cindric, who nearly won the second stage after battling with Chase Briscoe. “[We’ve] still got a lot of work to do, but this is great for points I’m sure.”

Briscoe exited the race late after a pile-up in turn 1 forced him to head home. As the race came to a close, Justin Allgaier was turned in turn 6 by AJ Allmendinger. Allgaier claimed Allmendinger “made a dumb decision.”

“We came together in turn 6 toward the end of the race,” said Allgaier after confronting Allmendinger on pit road following the conclusion of the race. “We weren’t the best today, the guys did a really good job. … I’m over it. It’s not the first time he’s wrecked me.”

With a scheduled start time of approximately 3 p.m., the UNOH 188 was delayed nearly two hours due to lightning. Rain tires were on standby, and some drivers even started the rain on such tires. With no practice, numerous drivers experienced mistakes such as overdriving turn 1.

There were five on-track cautions, including when two-time 24 Hours of Le Mans Champion Earl Bamber, a 30-year-old competitor for Porsche Motorsports in the IMSA GTLM class, dove into a backstretch chicane rut which launched him into the inside wall on lap 43. Bamber was among other IMSA drivers, including Andy Lally, a five-time Rolex 24 at Daytona class winner, who is no stranger to competition in NASCAR.

The NASCAR Gander RV & Outdoors Truck Series will take to the road course at 12:30 p.m. on Sunday, Aug. 16, followed by the NASCAR Cup Series at 3 p.m. The trucks will air on FOX Sports 1 while the Cup Series race can be found on NBCSN.