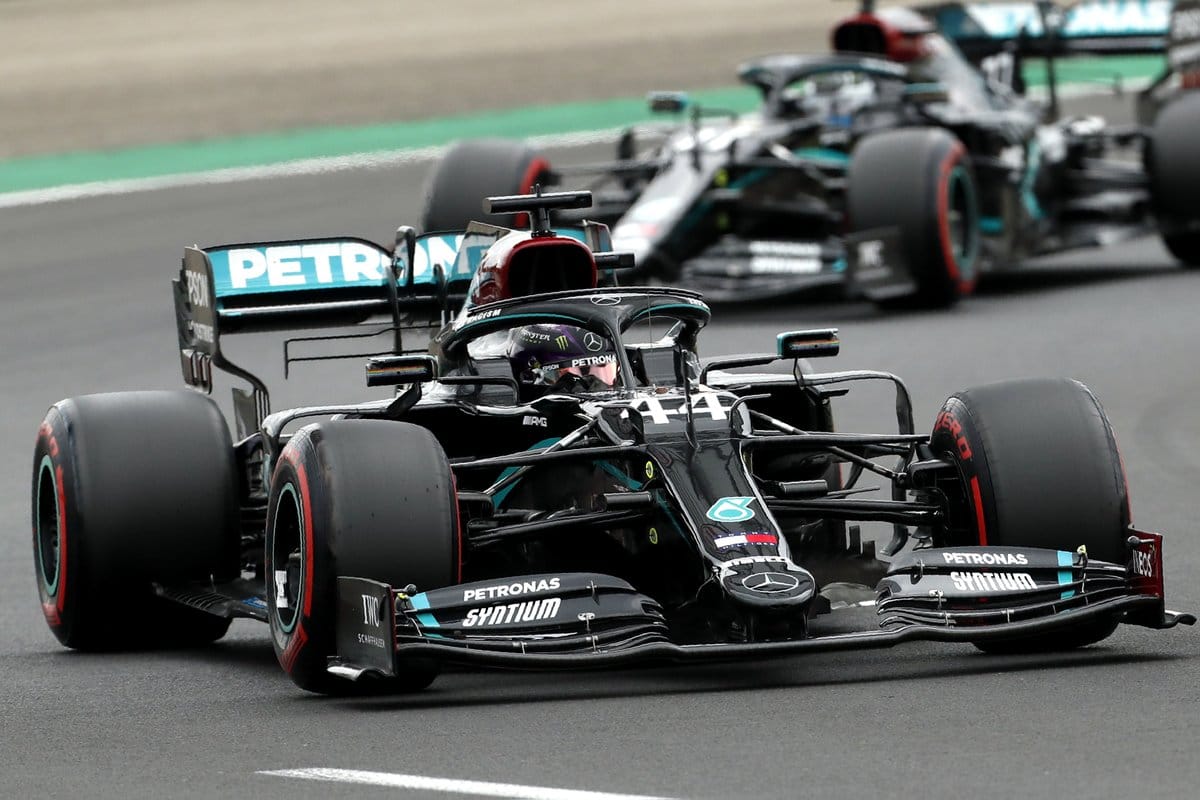 Lewis Hamilton did what Lewis Hamilton does, scoring the pole for the Formula 1 Spanish Grand Prix Aug. 15.  His pole allowed him to set the record for 150th front-row start, becoming the first driver to do so in F1 history.

Valtteri Bottas threatened his teammate Hamilton for pole but came in about .07 seconds behind.  Max Verstappen pushed his Red Bull to the third with a spirited effort.  His position broke up what could have been a top four comprised of all Mercedes-powered cars.

Instead, the two Racing Point drivers settled for fourth and fifth.  Sergio Perez returned from two weeks of a COVID-19 quarantine to race onto the second row, with Lance Stroll sliding into fifth.

Alex Albon of Red Bull drove a drama-free qualifying effort into the sixth spot, with the McLarens of Carlos Sainz and Lando Norris taking the seventh and eighth positions on the grid.  Charles Leclerc mustered all he could out of his Ferrari and could scrape only a ninth for his work.  Rounding out the top 10, Pierre Gasly continued to shine in his AlphaTauri.

For Hamilton, the pole is nothing more than a continued showing of what Mercedes and he can do.  That his teammate is acing the weekend thus far seems to serve notice that the Silver Arrows will be ready to atone for last weekend’s result when the team took second and third.

The big loser from qualifying could be argued to be Haas, which had shown excellent form through the first two practices but failed to muster anything, but Renault look to be the team really struggling. Haas has not shown anything all year whereas Renault often flirt with solid respectability.  But for the works team to muster only 13th and 15th illustrates just how far it has to go.

Esteban Ocon wrecked his Renault while trying to avoid Kevin Magnussen.  Ocon was on a flying lap, trying to sort his car for his qualifying effort when he ran up on Magnussen who was slow on the track while trying to find a gap for a flying lap of his own.  The two were fortunate not to collide but Ocon’s repairs were significant and the impact intense enough that he required a trip to the medical facility.  Magnussen and his Haas were unscathed.

The tidbit that emerged was that Romain Grosjean’s crew broke curfew and spent the night replacing his car’s power unit.  Because he is under the limits, there will be no penalty, but for a driver that had shone through the first two practices, a hiccup like this one could prove to be debilitating.

The Mercedes team again showed its strength and held down the top two spots.  While some believed that the heat might derail its performance and cause it to blister its tires, it seems that Pirelli reverting to the tires used at the Silverstone GP might mitigate this issue.

Grosjean, who followed his excellent FP1 performance with a similar one, endured power failure issues toward the end.

Mercedes re-asserted itself after their letdown last weekend in the 70th Anniversary GP.  It took the top two spots and was nearly a second ahead of Verstappen.  Slotting in behind were the two Ferraris, with Vettel finally scoring close to his rival teammate.

The most surprising team also sported Ferrari power, as the duo from Haas F1 clocked in at sixth (Grosjean) and ninth (Magnussen).

– Mercedes team principal Toto Wolff has stated during the weekend that he is having a “moment of reflection” regarding his time with the team.  Such a claim has led to speculation that Wolff may be looking to step down after this year.

Should Mercedes again see its driver and team with the championships, Wolff may be feeling a lack of challenge.  His resolve and steadfast leadership have kept the team at the pinnacle of success for six, going on seven, years.  There is little in the way of a challenge for him and he might be starting to think about his investment in Williams and how to help the struggling team.

This topic is all rumor at this point, and should he decide to leave then it will be time to celebrate and recapitulate his accomplishments.  For now, that piece can go unwritten.

– After driving his Ferrari with a new chassis, Sebastian Vettel has said that the car “is making more sense.”

Such a comment is striking. If the previous chassis had been so much of an issue for the German driver, what took Ferrari so long to discover that it was not performing up to snuff?  That Vettel posted such improved times indicates that his abysmal performance in the first five races may have been linked to a disappointing car.

What is worse is that Ferrari qualified so poorly for the Spanish GP, with Leclerc in ninth and Vettel in 11th, a performance that indicates there is something woefully amiss in the Prancing Horse’s camp.

The challenging thing with Vettel is that he has been so up and down over the past year-and-a-half.  One week he can look like a crafty and fast four-time champion, and other times he is baffling, making some of the dumbest moves one might imagine.

– The sport is planning on limiting the engine modes for the cars after the Spanish GP.  The proposed rule is meant to have cars drive in the same mode as they qualify.  The target seems to be placed squarely on Mercedes and its ability to turn up its engines to dominate qualifying and then dialing back during the races to improve reliability.

While Red Bull’s Christian Horner is all for the idea, saying the ban would be “healthy,” others wonder if the rule would do more harm than good.

The thinking is that Mercedes has such a gap on performance that even without a qualifying mode it can blister its competition, while its competitors would be trying to keep up without being able to switch to a higher short-term mode, causing it to fall further behind.

There is also the problem of unwanted outcomes and this rule looks like it will push for such a realization more than it might bring the field together.