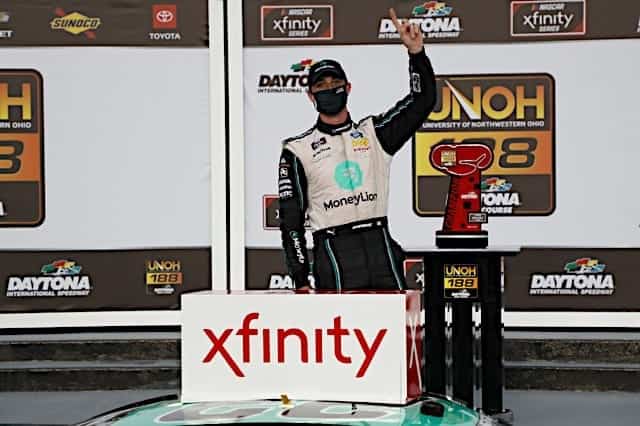 If there was a proper illustration to show how hot Austin Cindric has been in the NASCAR Xfinity Series, he would be a blazing furnace.

Despite the unknown nature of not having raced on the road course configuration before, along with a thunder and lightning storm that passed through, Cindric was on point throughout it all. He won the first stage, and barely lost out on a second stage win to Chase Briscoe. But Cindric was able to get away from trouble on a lap 43 restart, and pulled away from Brandon Jones on the following restart to certify his road-course excellence.

With the Xfinity Series regulars becoming better road-course drivers over time, it makes the concept of a road-course ringer not seem as threatening as in past days. But drivers like Allmendinger, Lally, Preston Pardus, Jade Buford and Earl Bamber proved that the regulars of the series should never let their guards down when taking these ringers on. Allmendinger has been in contention to win every road-course race he’s started this season. Lally’s fifth-place finish Saturday is his second in a row. Buford finished third in stage one. Pardus was running in the top 10 before getting wrecked on a late restart. By the performances of drivers like these on Saturday, I don’t believe the days of road-course ringers are done just yet in all three of NASCAR’s main touring series.

Things took a bad turn for Kaulig Racing on lap 11. Ross Chastain experienced mechanical issues on his No. 10 Chevrolet Camaro, crawling to a stop between oval turns 1 and 2. Soon after, Justin Haley lost control of his No. 11 Chevrolet Camaro approaching the bus stop and dug into the grass, briefly going airborne, before limping around and coming to a stop past the exit of oval turn 4. In anticipation of a yellow flag, Allmendinger brought his No. 16 Chevrolet Camaro down pit road for service. But the gas can stuck to the rear of Allmendinger’s car as he left his pit box, resulting in a one-lap penalty from which he quickly recovered. Chastain rejoined the race 18 laps down and finished 36th, while Haley finished last in the 38-car field.

Justin Allgaier seemed to have a top-five finish locked up and put away. But on the final run to the finish, a mistake by Allmendinger resulted in Allgaier spinning around in turn 6, losing many positions in the process. Allgaier still wound up ninth but was visibly frustrated with Allmendinger by virtue of his verbal exchange with him on pit road post-race. Allgaier is still over 200 points above the cutoff line for the playoffs, but a better finish still would’ve been desirable in a not-so-desirable season.

Two particular spots on the track proved to be the Achilles’ heel for the majority of drivers: turn 1 and the bus-stop chicane. On the final two restarts, turn 1 proved to be nothing but absolute mayhem. Several cars would overshoot turn 1, spin around and get damage on both restarts. But the one who hurt the worst from it was Briscoe, whose shot at victory was taken away after getting involved in a crash on the first restart attempt. The bus-stop chicane also claimed many victims as well, with drivers dipping just a little too low below the curb, digging into the wet sod and having catastrophic results. Haley, Josh Williams and Bamber were the three most notable victims of this area of the track, all catching some hang time as their front ends would get torn to pieces.

Out of the many contenders to be featured in this segment, Jeremy Clements gets the top mention. Clements followed Haley through the grass and off the track in the bus-stop chicane, making contact with the tire wall in his No. 51 Chevrolet Camaro. But fortunately, that was the only incident Clements was a part of. He prevailed over misfortunes of several of the top runners and leaves DIS with a solid sixth-place finish. With Brandon Brown retiring late in the going, Clements closes in on Brown in the points standings, just 28 points behind the cutoff. With time ticking away toward the regular-season finale, this is the kind of medicine that Clements and his team needed.

Other honorable mentions include Josh Bilicki, who tied his career-best finish of 12th, Bayley Currey, who led on the penultimate restart and earned a career-best finish of 14th, and Bamber, who ran well early on in his Xfinity Series debut but finished 33rd after tearing up his No. 21 Chevrolet Camaro through the grass in the bus-stop chicane.

“Plain and simple, he (Allmendinger) just made a dumb decision. … It’s not the first time AJ’s wrecked me, and it’s just hard when the same guy wrecks you over and over again.” – Justin Allgaier

“He (Allgaier) should be mad, it’s my fault. … I had the Lally pass done, and as soon as I touched the brake pedal it started wheel-hopping, and I got into him. … I apologize to he and his race team.” – AJ Allmendinger

With COVID-19 forcing both Sonoma Raceway and Watkins Glen International to cancel their race weekends this year, NASCAR did everything in their power to fill in that road-course void. And for this weekend, it has worked out well. Saturday’s race did have plenty of wild and chaotic moments from green to checkered. But different situations call for different measures. Therefore, this race weekend at the DIS road course should only be treated as a one-time occurrence. By next year, fans living in northern California and upstate New York can have something to look forward to when NASCAR returns to those racetracks again. To Cindric though, his plans to win will not change.

Next weekend, the Xfinity Series will take part in two doubleheader races at Dover International Speedway in Dover, Delaware. The first running of the Drydene 200 is scheduled for Saturday, Aug. 22 at 12:30 p.m. ET, while the second running is scheduled for Sunday, Aug. 23 at 1 p.m. ET. NBC Sports Network will handle television duties of both events.