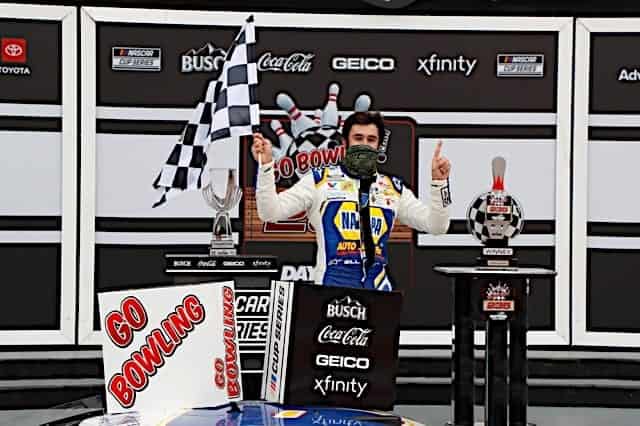 To have a chance at getting past Chase Elliott, the rest of the field needed a caution late in Sunday’s (Aug. 16) NASCAR Cup Series Go Bowling 235 at the Daytona International Speedway road course.

Even then, eliminating Elliott’s 10-plus second lead coming to a restart didn’t matter.

Elliott won his second points event of the season and third road course event in a row, beating Denny Hamlin by about half a second to the start/finish line ahead of Martin Truex Jr., Jimmie Johnson and Chris Buescher in a race delayed for roughly 30 minutes due to a lightning delay.

It's never too early to be thinking about those #NASCARPlayoffs points. @chaseelliott | @TeamHendrick pic.twitter.com/12venNwFEA

Truex’s finish didn’t come without having to persevere. He was penalized for being too fast exiting pit road near the end of the second stage and had to serve his penalty to start the third stage. Even so, he fought his way forward to finish third.

#NASCAR … Denny Hamlin said he, Kevin Harvick, Martin Truex Jr., and Kyle Busch – the top 4 starters – got to together before the race & discussed where they would brake entering Turn 1 on the start to "make sure we didn't look like a bunch of dummies" by wrecking.

Elliott led the most laps, doing so three times for 34 laps. In fact, he led all but four of the race’s final 44 circuits. He also won the first stage, electing to stay out near the finish of the first segment as other front-runners pitted.

Making history for Hendrick Motorsports. @chaseelliott's big win makes a statement as the organization becomes the first ever to visit victory lane after racing at the @DISupdates Road Course! pic.twitter.com/UKGtbCEAt7

Clint Bowyer finished sixth, a spot ahead of Kaz Grala, filling in for Austin Dillon, who missed the race due to a positive COVID-19 test.

The rest of the top 10 was filled out by William Byron, Joey Logano and Michael McDowell.

While it was a strong day all around for Johnson as he seeks to stay in position to get into the playoffs on points alone, it was the exact opposite of a day for Kyle Busch. His season of discontent continued on Sunday. Busch went off the course twice, had to go to the garage for a mechanical issue in the final stage while running second and cut at least one tire down with six laps to go, bringing out the late-race caution. Busch was credited with a 37th-place finish.

Why @KyleBusch has a tire issue ?@SNICKERS

Team Penske’s top road course wheelman, Ryan Blaney, ran as high as third in the second stage but ended up 31st. He’s just one of a trio of Cup drivers to win a road course since 2018: Truex and Elliott are the other two.

The NASCAR Cup Series is back on track next weekend for a pair of events on Saturday and Sunday, Aug. 22-23. Both are scheduled for 4 p.m. ET on NBC Sports Network.

But how did bubba do !

Chase is a very good road racer. Kyle is going to miss the playoffs. This track is boring.

Nice of Baby Busch to bring out a caution to give Denny a last chance to win.

It looked like the 77 was trying to get dirt on the “racing” surface so he could do his job.

Ryan Blaney did NOT win the second stage. Does anybody at FS even watch the races?

Do you honestly expect an explanation ! Tomorrow bubba will have an offer to drive the 48, per bubba.

They start counting the laps at the first lap the leader passes the yellow flag. In both cases, they were already past the flag for lap 16 and 31.

The Blaney fact error has been corrected. Our mistake.