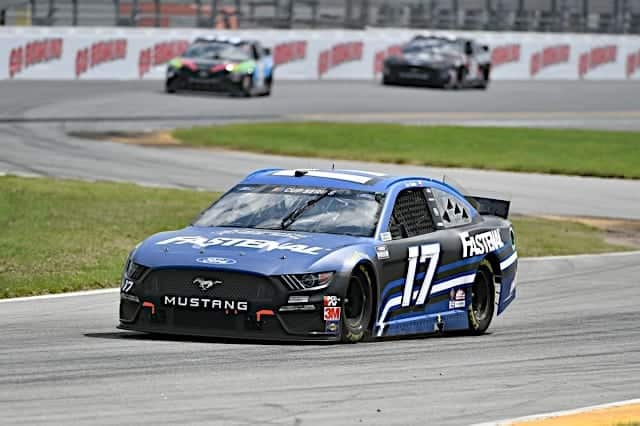 Chris Buescher vaulted several positions on the final restart of the Sunoco 159 at Daytona International Speedway’s road course, hanging onto the fifth-place spot to record just his second top-five finish of 2020.

Buescher started 21st for the first-ever NASCAR Cup Series event at the track’s road course but quietly worked his way up through the field to seventh before the final restart of the afternoon.

“It was a fun day,” Buescher said in his post-race interview. “All four corners are beat off the Fastenal Ford.”

Top 5 for @Chris_Buescher! Heck of an effort by the @FastenalRacing team to get up front at the end there! pic.twitter.com/yd5uAtL3Gk

That seventh-place starting spot paid dividends for Buescher, who knifed his way past William Byron, got past Clint Bowyer and battled with Martin Truex Jr., all before settling into fifth.

2020 has been a rough year for Buescher and Roush Fenway Racing as a whole – teammate Ryan Newman hasn’t scored a top-10 finish since Daytona, where he finished ninth as his car slid upside-down under the checkered flag.

The 2020 season marked a dual reunion of sorts for Buescher – he and Ricky Stenhouse Jr. swapped teams, the former hoping to find more success at RFR, the team with which he won the 2015 Xfinity Series championship. The move also reunited Buescher with Fastenal, one of his primary sponsors during that 2015 season.

Buescher finished third in the season-opening 500, and it took until the series returned to Daytona for him to get his second top-five effort. In between, he managed a sixth at Talladega Superspeedway and 10th at the first Charlotte Motor Speedway and Pocono Raceway races, but otherwise hadn’t found much success.

Historically, Buescher’s results on road courses tend to swing positive – nine of his 12 road course starts have resulted in top-20 finishes, and Sunday’s race marked his ninth straight. That streak dates to joining JTG Daugherty Racing for the 2017 season.

Buescher and the rest of the field will head to Dover International Speedway for another doubleheader weekend, where he has a best finish of 18th. That result came in his first race there, during his 2016 rookie season with Front Row Motorsports.