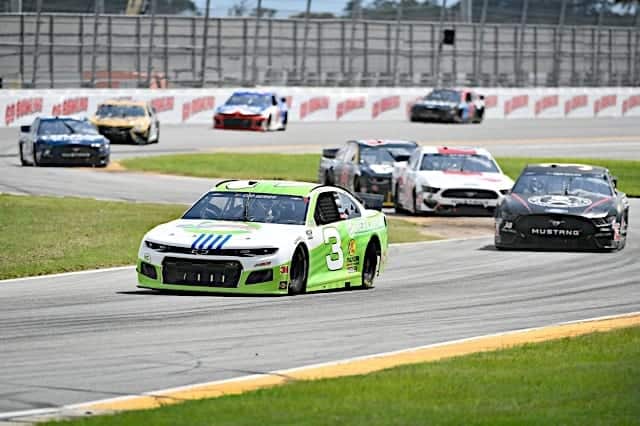 Kaz Grala wheeled the No. 3 car of Richard Childress Racing to a seventh-place finish in the Go Bowling 235 Sunday, Aug. 16, at the Daytona International Speedway road course.

Grala was tagged to substitute for Austin Dillon after Dillon tested positive for COVID-19.

Even though 21-year-old Grala had no experience in a Cup car, that was OK, as it was everyone’s first Cup race at Daytona’s road course. After lightning delayed the race at about the halfway point, the NBC broadcast noted how Grala had held strong in the first half and didn’t make any mistakes.

Later, as the field made its green-flag pit stops, Grala stayed out and inherited the lead with about 15 to go. He stayed in front for three laps before he and Alex Bowman finally made their final pit stops.

He returned to the track in the top 15, but the caution came out with five laps to go and bunched the field up. Some other cars in front of him pitted during this caution, which allowed Grala to gain more positions. He then held strong on the restart and brought the car home clean in a respectable seventh.

“Today we were really able to drive up there into the top 10 and finish seventh, which I never would’ve even imagined,” Grala told reporters in a Zoom call after the race. “It’s crazy to even be saying, but to me, I think that proved more a point than anything has previously in my career. I enjoyed the race so much and I hope to someday get a shot again in this series.”

"This is far beyond my wildest dreams for this race." @KazGrala says he finished 23 positions above his expectations, was hoping for a top-30 finish.

Grala is a part-time driver in the Xfinity Series for RCR, starting two races thus far this year at Kansas Speedway and Road America, finishing fourth at the latter.

The late caution worked well for him when some in front pitted with five to go. Good going.

That’s how Bubba gets his higher than usual mid 20s finishes.

Good to know I’m not the only one to notice that. He will often throw a Hail Mary at the end of a race, and sometimes it works. Most of the time it does not. I am not sure what happened to him yesterday. He was in the top 10 by virtue of not pitting on that final restart (3 to go) and they even mentioned it on TV, but by the end had dropped to 25th. When you know you don’t have a chance to win, a Hail Mary is your only option.

Bubba seems to go down the standings the longer a run is. There was one event where he restarted fourth or fifth and wound up down a lap because there were no cautions to help him.

Bubba, taking Danica’s place in the “prepossess category.” Not that he doesn’t deserve it.

The kid drove a good race. Hope he gets to run more road races. Made an exception and watched this one because I was curious how they would configure the course. Interesting with two chicanes. Only had one when I raced there.

As a CT native myself, I have to ask… You aren’t Don LJ by any chance?

Think what Childress’ cars could do on a regular basis if he put real drivers in them rather than the grandkids.

Bill B
Reply to  Ron

Yep, Reddick has been more impressive in his rookie year than Dillon ever has.