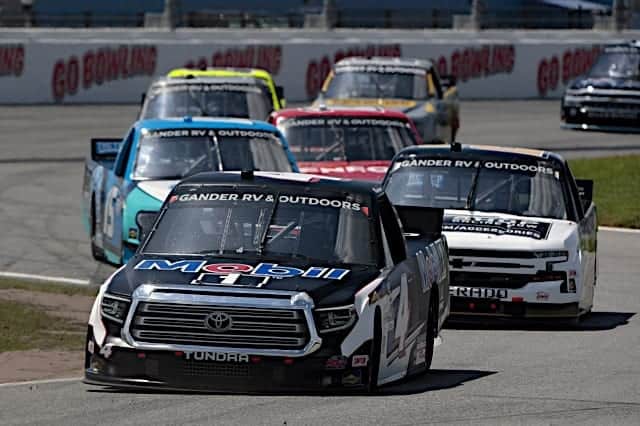 Raphael Lessard continues to improve as a rookie in the NASCAR Gander RV & Outdoors Truck Series.

Lessard has steadily improved over the past four races. He finished 16th and 11th, respectively, in the Kansas Speedway doubleheader. Now he has posted back-to-back new best finishes.

“The race was awesome,” Lessard told media members in a post-race Zoom conference. “It was a weird situation because no one in NASCAR has been here before. That’s what it has been like for me every race so far this year. Being a rookie with no practice, the first lap of every race is a first for me. It was an advantage for me for this race because I am used to it. TRD (Toyota Racing Development) allowed us to go to the simulator and practice on the road course. That made a big difference for me.”

With the new algorithm to set the starting lineups, Lessard started the race in 10th. As the first stage neared its end, Lessard and crew chief Mike Hillman Jr. opted to pit for tires and fuel, forgoing any stage points. He finished the second stage in seventh.

On the subsequent restart on lap 27, Lessard took the lead and led three laps. However, on lap 29, as he fended off teammate Alex Tagliani and Matt Crafton, Lessard missed a chicane. Per the rule, he came to a complete stop, forfeiting the lead.

“In the lead, you had to push pretty hard to keep up with the guy behind you,” Lessard said. “On one lap, I went just a little bit harder than the previous lap. With the heat on the tires and brakes, it got a lot slicker at the end. It surprised me; I thought I was going to make the corner. I stopped quickly, but I made a mistake.

“We came back and regrouped,” he continued. “We never gave up, kept pushing hard at the end, and had a good strategy. I don’t think we had a shot there at the end. The No. 2 [race winner Sheldon Creed] was really fast. I was trying to be a bit conservative and bring my No. 4 Toyota home.”

The Sunoco 159 was Lessard’s second career Truck Series road course start. He previously competed in the 2019 race at Canadian Tire Motorsport Park, where he finished ninth after starting 10th. Lessard prepared for this race by watching videos the previous day.

.@raphael_lessard goes into this weekend on the road course at Daytona with two road course races under his belt. He explains how that experience will help this weekend.@Mobil1 | @ToyotaRacing pic.twitter.com/jgnBgKctWr

Leaving Daytona Beach, Fla., Lessard carries momentum with him as the Truck Series next heads to Dover International Speedway.

“It’s about working hard. I’ve wanted those results since the beginning of the season. We’ve kept working and I think it’s coming. With the new rules, we’re going to start pretty close to the front, which is helpful. I’ve been there before – last year, in my second race with KBM. We’re ready. I love Dover, track position is super important.”

In his lone start there, the 19-year-old Lessard finished 11th after starting seventh.

Four races remain in the Truck Series regular season. Lessard currently is 13th in the championship standings, 55 points below the playoff cut line. Neither Lessard nor his rookie teammate Christian Eckes has won this season, though Eckes is fifth in the point standings. Lessard is confident he can win this season to make the playoffs.

“Matter of time for sure,” Lessard said. “We’re a team capable of winning. I’m doing everything I can – studying, watching videos, and asking questions. [Team owner] Kyle Busch is helping a lot. It’s just a matter of time. We’re pushing hard for it. At this point in the season, we’re not racing for stage points, we’re racing for the win. That’s what we’ve been doing the past three races and we’ve had our best finishes. We’re heading in the right direction.”