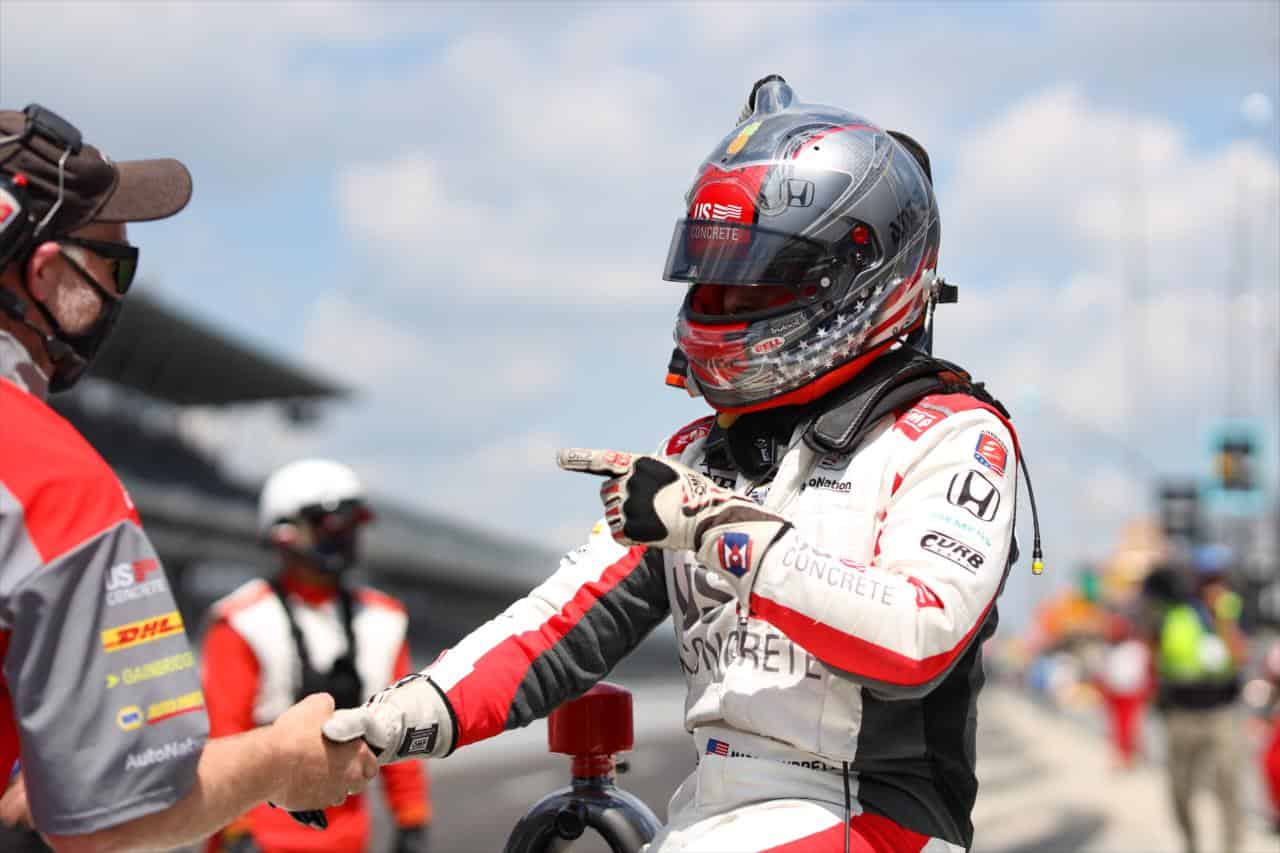 The Greatest Spectacle in Racing

At long last this weekend, and for the first time ever not during the month of May, it’s the Indy 500 — the Greatest Spectacle in Racing. It’s a nickname that is more than well-earned for a race which to me is easily the most mesmeric in all of motorsports, whatever the discipline. 200 white-knuckle laps at 200-plus mph on the fabled 2.5-mile rectangular oval for a pint of milk and the chance to kiss the strip of bricks. Seems like a fair trade. Adding to the excitement this weekend is the fact that veteran Marco Andretti is on pole, just the sixth of a 15-year, 240-race career that never quite hit the heights his rookie year coupled with the family name suggests it might have. There’s no question, however, Marco’s pole was a popular result with both fans and his fellow competitors as evidenced here.

I watched all of the @IMS #Indy500 Fast Nine Quals with the fans OUTSIDE the tracks. You tell me if you think @MarcoAndretti on the pole is popular!! pic.twitter.com/4xw6CvZluM

Back in 2006, his rookie year, Andretti lost the 500 in the last 150 meters — a heartbreaking end to the race, and for some, a continuation of the Andretti curse at the famous old venue and here’s a great summary of that moment:

Whether Andretti can do what his Dad, Michael, never could and his famous grandfather Mario could only manage once remains to be seen. But even without fans in the stands, it would be a result that would echo sonorously all throughout the racing universe. Either way, I can’t wait to watch, albeit three months later than expected.

Next up, it’s a double helping of monster-sized trouble, with 622 laps of the 1-mile high-banked concrete oval of Dover International Speedway over two long, hot weekend afternoons. And I can’t help but feel that this is the absolute best shot for Jimmie Johnson to either get that long awaited win or, just as importantly, make up his playoff points deficit, currently at 25 markers. Johnson, let’s not forget, at Dover has one of the most impressive set of single-track results of any driver anywhere: 11 wins, 17 top fives, 25 top 10s and 3,110 laps led in 36 starts. No one else comes even vaguely in the same zip code. Johnson’s closest competition to the playoff berth is actually his teammate William Byron, who has a much smaller sample size at the Monster Mile finishing 14th, 19th, eighth and 13th in four attempts. All told, those are fairly solid results for Byron, and wouldn’t it be ironic if Chad Knaus’s accumulated knowledge stopped the man he helped make a seven-time champion miss one more final run at glory?

Another weekend, another win for Lewis Hamilton, his fourth in six races this year and the 88th of his illustrious career. Hamilton now sits three shy of all-time leader Michael Schumacher (91 wins), and it seems as if it’s not so much a question of if but when the six-time British champion finally beats what many thought might be an unbreakable mark. Hamilton also holds the current record for pole positions — 92 and counting — and you’d figure he’s not done there. Finally, Sunday’s win saw him eclipse the record for podium finishes (156, also still counting). Hamilton needs one more title to draw level with the great Schumacher, and the way this season is looking, you have to feel that this is something he’ll get done this year. Then, with the car the same largely for 2021, you would have to say he’ll be the favorite next year as well. In short, we’re watching arguably the greatest F1 driver in history. Yes, his car is dominant, but you have to get the wins. You don’t just get given a podium position for starting your engine after all. It is rare that you see true greatness in racing, and fact is there are only really a handful of truly iconic and legendary names. Hamilton, no question, is in that conversation.

Just a quick word on Sunday’s substitute track, the Daytona Road Course. I for one am a fan, not least with the run time of just over two-and-a-half hours. Helping that was the fact that there weren’t that many on-track incidents in the race, especially when compared to the Xfinity wreck-fest the day before. Even with a lot of green-flag racing, I still found it really interesting to watch. Assuming Watkins Glen International and Sonoma Raceway return next season, and there’s no reason to think they won’t, it might seem like the plate is full with three road courses, but given we now have a road course in the playoffs, the series could easily stretch to four races where drivers turn left and right. This season, unlike any other before it, has seen a whole slew of changes with mid-week races, doubleheaders and no practice or qualifying in particular. And I have to say, the Daytona Road Course is one change I’d look to make permanent if I was the boss, which I realize of course I am not. Stay tuned, as they say.

And finally this week, this column has always, repeat always, celebrated the underdog success stories. We saw another of those with Kaz Grala’s seventh-place run in his debut Cup race. Filling in for the COVID-19 afflicted Austin Dillon, Grala drove a smart race all the way to a very unexpected finish.

“Going into the race, I thought if I could complete all laps, I felt like I could get a top 30,” Grala said of his efforts. “That was what I was looking to do. So really, the mentality never changed throughout the race, I still wanted to complete all the laps, minimize mistakes, and I feel like we were able to do that.”

And it’s accurate to say he did just that. Here’s hoping he gets another shot at the Monster Mile this weekend if Dillon is not recovered in time.

Great writing. I was reading an Associated Press racing article Sunday and was astounded at the mistakes in spelling, grammar, punctuation, etc. Meanwhile, while I know that this is not “newspaper” writing, it is still intriguing and interesting. I always enjoy reading your work and this column in particular.

I have to agree Mr. Farmer.