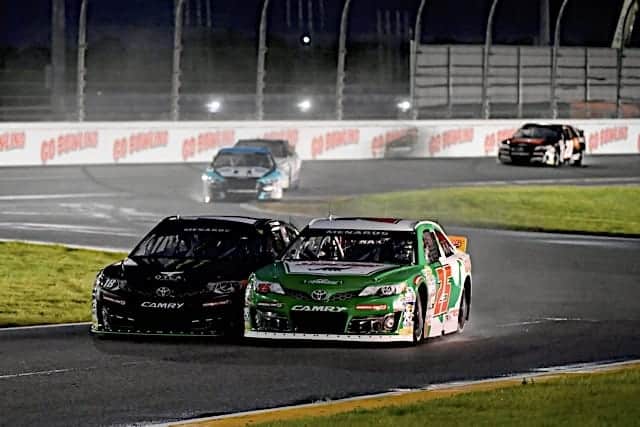 The ARCA Menards Series was the first series to hit the Daytona Road Course Friday Night (Aug. 14). Michael Self has always prided himself as a road-course driver, and it showed during the inaugural race on the Daytona Road Course. The performance Self put on Friday night not only padded his ARCA Menards Series points lead, but also took the Sioux Chief Showdown points lead. His Venturini Motorsports teammate Chandler Smith had a rough evening, spinning twice during the race and finishing ninth.

Sam Mayer fractured his wrist last weekend at Road America, but despite the pain of having to shift with the fractured wrist, he was still running solidly when he handed the reigns over to Colin Braun. Braun battled for the lead early in the second half of the race, but the No. 21 fell back to third, and that’s where he stayed, giving Mayer his seventh top-five finish to match his career high.

Ty Gibbs was vocal following Friday’s race in a positive way despite being visually frustrated. Gibbs called out the haters that think he’s a brat, stating that he’s just very passionate about racing. That passion has led him to have a successful part-time season in the No. 18. Friday was his second runner-up finish of 2020, and he’s now seven points behind in fourth in the Showdown standings.

He wasn’t expected to race at any of the road courses in 2020, but Bret Holmes showed up Friday. He was in a Ford for the first time in his career, running an old Ken Schrader Racing car. Though an eighth-place finish wasn’t ideal, the bigger picture was on display. All he needed to do was stay within reach of Self in the ARCA point standings. He’s 16 points behind Self now as the series heads to St. Louis. Holmes is 14 points away from the lead in the Sioux Chief Showdown.

East Series Standouts: Gibbs led the way in Friday’s event at Daytona, while, as noted above, Braun helped Mayer tally a third-place finish. The No. 74 team had Ayrton Ori behind the wheel this weekend making his ARCA Menards Series debut. Ori had a solid run going until he locked it up late in turn 1, blowing a tire, and had to go all the way around the track with a flat. He was relegated to a 17th-place finish.

The ARCA Menards East Series heads to Dover next weekend for their first event since Toledo in June. Mayer said he believes he’ll be ready to roll, since Dover doesn’t require as much shifting as the strenuous road-course racing.

West Series Standouts: Taylor Gray led the way for the West Series invaders to finish the race in fourth. The fourth-place finish was his fourth top-five finish in five career races, and was just one position away from tying his career-best result. Gray used his experience in the two races in Utah in the West Series to capitalize on another strong finish. Steve McGowan’s team returned for the first time since race one at Phoenix Raceway, with Will Rodgers finishing the race in fifth.

The ARCA Menards West Series returns on Aug. 22 at Colorado National Speedway for the ENEOS 150 presented by NAPA Auto Parts.

Will this race be televised again since it was delayed over 3 hours for live TV?