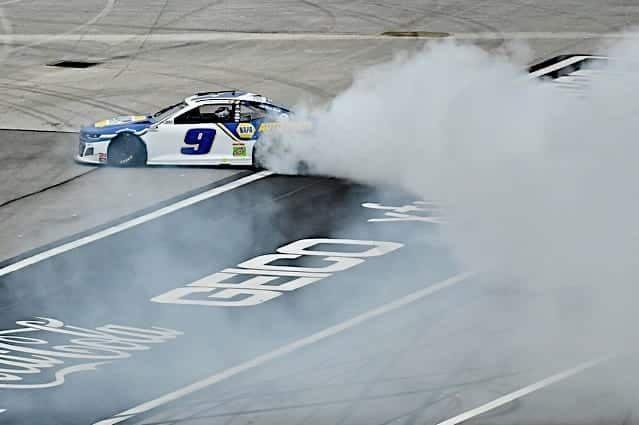 When it comes to road course aces, Chase Elliott wasn’t really the first name that came to mind entering this weekend’s inaugural Go Bowling 235 on Daytona International Speedway’s infield road course. But he might be now. Elliott won the first stage and dominated the final one en route to the victory. If you’re keeping track, it’s his third straight win on a road course. The last time anyone else won making right turns was 2019 at Sonoma Raceway when Elliott suffered an engine failure and Martin Truex Jr. grabbed the win. The win puts Elliott on a roll with the playoffs looming and one more road course, the Charlotte Motor Speedway ROVAL, on the docket this fall.

If Elliott was under the radar entering the race, Chris Buescher was downright invisible. Buescher’s road course average finish was just 20.3 before this weekend with a top finish of 11th at Watkins Glen International in 2017. Buescher deserves a shoutout after his late-race performance was good for a top-five result. His fifth-place finish was his best this year for Roush Fenway Racing since posting a third-place run in the season-opening Daytona 500.

What… was the number to watch and its importance?

When we look at statistics, there is always a lot to take into account: the number of starts a driver has made, recent performances, loop vs. traditional data and more. Generally, the stats of note entering a race for drivers include wins, top-five and top-10 finishes, average finish, lead-lap results and maybe DNFs.

Well, this week, all that went out the window, because NASCAR’s national series have never raced at the Daytona infield road course before this weekend. And without so much as a practice time to go by, the only number of relevance was overall road-course statistics. However, Daytona is unique enough that it’s hard to apply numbers from tracks like Watkins Glen or Sonoma. That means the number this week was zero, which was also about the level of clue we had before the weekend as to what would happen in this NASCAR event.

Polesitter Kevin Harvick is an underrated road racer, with a couple of road wins to his name, and he’s been so strong this year he could be a factor about anywhere.  But while Harvick had perhaps the scariest moment of the race, when he spun across a hairpin turn to find himself sitting backward as the entire field flowed around him, the 2014 Cup champ wasn’t a factor at the end. He finished 17th, his worst performance since a 26th at Homestead-Miami Speedway in June. Harvick still holds the point lead with three races left in the regular season, putting him in position for a bunch of playoff points after the series returns to Daytona in two weeks for a crack at the oval.

Active road course win leaders Kyle Busch and Truex both looked like contenders at one point or another on Sunday.  Busch led one lap and was fighting for a top spot in the final stage when a brake failure sent him to the garage with fewer than 20 laps remaining. He got back on track, already multiple laps down, and then a late crash put an exclamation point on his bad luck for the day. Busch finished 37th and scored a grand total of one point.

Truex has proven to be a favorite anytime right turns are involved, and he led 10 laps Sunday. However, a penalty for speeding on pit road proved very costly as he had to start at the back of the field for the final stage. The stage had very few caution periods, limiting the ability to reclaim lost track position. Truex charged through the field, but fell just short, winding up the race in third place.

Stage two winner Denny Hamlin isn’t the first name to come to mind on a road course, but he is when it comes to Daytona. This year’s Daytona 500 winner proved he could be just as competitive on the road course as on the oval. Finishing second after leading 16 laps Sunday, Hamlin continues to show few weaknesses this year while remaining Harvick’s chief championship rival.

Yes and no. Busch is still pretty solid to make the playoffs unless his woes continue and drivers outside the top 14 win in the next three races. However, a look at Busch’s season, compared to his 2019 playoff run, hints at a tougher row to hoe.

Busch has been solid if unspectacular this year; only Hamlin and Harvick have more top-five finishes than he does. But he doesn’t have any playoff points to fall back on.

Last year, it was those bonuses that carried Busch through the first three rounds.  He didn’t win a race between the second event at Pocono and the title race at Homestead, skating around trouble to make it into the Championship 4. Without those playoff points, he might not have advanced.

It’s still hard to imagine that Busch won’t win a race. But he also needs to be consistent in the playoffs, and he hasn’t quite done that yet. The veteran needs a little momentum, and he’s running out of time to find it if he hopes to defend his title.

You know who’s having worse luck than Kyle Busch this year?  Jimmie Johnson.  Johnson made some gains this week, but he’s still 25 points outside the playoff window and with at least one wild card race to go, playoff hopes are dimming for the seven-time champion. He’ll need a Hail Mary to make one final playoff appearance, and while he’s had speed at times, it hasn’t been winning speed recently.

There’s a doubleheader at Dover International Speedway this weekend. For Johnson, who dominated a decade in NASCAR, he was most dominant at the Monster Mile. He’s won 11 times in his career, a track high, and led over 3,000 laps at the track. And while Johnson has about as good a shot as anyone at winning in Daytona in two weeks, Dover is his playground. Can the No. 48 team put a bullet under Johnson for one more win at the track that’s been so good to him over the years? They’ve got a little momentum after Sunday’s top-five performance.

How… about we do this again some time?

Daytona’s road course raced surprisingly well for the stock cars (and trucks). Despite terrible camera decisions from the broadcasts, the races were entertaining and different drivers showed their skills. It would be worth considering racing here again, not at the expense of Watkins Glen, but perhaps in addition to it. Should Daytona give up an oval race the way Charlotte Motor Speedway did? Maybe. There are certainly arguments to be made.

At the bare minimum, the road configuration will be used for the Busch Clash next year.

But why not for a points-paying event? It’s possible, particularly if NASCAR can find a way to rotate some different tracks into the schedule in the future. The more different tracks we see, the better off everyone is.

oh the meltdown that will happen if kyle busch doesn’t make the playoffs. he is one driver definitely not liking an on track practice.

i was surprised there wasn’t a wading up of cars on the first lap.

There was a meeting of the four drivers starting in the first 2 rows before the start of the race to discuss how to get through Turn One without mistakes. Harvick, Hamlin, Truex and Kyle Busch.

And as other media outlets noted, the Cup drivers did an excellent job of getting through the road coarse with very few mishaps all day even without practice.

As for Busch, contrary to what you posted, he would LOVE on-track practice before the race.

Jo – oops i mean not liking not having on track practice. next time brain and typing will be engaged. sorry about that.

If Amy thought Chase Elliott was “under the radar” as a road coarse ace, she just hasn’t been paying attention. Even the bookies had him as the favorite. Maybe Amy should spend more time watching the front of the field instead of her beloved backmarkers.

These writers can talk about playoff implications all we want, like its some kind of big thing, but is there really more than 4 or 5 that have a legitimate shot at the title (and I include Busch in that number)? Everyone knows who they are. Even if Johnson gets in, he’s not going to do much. And one might argue that he hasn’t been a victim of all that much bad luck. He just needs to retire before he goes into Waltrip territory.

There is no way on gods green earth that they sacrifice a plate race at Daytona for the road course. They would replace one of their other races (preferably Kansas or Chicago) to make it work.