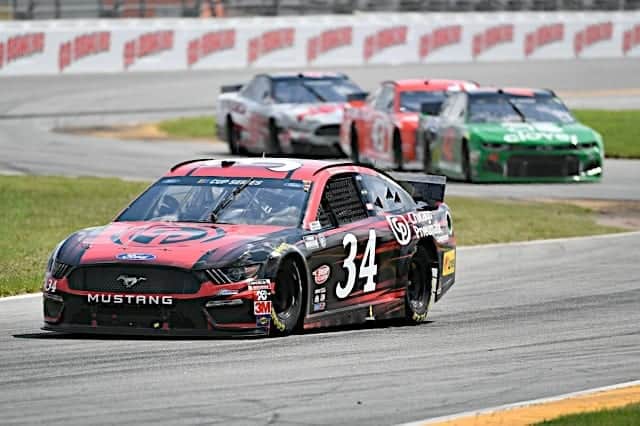 Michael McDowell is an accomplished road racer, so he always seems to have a better shot than most underdogs when the NASCAR Cup Series has to make a few right turns. With no one able to practice on the Daytona International Speedway road course prior to the start of the race, the often disadvantaged McDowell arguably had a leg up on most of the field with his skillset. The last time he had such a level playing field, he parlayed a 2016 Xfinity Series race at Road America into his first major NASCAR victory.

McDowell was able to turn this advantage into a top-10 run, bringing his No. 34 Front Row Motorsports Ford across the stripe in 10th place. It wasn’t only how well he had done, but McDowell actually ran better than that for much of the event, getting as high as third.

Afterwards, McDowell spoke about the result.

“It was a decent day. We had high hopes, which is good. You should come to places like this where we have a lot of experience and track knowledge. Unfortunately, we started really deep in the field and we were able to drive up to the top 10 there before the end of the first stage, and then we talked about it and it was all about trying to win a race for us. We didn’t try to get stage points. We came in with a few laps to go and we were able to get into the top five and get to third. I saw those rain clouds coming and I thought that was exactly what I needed. I was hoping that it would rain because I have experience on this course in the rain and the others guys don’t really. We lost a little bit there at the end and got passed by guys that had fresher tires. We still managed to get in the top six or seven, and then that caution came out with five to go. We knew we weren’t going to beat Chase [Elliott] and those guys up front on the same tires, so we just took tires.”

Ty Dillon wound up being the only other top 20 finisher among the underdog teams, as he came home in the 20th position.

McDowell would not have been a top-10 finisher if it weren’t for the misfortune of Bubba Wallace. Wallace found himself in eighth place at the white flag, but only made it to turn 1 before contact sent him off course. Wallace righted the ship, but was 23rd by the time he made it to the finish line.

The NASCAR Xfinity Series was the first to take to the 3.6-mile road course on Saturday afternoon, and a lengthy list of drivers had solid runs. As anticipated, Andy Lally was stellar, finishing fifth, and Jeremy Clements knocked out a sixth-place result. Teammates Myatt Snider and Ryan Sieg came in 10th and 11th, respectively, with Josh Bilicki in 12th. Tommy Joe Martins picked up his fourth consecutive top 20 in 13th position, and Bayley Currey overachieved yet again for Mike Harmon Racing as he was 14th at the end.

The Gander Outdoors Truck Series proved that I don’t always get my predictions wrong. Parker Kligerman was the top dog with his eighth-place showing, followed closely by Scott Lagasse Jr. in ninth. Austin Wayne Self also enjoyed a successful outing, ending the race in the 11th position.

Another doubleheader looms for the Cup stars this weekend. The Monster Mile at Dover will host a pair of 311-mile races that will set the stage for the regular season finale at Daytona.

For the Cup cars, I anticipate a decent day for Dillon. In Xfinity, Josh Williams could have another standout performance. And as for trucks, keep an eye on Tate Fogleman and Spencer Boyd to potentially break into the top 15.

P12 at the inaugural @DISupdates road course! Pushed hard for a top 10 finish but ran out of time at the end of the race. Pleased with the result and happy to have another great points day for @TeamBJMcLeod! pic.twitter.com/BtA3xBzJut

.@pkligerman reminded they aren't running this truck next week, told to put his elbows up

??? BOLO STOLEN???
PLEASE READ INFORMATION BELOW
CAL YOUR LOCAL POLICE
DEPT IF YOU SEE OUR HAULER AND DULLEY!!!
Someone knows something!!! pic.twitter.com/TIx8IfFQLm

Tough day today. My AC failed and I was way overheated, I made the decision to get out in hopes of saving a good finish for @xbox nascarheat 5. Today was the first time in my 16 year Nascar career that I had to get… https://t.co/iaqzQjUbk8

Gotta always get Bubba in there somehow. He actually finished 25th.