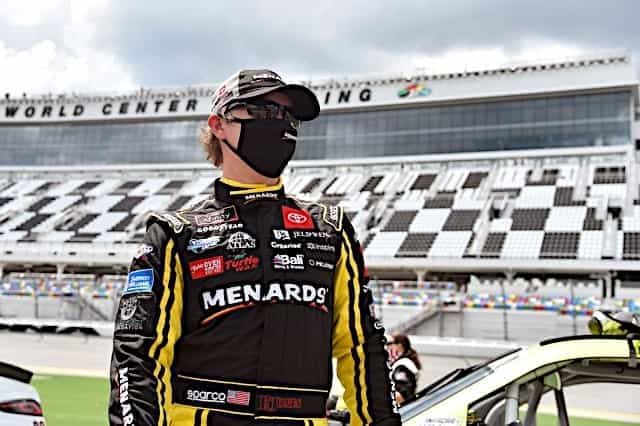 Brandon Jones may just be one of the most improved drivers over the course of the past year. In October 2019 at Kansas Speedway, Jones survived as the leaders wrecked on a late-race restart, and he went on to win his first career NASCAR Xfinity Series race. Since then, the 23-year-old, now in his fifth full-time Xfinity season, has won two more Xfinity races (Phoenix Raceway and Kansas earlier this season) and scored seven more top fives. He only had seven career top fives prior to his first Kansas win. Additionally, Jones picked up his first career Gander RV & Outdoors Truck Series win this summer at Pocono Raceway after racing in the series part-time since 2013.

Jones accomplished another career-first this past weekend at the Daytona International Speedway road course. He picked up his first road course top five, finishing second to Austin Cindric.

Jones caught up with Frontstretch to discuss how he’s improved behind the wheel, his missed opportunity when Chris Gabehart was his crew chief in 2018 and whether or not NASCAR Cup Series racing is in his immediate future.

Michael Massie, Frontstretch: On the second-to-last restart on Saturday, everyone missed Turn 1 but you and Justin Allgaier. How did it feel being one of the only ones to make it?

Brandon Jones: The first thing that popped into my mind was Kansas flashback with everyone missing the corner there. It was really something kind of similar. I was just hoping, I didn’t know because I passed them so quickly. But I didn’t know if they had wrecked hard enough to throw a caution. I’m just sitting there thinking, ‘Man, if there’s no caution, I probably actually have a chance to go and win this race.’

Shout out to Brandon Jones and Justin Allgaier for actually making this corner. #nascar https://t.co/gQDHmJIDsk

Going back and watching it [the wreck] now, I saw how much it was. It was still fun to restart first and at least have a shot to compete for a win there. [Cindric] was just lights-out fast all day, and he’s got something figured out on road courses. It was good to see though that we had the speed all day and was able to maintain about a top-four lap time all day.

Massie: You haven’t had a ton of success at road courses, so how much of a relief was that?

Jones: Yeah, that was really big, because I think if you’re going to be really successful in this sport, you got to adapt to everything they throw at you. So we were getting really good at ovals, and that’s obviously what I started out on. And now, trying to work in your road courses, trying to get those good. That was big, and I know we’ve got the [Charlotte Motor Speedway] ROVAL left this year, so we’ve got another shot to try to improve once again. I’m sure we’re going to take something really similar setup-wise that we ran there this weekend and go to the ROVAL with too. It was a big relief and a big confidence booster on my road courses.

Massie: Now that you’re a multi-time NASCAR winner, have you been happier coming to the racetrack, or is it not any different?

Jones: Yeah, I would honestly say so. And it helps that this year, when we’ve had things go wrong, we’ve been running really good and really fast. So that’s been the positives that we’ve been taking away from the weekend. But in the past, man, there’s times where it seems like you can’t do anything right. I think you do eventually get into a slump naturally. That’s what makes some drivers better than others, if they can deal with that a little bit better. If you can try to put that aside and just try to go on, then they’re going to be pretty strong once the playoffs come, because you’re mentally ready for anything it throws at you.

It definitely is tough to come back from, but I think in the end, they say what doesn’t kill you makes you stronger, I think that’s definitely true.

Massie: What’s led to, this year and late last year, you being more of a weekly threat?

Jones: I think a lot of it’s been my restarts. I think I’ve really gotten better being aggressive on my restarts, and I feel like that’s where a lot of these races are won and lost is on these restarts. Because once we get going, once we get spread out, we’re all so equal that it becomes hard to pass. A lot of these tracks become single-groove tracks. There’s not many places we go to you can move around and pass somebody easily. Then it takes somebody messing up in front of you to pass them.

Our restarts have gotten a lot better. My pit road has gotten a lot better over the years, and I think that’s a section you can win and lose a lot of races. So those two things have really improved. I feel like, maybe our overall speed has gotten a little better too. In the past, I might’ve taken off really well in the race and then faded too much or vice versa. I didn’t take off very fast and then got better at the end. And I think we’ve done a great job at maintaining that falloff a little bit. All that stuff is leading to better finishes.

I’ve got Blake Koch, who used to race for Kaulig [Racing], helping me out some as well. He’s kind of more so looking through SMT data that we have now and going back and watching film, pointing some things out that I might’ve missed. Kind of a race-analytics guy for me, so that’s been pretty big.

Massie: On the flip side, what’s the talk been like in the Toyota camp with these two Ford drivers, Austin Cindric and Chase Briscoe, winning so much this year?

Jones: They’ve got some speed. There’s no doubt about it. I’ve watched Christopher Bell win [eight] races and then go to the championship and not win that, so I think you can win a lot of these races and then get to the final round and still not close out the year with a championship. I’m being optimistic in that area that we can get to the final round. And if we do, we’ve got Kansas and we’ve got Phoenix, which we’ve both won at this year. So I think we’re going to be a big threat if we get to that last round.

Massie: You and Jeff Meendering are doing pretty well together. But before that, Chris Gabehart weren’t able to win together. But apart, you’re both doing great. Is it frustrating that you two couldn’t take advantage of that combination?

Jones: Yeah, I mean I like Gabehart a lot. I think he’s an extremely sharp guy, a whole different style from what Jeff Meendering offers. But both are good, both are very fun. I think that me and Jeff have a really good personal relationship outside of work. We all hang out on weekends sometimes together and do team activities, things like that.

I think the timing was a little wrong for me and Gabehart, me coming in, not a ton of confidence, hadn’t won a race in the Xfinity Series yet. And honestly, I learned a lot from him. He was very hands-on trying to help me get better and help me improve through my career there. It would’ve been fun to get one. We were close a couple times. We had a pole together, we had some really close finishes to try to get first. It wasn’t a really unsuccessful year, I just would’ve enjoyed to be able to [win]. I can say the same for a lot of the crew chiefs that I’ve had in the past, that I would’ve like to have had a win with them.

Massie: You’ve got three wins across two NASCAR national series this year. Do you think you’ve proven you have what it takes to compete in the Cup Series?

Jones: I don’t know yet, man. I think you’ve got to win a bunch in this series to get to that next level. Because when you make the switch, it’s going to be very, very tough. I think that it’s going to be a very humbling experience going from Xfinity to Cup.

I don’t know if I would be ready 100% to make that call. But hopefully, I can get the chance to continue to run in Xfinity for a few more years, and at that point, make an assessment. And if we’re a threat every week to win these races, then you eventually say, yeah, you’re probably ready to move to that next level.

Massie: So next year you say you’re more than happy to stay in Xfinity?

Jones: Yeah, for sure. It could change pretty quick. This year, you could win a bunch of races and win the championship, then you think probably differently. But right now, I’m thinking continue just to win these races and keep getting used to these tracks and keep getting aggressive in the spots you need to. That way, you’re more prepared when you get there.

Massie: Have any Cup teams talked to you, even preliminary discussions?

Jones: No, not at all. I know there’s big rumors out right now with me switching over to do one of those deals. But no, we haven’t had any talk at all about doing that. I’ve actually talked and said I don’t think that that would be the time to be doing it or be ready yet for next year. Yeah, not at all. Kind of funny how this is the time of year those things start happening and coming out.

Massie: That’s a pretty humble statement, saying you aren’t ready and need to win more. How does a driver be that humble?

Jones: I’ve just watched too many guys from Xfinity and Trucks go out and win some races and the think, ‘Okay, I’m ready to go to Cup racing,’ all of a sudden. And they jump to a car that they might not have been ready for or, heck, this is just a whole other level of hard. And then it’s almost like a career killer. All of a sudden, you don’t hear about them forever.

And at that point, who’s going to put their brand on that car? It just starts coming down to those little things. I want to make sure that I’m definitely staying competitive. I’m definitely keeping my name out there. I think that’s what’s going to build your brand. That’s what’s going to get people interested in sponsoring and continuing to invest in you to keep doing this. So all that stuff is what you’ve got to take into consideration before making that jump, because some of these things do sound really good, but at the end of the day, what’s the future hold. So you kind of got to think in advance on that if you’re going to make a career out of this.