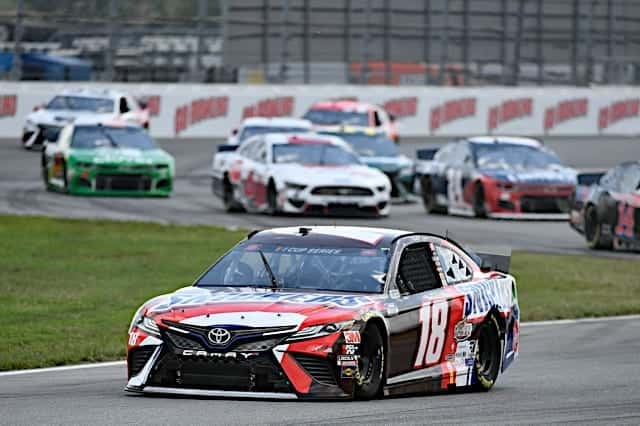 Another weekend and another unprecedented event in NASCAR. This season, it seems that NASCAR is doing something new every week, and this past weekend at Daytona International Speedway was no different.

Never in the history of NASCAR have any of its top three divisions raced on Daytona’s road course layout. This past weekend, it happened, and it went on without a major hitch. All three series ran the layout without practice or qualifying and put on an entertaining show.

That’s good news for NASCAR since the track will be featured in the Busch Clash in 2021. Since the event started back in 1979, it has run on the standard 2.5 mile oval at Daytona. That is scheduled to change as the Cup drivers will make the left and right turns on the road course in February 2021. That may not be the end for the road course either.

On Monday, it was reported that NASCAR’s Vice President of Competition Scott Miller gave the weekend an A grade and said that the sanctioning body is considering adding the track to the regular-season schedule in the future. It’s an interesting development considering NASCAR has recently added Charlotte Motor Speedway’s ROVAL onto its schedule. Is there enough room on the NASCAR schedule for the Daytona Road Course? Our writers Adam Cheek and Mark Kristl give their takes on the situation as they debate the topic in this week’s 2-Headed Monster.

Subpar Racing + Too Many Race Tracks = No

Although it was the inaugural NASCAR race weekend at the Daytona road course, there were no surprise winners in any of the races, including the ARCA Menards Series. For all its hype, all four winners had previously won this year. We shouldn’t consider racing on another road course without more short tracks on the schedule.

Yes, there were exciting moments, such as the final restart in the NASCAR Gander RV & Outdoors Truck Series race, but overall, I disagree with Scott Miller’s grade of the race weekend.

Frankly, I would give the race weekend a “B” grade. To improve the racing on this course, I would make a few changes.

First, I would eliminate the chicane on the frontstretch ahead of the finish line. It was intended to slow drivers before they entered the infield portion of the course, which is antithetical to what makes Daytona so exciting. NASCAR needs to treat its drivers like professionals; they will learn how to control their race cars to best make the first turn. If NASCAR eliminated that chicane, drivers could align themselves in a draft to catch the drivers ahead.

Next, I would alter the penalties if a driver drove through a chicane. If a driver simply never turned into the chicane, NASCAR should penalize a driver with a pass-through penalty rather than simply stopping on track, which would be much easier to enforce rather than merely stopping; it could create some pit strategy, thus more storylines; and drivers truly would suffer from driving through a chicane.

Unless NASCAR made those changes to the course layout, I do not think the on-track product is worthy of being on the Cup Series schedule.

So, should NASCAR add the Daytona Road Course to the Cup Series schedule? No!

In addition to those four tracks, SRX plans on competing at short tracks Five Flags Speedway, New Smyrna Speedway and Stafford Motor Speedway. If those tracks are deemed worthy by NASCAR Hall of Famer and Cup Series owner Tony Stewart, then those tracks could also conceivably host a Cup Series race.

There are other tracks as well such as Evergreen Speedway, South Boston Speedway, and Toledo Speedway.

With the five-year track contracts expiring, NASCAR has freedom with the schedule, and it could help tracks make necessary upgrades to comply with Cup Series standards.

The Xfinity Series should race on the Daytona road course instead of its second race on the oval. The oval traditionally produces “The Big One,” a large multi-car wreck. It can be a costly race weekend for team owners, especially those underfunded teams. One less superspeedway race could save teams money. It also would add excitement to the race weekend akin to this year when the Xfinity Series raced on the Indy road course followed by the Cup Series on the oval.

Furthermore, while the Xfinity Series and Cup Series would be at the same location, ideal for TV partners, it would not be a complete companion weekend, beneficial for all.

The Daytona road course was a welcome sight when NASCAR announced it would be unable to compete at Sonoma and Watkins Glen. However, if NASCAR adds that race track to the Cup Series next year, it creates an imbalance in its schedule when compared to short tracks. – Mark Kristl

Yes, keeping the Daytona road course on the schedule is a good idea – but it’s a conditional yes.

The inaugural NASCAR weekend at the track was relatively uneventful, but in a year as weird as 2020 I would expect future races there to bring more excitement. It was also something different to add to the schedule, but there are some guidelines NASCAR should follow if it becomes a permanent fixture on the seasonal slate.

The schedule is 36 races long, and changing it up throughout would be a good move. Removing one of the sometimes very long, tedious races (sometimes snoozefests) at Pocono, Michigan or Texas would be my picks – Las Vegas, Kansas and Dover also come to mind as tracks whose product is very hit-or-miss depending on the race or year.

I wouldn’t mind dropping one race each at the former three for some road course action – heck, replacing Texas with COTA wouldn’t be too big a change, with the latter just three hours or so south of the oval.

Six races are at short tracks (two each at Martinsville, Bristol and Richmond), so those shouldn’t be touched, and the four superspeedway races shouldn’t be either. Maybe even throw the Daytona road race in the playoffs.

Yes, the Daytona addition would mean the number of different road-course tracks would outnumber the unique short tracks, but Iowa Speedway would balance that out nicely (the Xfinity and Gander RV & Outdoors Truck Series already race there, anyway). Plus, even if Iowa isn’t tacked onto the schedule, short tracks still host six races compared to four at road courses. Personally, six at each would be fine with me – two at each of the three short tracks, six at six different road courses.

Turning right is something the NASCAR schedule needs more of, even if it’s ROVAL-style tracks like Charlotte and Daytona. I much prefer adding true road courses like Sonoma or Watkins Glen, but the ROVAL layout adds another challenge. The backstretch chicanes are always tricky for some, and there are different strategies with the oval track still partially in play.

Variety is what continues to keep NASCAR alive – whether it’s the mixture of rookie drivers and elder statesmen, vibrant paint schemes week in and week out or simply diversifying the schedule.

Now we get to the conditional part. If this move is made, NASCAR should not remove Daytona’s second oval race from the schedule. A track having three Cup races in a season certainly isn’t something we’re used to, but the dual superspeedway events at Daytona and Talladega each season are a staple that shouldn’t be messed with.

If that’s the case, I’d prefer NASCAR look elsewhere – Road America, Mid-Ohio, Road Atlanta, etc. – to add road course races. However, I’d thoroughly support the addition of the Daytona road course race to the schedule as a third Cup event at the Florida track and some more variance in the overall schedule. – Adam Cheek

Nope. There are plenty of legitimate road courses that they could run. The Daytona road course was better than no road course at all given the pandemic restrictions but it wasn’t that great.

The races last weekend at the Daytona Roval just plain sucked, but Hey… I can not watch them just as easily as I don’t watch the Brickyard, Chicago, etc.

Let me see. Lowest rated race at Daytona in how many years? It was so bad I couldn’t watch it. NASCAR is dying right before your eyes trying to be WOKE. The answer to the Daytona “road course” is a resounding NO.

NO and get rid of the Charlotte road course too. NA$CAR will try an endless number of gimmicks and none will work.

Best racing I’ve seen in my 60 years of attending NASCAR races has always been at that 1 mile track in the Sandhills of N.C., ROCKINGHAM!!!

Nascar just do what ever it is you want!

Better than the wreck-fest of restrictor plate racing or tapered spacers at the Daytona oval. I’d get rid of one Dega race or one Daytona race and not miss it a bit. Those are only for fans who enjoy watching wrecks.

IMO, add a few more short tracks, add a few more road course be they Daytona’s, make the schedule more diverse rather than the same ole same ole cookie cutter tracks. Put all the drivers’ skills on display and make it more interesting.

You neglected to mention Iowa in the possible short track additions. Definitely need to replace the overexposure of the cookie cutter 1 1/2 D shaped ovals. Most races at those tracks are great for nap times and not much else.

I suggest getting rid of all chicanes and bus stops. Drivers cut over the curbs and make it a straight run plus other chaos happens that’s not racing. The road courses have enough designed curves and turns without adding these gimmicks. Nothing better in racing than lots of speed.

I’m really sorry that each of you found the Daytona race boring. I was there with only 20,000 fans, and it was the best race I’ve been to since Earnhardt’s final win at Dega. First, we showed up ten minutes before the 1st race with no traffic and speedway free parking. Next, there were only about 20,000 fans in a frontstretch that seats 100,000 plus. Weather wise it was a beautiful overcast day. Racing wise there was action on every part of the track, stage and pit road strategy, drivers (48, 14, 3) that you’d never expected to be in the top 5 or 10, a first time starter leading laps, veterans (4, 18) looking like rookies, and an overtime finish featuring 40 drivers taking a hard left onto a flat turn that was 40-feet wide. Oh and the most popular driver dominated the action…

Good to know the race was a lot better than what NBC showed us! Their coverage really sucks.