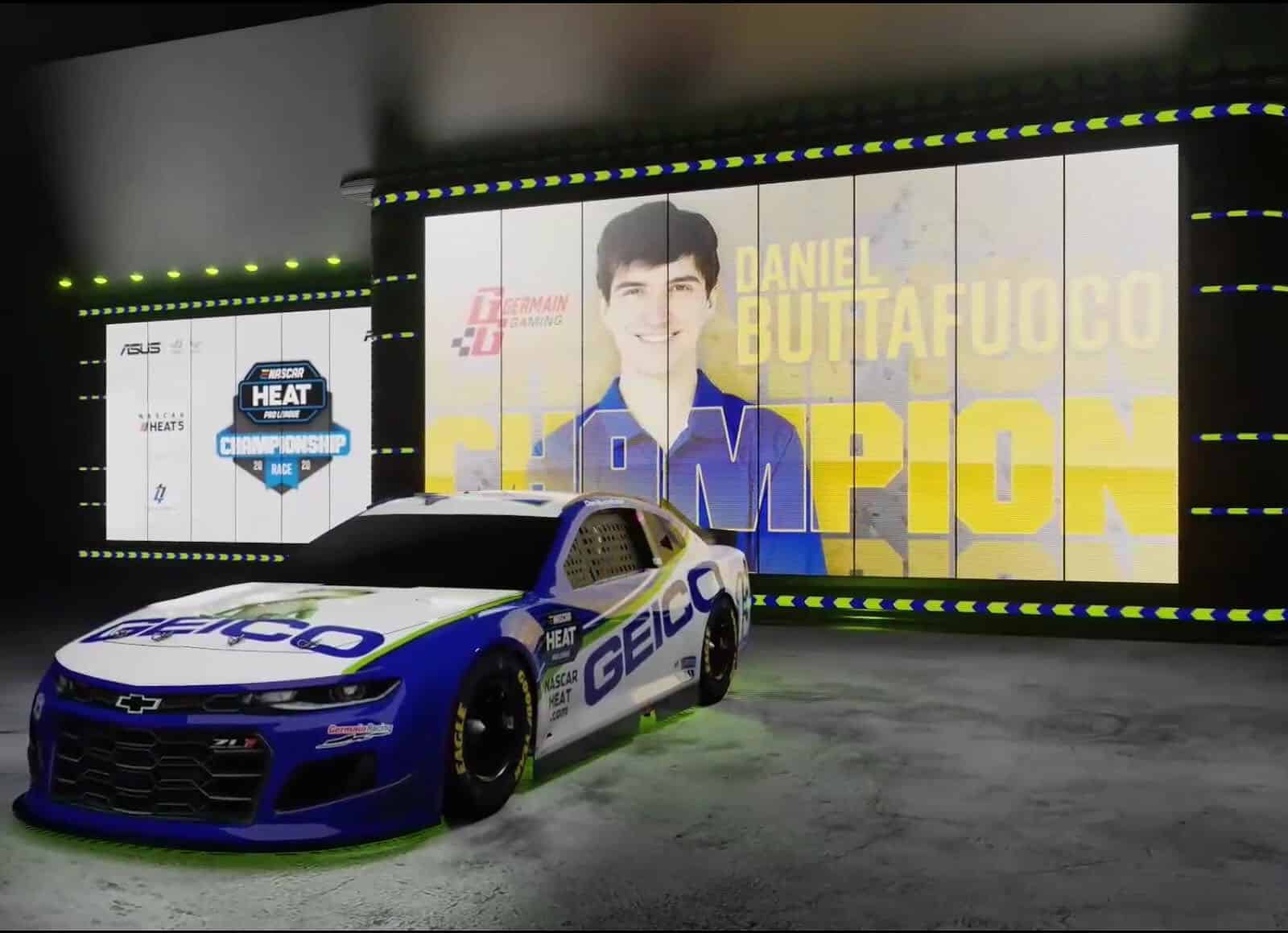 The final night of the 2020 eNASCAR Heat Pro League season was run on Wednesday, Aug. 19. And when the checkered flag fell, it was Daniel Buttafuoco celebrating the most.

In the last few laps, Germain Gaming’s Buttafuoco fought JTG Daugherty Throttlers’ Justin Brooks for the lead. Buttafuoco used his bumper but finally got past him to win the eNHPL championship.

In the end, though, it was Buttafuoco who used his bumper to take the lead and the championship.

“It’s an unreal feeling,” Buttafuoco said after the race. “I am just humbled and honored to be champion, to be racing for an incredible organization in Germain Racing, to have GEICO as my sponsor. A lot of emotion as you can see, I have worked very hard to get to this level. So many hours, a lot of hard work. There was so much stress leading up to these races. I put so much pressure on myself because I want to do well, I want to win, I want to be the best.

“We got so lucky at Michigan because we sped. I don’t know how, I made a mistake, and I was just praying, praying that I would get a caution. We did and that saved us, and we just kept being consistent at Phoenix.”

Despite winning the title, Buttafuoco admitted he was already rethinking the move that won him the hardware.

“I don’t think I should have done that move on Brooks,” Buttafuoco said. “I moved him, I was racing him rough. I really want to apologize to him. I think he would have done the same to me, but I apologize to him, I know he’s really mad about it, I hope we can talk it out. I had to go, I was the faster car. That was probably a bad move by me but hey, we raced each other clean all season, I have massive respect to him as a competitor.”

At Michigan, drivers had varying pit strategies that separated the field into groups. Brooks and Castro were the drafting duo in front and pitted together while the rest of the field tried to work together to get up to the front.

Buttafuoco had pit troubles early on, which put him near the back of the pack, well off of the leaders. As the laps wound down, it appeared Buttafuoco would make an early exit.

Then the caution came out. Brandin Hanna, Nick Jobes, Joe Gornick and several others spun and collided near the rear of the field.

Most of the lineup changed during this break, though Brooks stayed up near the front of the field. When the race restarted with four laps to go, Brooks passed Corey Rothgeb for the lead, but Luis Zaiter was hot on his tail. Then a major wreck occurred on the frontstretch near the back of the pack as the leaders took the white flag.

Big pileup in the back!

However, the race stayed green, and Zaiter got around Brooks to take his first win of the season.

Thanks to the caution, Buttafuoco was able to move on with Brooks, Castro, Brandyn Gritton, Slade Gravitt and Josh Harbin. Brian Tedeschi and Josh Parker were eliminated in this round.

Everything that Michigan was, Phoenix was the opposite. This race was riddled with cautions and fierce battles throughout the 45-lap event.

At the front, though, it was Brooks and Buttafuoco who led by a wide margin for much of the race.

Championship contender Castro used an alternate pit strategy than the leaders, which kept him behind. As each yellow flag flew, his chance to make the final four grew slim.

This left Harbin and Gravitt to battle for the final transfer spot, as Gritton had moved up into the top three positions. Gravitt tried to hold off Harbin for as long as he could, but was bumped out of the way just before the final caution. Gravitt couldn’t get back to Harbin’s bumper in the final few laps, and his quest for the championship came to an end.

Brooks, Gritton, Buttafuoco and Harbin became the final four to race for the championship at Bristol.

Like Phoenix, Bristol had quite the abundance of cautions, starting on lap 1. Michigan winner Luis Zaiter began out in front, clinging to the bottom groove. Unfortunately, the bottom was not where he needed to be, as Gritton, Buttafuoco and Brooks got around him.

After the fourth caution, Brooks moved up into second ahead of Buttafuoco. Then, with 32 laps to go, Brooks battled with Gritton and passed him for the lead.

The yellow flag waved again for another incident with 27 laps remaining, causing a pause in competition. Then on the restart, Gritton overdrove the corner and hit the wall, which allowed Buttafuoco and Harbin to sneak by.

The finale was winding down as the intensity heightened between Brooks and Buttafuoco. The Germain Gaming driver was all over Brooks’ back bumper for several laps and finally bumped Brooks with about three laps left. Buttafuoco and Brooks banged doors before Buttafuoco took the position.

Germain Gaming was unofficially on top of the team standings, and its driver Buttafuoco took the championship and $30,000 prize.