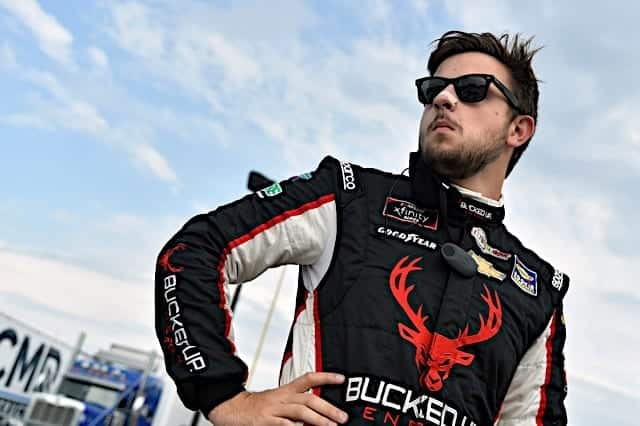 Driving racecars for a living is rewarding, but it’s certainly a challenge. Being enrolled full-time at a first-class university to learn the inner workings of business in sport on top of that makes life much more difficult.

Joe Graf Jr. is in the midst of his rookie season in the NASCAR Xfintiy Series, competing for SS Green Light Racing. Prior to moving to NASCAR’s top preliminary division, the New Jersey native spent nearly two full seasons in the ARCA Menards Series, winning once at Berlin Raceway for Chad Bryant Racing in 2018.

Growing up, Graf lived at the racetrack on weekends, watching his father (Joe Sr.) race. His family had a “love affair” of sorts with racing, piquing Graf’s interest, and ultimately led to the beginning of his career in bandoleros and quarter midgets.

Prior to ARCA, Graf won many races and championships at the local level. Fast forward to this season, he sits 22nd in the Xfinity championship standings, just 23 points outside the top 20.

Overall, it’s been a decent rookie season, Graf having scored seven top-20 finishes in 19 races with a best of 13th, three times.

“We’ve definitely had our ups and downs,” Graf recently told Frontstretch. “Overall, I’d say it’s going well. I’ve learned a ton and feel like we’re getting better each and every week. Unfortunately, we haven’t had some of the races go our way and got caught up in some other people’s wrecks, but even in those races we’ve had pretty good speed.”

In 2019, Graf got a feel for what Xfinity competition was like, making three starts for Richard Childress Racing. He did, however, fail to qualify for what was scheduled to be his first career start at Michigan International Speedway, while also DNQ’ing at Bristol Motor Speedway for Kaulig Racing.

In the process, Graf has yet to make a start in the Gander RV & Outdoors Truck Series, simply because his sponsors wanted to move up the ladder quickly, to get more exposure and more bang for their buck given Xfinity runs 11 more races than trucks. Because of that, the driver is relatively new to the national levels of NASCAR, and his goals change on a weekly basis.

“It certainly depends on the track, but our goal every week is just to learn and figure out everything we can and get as much experience as possible,” Graf said. “My personal goal is to always be passing cars. It doesn’t really matter where I’m running, my goal is just to pass the next car. Depending on the weekend, that goal keeps changing. If you’re running 15th, your goal is to pass the car for 14th. If you’re running 20th, your goal is pass the car for 19th.

“I don’t know that I have concrete goals going into every weekend other than getting the most we can out of it.”

All the while, Graf is also entering his junior year at New York University, majoring in Business, Media and Sports Management. Why NYU? Though having a few other schools he was strongly considering, he believes NYU has the best business, media and sports management program in the country.

In his first two years of college, Graf spent two of his first four semesters on campus while also attempting to win races in ARCA and starting his tenure in Xfinity. The goal with the degree is to use the knowledge to sell potential sponsors, as well as setting up a future for his post-racing career, whenever that comes.

“It’s actually turned out tremendous for me. Learning about the business side, marketing, what these companies are looking for, and a lot of my classes are actually based on how to pitch some of the sponsorship and things like that throughout the sports industry. It’s helped me a ton on getting new sponsors and maintaining the connections I have throughout the sport.”

One of Graf’s favorite classes was “Real World,” a class he took in the fall 2019 semester, taught by David Cooper, a sports PR and digital media expert. Cooper has worked around the sports industry for years, operating his own PR business and has worked with clients that include the NBA, NCAA, NFL Players Inc., among others.

In the Real World class, Cooper and the students bring in clients from outside the university and present the students with a marketing or business challenge. The students then break off into teams to take on the challenge and pitch ideas back to the client. In the end, the client chooses the winner, where that company will essentially implement those ideas into their respective business strategy.

Graf’s pitch was to Fox Sports, as last year the company signed on to be a broadcast partner of WWE beginning in October, airing Friday Night Smackdown. Come November, a studio show titled “WWE Backstage” would air every Tuesday night at 11 p.m. ET, which would promote the product as a whole with a panel.

“Joe was part of the group that came up with ideas to promote the show, promote the talent, sell sponsorship, market it to different audiences,” Cooper told Frontstretch. “It was a complex strategy, but it also allowed for a lot of creativity. Joe was a part of that group to present ideas to Fox executives.”

Graf admits that he tries to intertwine racing with school for projects, especially when it centers around sponsorship.

Cooper, who says Graf is a good communicator, extremely capable of handling complex projects and very team-oriented, can tell the driver puts an emphasis on tying his two passions together, incorporating racing into his assignments.

“A couple of his ideas – one related to bringing the WWE talent more to the forefront where fans could have more access, which is something that the drivers do and NASCAR does a really good job at,” Cooper stated. “Joe brought that to the [WWE] Backstage challenge; bring the wrestlers to the forefront, bring the talent to the forefront, whether they’re doing Q&A’s, different camera angles or different content on social, just a lot more interaction.

“I think Joe brought that perspective as a driver because he sees what works. He sees fan interaction is probably the number one driver for engagement is getting to know the drivers. So, if you get to know the wrestlers that would be a good thing for promoting your show.”

There have also been other situations where Graf incorporated his racing knowledge with school projects.

Graf said, “I had a class last semester which was a huge research intensive class. Basically, we had to write a 30-40 page research paper over the course of the semester, went through the whole process and everything of drafting and outlines. I wrote my research paper on sponsorship in motorsports. That was really exciting to learn about and dive into that for 15 weeks.

“I learned a ton and a lot of stuff I actually didn’t know.”

Balancing racing and college is a demanding challenge for Graf, noting NYU has been very sensitive to his schedule. Instead of going to class Monday through Friday when on campus, he would begin Monday morning at 8:30 a.m. and finish his day at 9 p.m. He would repeat that chaotic schedule through Wednesday allowing him to fly out on Wednesday night or first thing Thursday morning to get to the racetrack, if necessary.

Moving to the Xfintiy Series this season – where the schedule is much more dense – has really tested Graf.

“It is really difficult, and I didn’t have as big of a respect for how difficult it was until this year,” he added. “The good part with ARCA when I did it is, they have a really heavy summer schedule, but their spring and fall schedule isn’t that tense. When I went back to school – even when I was on campus – I would only have to fly to three ARCA races because we’d only have three of them after August. We’d have Daytona and then a two-month break when I ran ARCA. It wasn’t as crazy as it was this year.

“I was taking online classes to start [this] year and going to Daytona, then immediately to the west coast swing, it was tough managing my time and getting all that done.”

Because of his hectic schedule and willingness to learn the business side of sport while also participating, Cooper believes Graf is one of the most well-rounded students he’s ever had in his teaching career.

“What’s unique about Joe is he’s balancing a career as a driver and then also a student; most students will have an internship to balance,” Cooper continued. “Joe’s balancing a budding NASCAR career, which is pretty impressive, but it’s also very adventurous. He’s probably one of the students of all the students I’ve had that have the most unique outlook in terms of their future career.

“The fact that Joe wants to learn about the business of sport, marketing of it, really speaks to his investment in his own future… I don’t have many students like Joe, so I can geek out that I had a future NASCAR star and also someone who is in the business, too. He’s working with promoters and marketers, so it was interesting to have his perspective.”

Come the first week of September, the fall semester will begin at NYU with most academic classes being held online via Zoom. But that’s just another challenge Graf will need to adapt to.