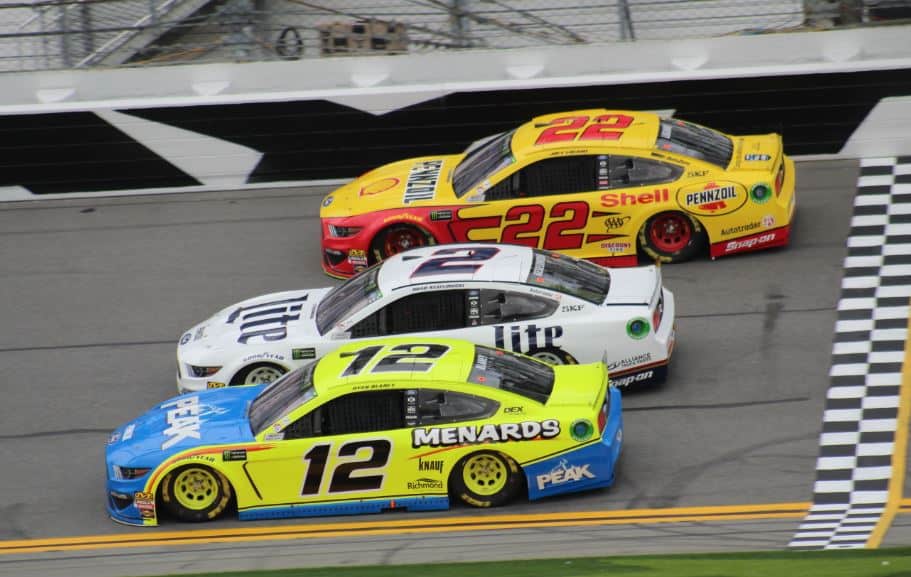 This week, San Diego Padres star Fernando Tatis Jr. swung on a 3-0 pitch while up seven runs and smashed a grand slam over the outfield wall. The game was out of hand, and there wasn’t really a need to add insult to injury.

But he did. Tatis saw a pitch to hit and capitalized on it. His actions were met with disdain from not only the opposing manager, but his own as well.

Baseball has about as many unwritten rules as any other sport out there. Being around for as long as it has, that shouldn’t be a surprise.

It’s the age old adage, but it still happens. We saw it just a couple weeks ago when Brad Keselowski got loose underneath Ryan Blaney at Michigan International Speedway’s NASCAR Cup Series race and wiped both of them out.

Was it intentional? Of course not. Did it suck for team owner Roger Penske (and the two drivers)? Of course it did.

That was a relatively innocuous mistake. But another that comes to mind is Lewis Hamilton and Nico Rosberg in 2016 at Formula 1’s Spanish Grand Prix. Hamilton was at fault, making a daring move onto the grass, losing control and coming back on track, out of control. So much so that as he was sliding to a stop, you can see him bury his hands in his helmet. He knew that one was avoidable.

Not to mention Brian Vickers turning Jimmie Johnson at Talladega Superspeedway in the Cup Series, Dale Earnhardt Jr. and Steve Park getting together at Pocono Raceway in Cup and Carl Edwards and Ricky Stenhouse Jr. coming to the finish line at Iowa Speedway in the Xfinity Series.

Those are just a couple recent examples. There are hundreds more that have occurred over the years — some intentional, some not.

Race Others How They Race You

Racing is a lot like life, isn’t it? You need a whole lot of determination to succeed, be happy and treat others how you’d like to be treated.

So if John Doe wrecks me for no reason on lap 189 of a 500-lap race at Martinsville Speedway, well, I’m going to be pissed about it. And I damn sure am not going to forget it. So next time he comes by me, I’ll wreck him back (or at least show my displeasure).

Since Ryan Newman is a kidney stone to get by on the track, drivers may make his life a bit more difficult if he’s trying to get by them. We’ve seen it play out every week with a multitude of different competitors for a number of different reasons.

Tony Stewart hates blocking, right? So odds are if he’s going to block you, you’d do what Smoke did the last time you tried to block him.

It goes both ways, whether it’s a block for the win, passing a lapped car in the early stages of a race or anywhere in between. Respect goes a long way.

To Finish First, You First Must Finish

My dad always feels the need to recite this one to me whenever somebody makes a dumb move early on, but it’s true. You can’t win it on the first lap, but you sure can lose it.

Most races are a marathon, not a sprint, especially ones on the Cup level. Give yourself a chance to adjust on it and capitalize on others mistakes instead of making yourself look like a fool in the first 20 seconds.

(It’s beyond fitting that John Wes Townley is the thumbnail image for this video compilation.)

Fight With Your Fists, Not Your Cars

I recently watched Days of Thunder with my girlfriend, who’s slowly but surely becoming more and more indoctrinated to NASCAR. And when Cole Trickle uttered the “CHANGE. MY. TIRES.” line so he could go back on track and wreck Russ Wheeler (which, by the way, goes back to the “don’t wreck your teammate” unwritten rule), she was a bit confused.

“Wait, does that actually happen?” Of course, I explained to her that Trickle was a hothead, Wheeler got under his skin and that it usually doesn’t happen. Besides, you know, the occasional time or two.

But even so, Edwards didn’t really damage Kyle Busch‘s car. Plus, I’m sure the fans at Bristol Motor Speedway couldn’t get enough. But team owners would rather give their driver a Band-Aid for a black eye or scratch than foot a bill for a brand new chassis or rear clip.

Connected to the prior point, cars shouldn’t be used as weapons. As Mater said in Cars, “(They’re) precision instruments of speed and aerodynamics.” Well, he didn’t really say it like that, but you get my point.

These things aren’t cheap, and the last thing a team owner wants is for their driver to make a plausibly bad situation worse by wrecking their car in the process. But sometimes, crew members get involved and wind up stealing the spotlight. See Joey Logano‘s crew member pulling down Denny Hamlin last year:

Or when Stewart vowed to Steve Byrnes that he was going to “bust his ass” in reference to Logano at Auto Club Speedway, but didn’t get the chance to before crew members intervened.

Look, I get it. You’re a team and you’re going to do everything you can do defend your driver. That’s your guy. But some part of me wishes there was a rule that prohibited crew members from getting super into a driver-on-driver fight.

And yes, I know there are some rules, one that Dave Nichols Jr. violated last year due to “member-to-member confrontation with physical violence,” but I just want to see the drivers throw down themselves. Is that too much to ask?

Problem is sometimes that ends up in, well, whatever this was.

(Sorry for picking on you again, Townley. I hear your family’s chicken isn’t half bad, though,)

If Somebody’s Faster Than You Early On, Let Them Go

I’ll admit, I never fully understood this one until I became somewhat of a legitimate human being and realized that I, in fact, didn’t know everything.

I vividly remember sitting in the grandstands at Dover International Speedway in the early or mid-2000s seeing Mark Martin let drivers go by, one by one, for an entire green flag run. My dad explained to me that he was being a gentleman, showing respect to his competitors and letting them come through and not damage his chances of a good finish in the process by holding on for dear life.

But my little brain couldn’t process it. “It’s a RACE. You’re supposed to go go go all the time. He’s doing the opposite of that.”

Well, I’d say Martin did pretty well for himself, all things considered. His Hall of Fame jacket and plaque tell me all I need to know.

Take a L in the short term, whether that be stage points, position for green flag pit stops, etc. for the possibility of a W in the long term, be it that afternoon in victory lane, that same driver letting you go when you need to get through, etc.

If You’re Lapped Traffic, Get Out of the Way

I’ll stop with the JWT slander for a hot second and being attention to Door Bumper Clear’s favorite backmarker, Quin Houff.

I did genuinely feel bad for the dude after all the hate he was getting for this gaffe at Texas Motor Speedway. But like, bro, just stay out of the way.

Corey LaJoie always talks about “the race within the race” for teams about 25th on back. Joe Gibbs Racing, Team Penske, Stewart-Haas Racing, those teams enter every race with a goal to win, and if they don’t, it’s a disappointment.

But Go FAS Racing, Leavine Family Racing, Richard Petty Motorsports, StarCom Racing, etc. have a whole different agenda. 20th is a good day for them, 15th is a win. That’s why for the most part, we see those drivers who know they’re going to be lapped multiple times just move over. It’s part of the deal. Sucks, but it is what it is.

Kudos to Houff, though, who has been better in recent weeks and notably got out of the way as leaders Chase Elliott and Hamlin came through on the final lap at the Daytona International Speedway road course.

This has been a recent trend, and it was evident at the end of stage two this past weekend.

See at the 41-second mark of this video as Hamlin lets by James Davison to get a lap back. Inconsequential? Sure. Nice gesture? Absolutely. But why?

New road course circuit, but the same face in Victory Lane 9️⃣@chaseelliott (Mr. Road Course ?) got 'er done @DISupdates for his 3rd straight RC win. Plus, when will @KyleBusch's terrible year turn around? Or will it?

Highlight Hump Day™ served up with some twists & turns ? pic.twitter.com/RTFLOlBeyc

Kevin Harvick has routinely done the same this season, and it’s for one main reason: you never know when and where you’ll need a little help and from whom you’ll be asking for said help.

I’m sure Davison isn’t going to be racing anywhere around Hamlin in the playoffs, but if he is, that simple gesture could make all the difference.

At the End of the Race, It’s Every Driver for Himself

When it comes down to it, be it on a green-white-checkered, restart with five to go or whatever, all those aforementioned rules can be thrown out the window (or at least most of them).

We’ve seen the championship come down to a late-race restart, and multiple cars from the same team have been competing against each other (see: JGR having three of the Championship 4 last year).

I’d bet a lump sum of money (that I don’t have) that Joe Gibbs didn’t want some of his cars to come to blows, but I also think he would have completely understood if there was some bumping and scratching en route to the checkered flag.

Fortunately for him, there wasn’t. But there have been plenty of instances where everything goes out the window when it comes down to it.

It is criminal to intentionally wreck another driver. We all can see that it wasn’t ‘just racing.’
I say let the physical fighting begin after the checkered flag. It’s a lot safer than crashing at 200 mph. If you were in the wrong and don’t want to defend yourself from the victim, then run away and maybe fight another day.

In the 1997 Daytona 500, Mark Martin gave Jeff Gordon his lap back under caution. Predictably (to everyone but Martin), Gordon went on to the win the race. It’s one thing to give a lap back to James Davison, quite another to the give one to Jeff Gordon. That’s probably one of the reason Martin never won a championship – or a Daytona 500.