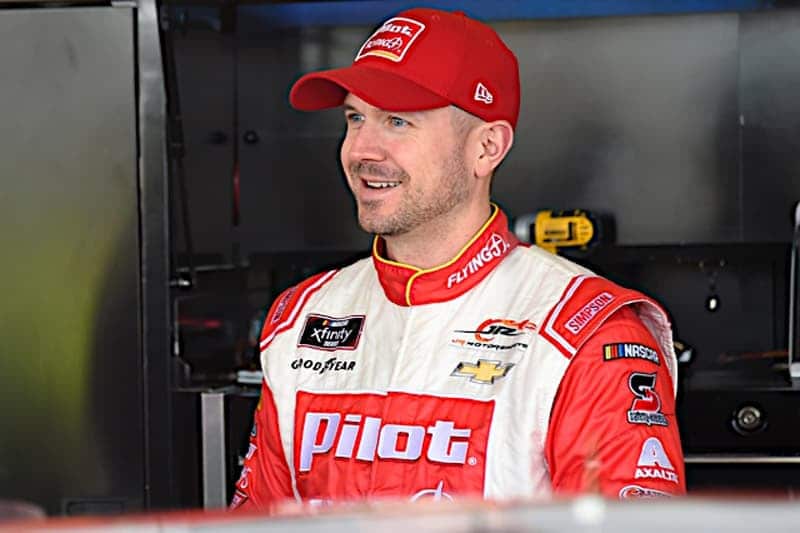 After nearly three years away from the NASCAR Xfinity Series, Korbin Forrister returns to the circuit in this weekend’s Dover International Speedway doubleheader, driving the No. 36 for DGM Racing.

Forrister, a mostly part-time competitor in the Gander RV & Outdoors Truck Series since 2014 (including seven starts in 2020), is no stranger to Xfinity. In 2015, he drove two races for SS-Greenlight Racing and Rick Ware Racing, with a pair of finishes just outside the top 30, followed by two more starts for SSGR in 2017, both finishes again just short of the top 30.

Prior to Dover, Forrister was one of two dozen drivers competing in one of NASCAR’s national series who’ve raced in a higher division in years past than they are right now. Some are former full-timers living out the later part of their careers on a smaller stage, others those whose demotions from prime rides find them a step backward, and more still those who might have simply made a one-off appearance or two on an upper circuit.

Here are those who still fit this bill in 2020 with Forrister’s departure.

Michael Annett: JR Motorsports full-timer Annett raced three complete seasons in Cup between 2014 and 2016, with a best points finish of 33rd in his rookie season. After 2016, he moved to JRM in Xfinity, where he’s remained since.

Sheldon Creed: A two-time winner in the Truck Series this year, Creed has three Xfinity starts to his name as well. He first drove a pair of road courses for JD Motorsports with Gary Keller in 2017, and in 2019, he competed in a one-off at Daytona International Speedway for JRM.

Jordan Anderson: The Truck driver-owner also has seven Xfinity starts, though none since 2017. His best finish came in what’s to date his final Xfinity start, finishing 26th at Dover for BJ McLeod Motorsports.

Jesse Little: Before Gaunt Brothers Racing signed Daniel Suarez as its full-time driver in Cup, it would occasionally field the No. 96 for a variety of competitors throughout the year, such as Little, who drove one event for the team at Bristol Motor Speedway in 2018. He also made his series debut earlier that year for Premium Motorsports at Kentucky Speedway.

Norm Benning: Longtime NASCAR and ARCA Menards Series journeyman Benning has 222 Truck starts, but the 68-year-old has also made intermittent appearances in the Cup and Xfinity series. He has four starts in the former, the last coming in 1993 (though he often attempted races as late as 2010), and also started three Xfinity races in 2003 and 2004.

Daniel Hemric: 2019 Cup rookie of the year contender Hemric has taken a step back into a part-time Xfinity ride in 2020 for JRM.

Jeb Burton: The second member of the No. 8 JRM squad in 2020 has 33 Cup starts since 2015, most of them coming that first year, when he contested the schedule for BK Racing.

Dale Earnhardt Jr.: Look, he counts. The No. 8’s other driver tends to drive a race a year these days, last running a Cup race in 2017.

Joe Nemechek: Despite Nemechek’s continued longevity in the sport, he hasn’t yet driven in a Cup race in 2020, even with a whopping 674 starts there between 1993 and 2019.

Mike Skeen: The road course ringer, who competed for Nemco Motorsports at the Daytona road course, also drove an Xfinity race for JDM at Watkins Glen International in 2018.

Jennifer Jo Cobb: A stalwart in the Truck Series for over a decade now, Cobb occasionally moonlights in Xfinity, with 31 starts there since 2004 — though none since 2018.

Johnny Sauter: Sauter is the most recent example of a former Cup prospect who’s now a Truck veteran. He’s got 85 starts in the uppermost series between 2003 and 2015, plus 207 entries — and three wins — in Xfinity, his most recent appearances coming in 2018.

Jeffrey Earnhardt: The fourth-generation Earnhardt has made 15 Xfinity starts this year, but he’s also got 76 Cup races to his name, and no Cup start in 2020 would snap his streak of at least one race there every year since 2015.

AJ Allmendinger: Since retiring from full-time Cup competition after the 2018 season, Allmendinger has remained partially active in Xfinity, nabbing two wins while driving part time for Kaulig Racing. Occasionally there are rumors he could pop back up on the Cup side with Kaulig, such as this year at the Daytona road course, which ultimately didn’t come to fruition.

Spencer Boyd: Boyd, the driver of Young’s Motorsports’ No. 20 in the Truck Series, has 41 Xfinity starts, including a full-time run in 2018, plus three Cup appearances, all coming last year.

Josh Reaume: Now an owner in the Truck Series, Reaume has also driven on the Xfinity level, though just once since the beginning of the 2017 season.

Dexter Bean: In 2009, Dexter Bean’s family owned the Cup No. 51, which made an ill-fated attempt at the series, qualifying for just one race. Bean himself drove that race, finishing 36th at Pocono Raceway. He hasn’t been in a Cup race since.

Jeff Green: The 2000 Xfinity champion, who still competes in the series part time, was briefly considered a Cup up-and-comer, making 270 series starts between 1994 and 2015.

Ryan Sieg: Though he mostly drives for his family-owned team in Xfinity, Sieg has also made six Cup starts, most recently with Premium in 2019.

Ryan Truex: The younger Truex drives part time in the Truck Series now, following a 78-race stint in Xfinity and 26 Cup races, neither of which he’s returned to yet in 2020.

Travis Pastrana: When Pastrana returns to NASCAR these days, it’s generally on the Truck level. But in the early 2010s, he also drove in Xfinity, including a full season in 2013, finishing 14th in points.

Ty Majeski: Full-time Truck driver Majeski was part of the ill-fated Roush Fenway Racing Xfinity team of 2018 that seemed to have some sort of issue weekly between its two drivers, Majeski and Chase Briscoe. Majeski scored two top 10s that year, but he hasn’t returned to the series since.

Kyle Weatherman: Though none have occurred yet in 2020, Weatherman will occasionally make starts in Cup, doing so for RWR and StarCom Racing since 2017.

Roger Reuse: More of a Truck competitor in recent years, Reuse also made four Xfinity starts between 2014 and 2016. His brother, Bobby, raced in Xfinity last weekend for MBM.

Alex Tagliani: For the last four years, Tagliani has driven a race a year in the Truck Series. Before then, he was more commonplace in Xfinity, where he boasted eight starts between 2009 and 2016.

Stephen Leicht: Mostly racing in the Xfinity Series over his 15-year NASCAR career, Leicht also drove 18 Cup races between 2006 and 2017, most recently for BK at Pocono in 2017.

Clay Greenfield: Greenfield has a single Xfinity start (plus an additional attempt) to his name, a 2011 race in which he start-and-parked for RWR at Atlanta Motor Speedway.

Parker Kligerman: NBC’s Kligerman, who still moonlights in the Truck Series on occasion, also has 81 combined starts in the Cup and Xfinity series, 14 of those Cup races for GBR last year.

Matt Crafton: Crafton’s isn’t precisely a Truck lifer, despite what it may feel like. He’s made two Cup starts in the latter half of the 2010s, plus four Xfinity appearances in the first half of that decade.

Landon Cassill: Usually more of a fixture in NASCAR’s Cup and Xfinity series, Cassill has made a handful of starts in the latter this year for Morgan Shepherd, but funding issues has mostly kept the team off the track in recent months. Should he not appear in a Cup race this year, it would be his first year without a start there since he started running in the series in 2010.

Todd Peck: Peck, who’s mostly driven for his family team in the Truck Series, has also competed in 13 Xfinity events over the years, including 11 in 2016.

Ben Rhodes: In addition to his five full-time Truck Series seasons and one part-time jaunt, Rhodes also ran a 10-race schedule for JRM in Xfinity in 2015, scoring two top 10s.

Mike Wallace: The veteran Wallace brother has made a comeback in Xfinity this year, driving three road courses for JDM. Of course, his Cup career was fairly extensive, with 197 starts over two-and-a-half decades, the most recent coming in 2015.

Angela Ruch: Ruch has moved more recently to being a Truck competitor, but she also has made 14 Xfinity starts since 2011, the last coming in 2018.

Andy Lally: Lally mostly pops up on Xfinity road courses these days, with a brief Cup career before that, including a 2011 Rookie of the Year title. He hasn’t returned to the series since.

Ray Black Jr.: A total of 103 Xfinity starts have been racked up by Black over the years, plus 31 Truck races and also four Cup events, the most recent in 2018.

Honorable mention: Mike Harmon has never made a Cup start, but he failed to qualify for a pair of events in 2002 and 2003. Same with Grant Enfinger, who attempted one Cup event at Homestead-Miami Speedway in 2011.