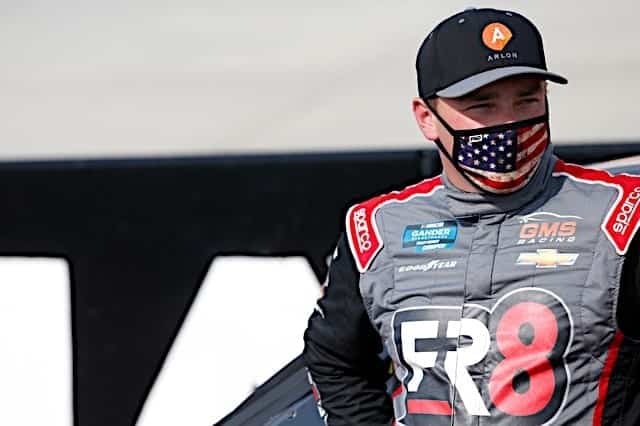 For Brett Moffitt standards, he’s had a challenging 2020 NASCAR Gander RV & Outdoors Truck Series season, as he’s still looking to get into victory lane. That drought continued on Friday (Aug. 21) in the KDI Office Technology 200 at Dover International Speedway.

Moffitt, who started the race from pole position, led the opening 25 laps of the race. He lost the lead when Matt Crafton and Austin Hill got by, as the No. 23 Chevrolet had a bad restart. Come the end of the first stage, Moffitt dropped to fifth, behind two GMS Racing teammates.

In the second stage, Moffitt raced around the top five, placing fifth again. But the final stage is where the No. 23 truck shined, chasing down Christian Eckes and Zane Smith in lapped traffic and ultimately taking the lead for another 25 laps.

With a late caution, Moffitt restarted on the inside line below Smith, ultimately dropping to third at the checkered flag. Overall, it was a frustrating day for the Iowa native.

“It fired off, and we weren’t very good, just fighting a lot of things; loose, tight, out of the racetrack,” Moffitt said on a post-race Zoom call. “Proud of the effort to get the truck better as the race went on, but I’m definitely frustrated, because we seem to only have speed to be able to make our way up into the top three.

“I did a better job than the [Nos.] 18 and 21 in lapped traffic and got the lead. We just don’t have the speed in our truck. Frustrating race.”

For the second straight season, lapped traffic played a role in the race at Dover. After all, it is a one-mile concrete track with nowhere to hide. With 35 trucks on the track, there’s little room for error for the slower trucks.

While Moffitt thought it cost him a win at Dover last season to Johnny Sauter, it helped him on Friday. But still, he believes NASCAR needs to step up its qualifications for a license to race at a national level.

“Today, it almost got me a win, it got me to the lead anyway,” Moffitt said of lapped traffic. “It’s extremely tough. Like [Brad] Keselowski was saying, I don’t know what it takes to get qualified to run in this field, but I think they seriously need to look into it. Because there’s guys out there that don’t know if they’re going to go bottom, middle, top. And it’s not whether I know or not, but they literally enter the corner not knowing what their truck is going to do.

“It’s dangerous at times, not only for the sake of us keeping our trucks in one piece, but just for the safety of wrecks. It’s going to cause a big one one day. It’s already cost me multiple race wins over the years, and it’s frustrating. I don’t see timing and scoring, but I have a hard time believing that a lot of those trucks are meeting minimum speed regularly.”

Overall, Dover marked the third straight win for GMS Racing, with Smith winning Friday and two weeks ago at Michigan International Speedway and Sheldon Creed scoring a victory on the Daytona International road course. Moffitt, who has jumped to third in points, is happy for his teammates’ success but disappointed he’s yet to score a win after visiting the winner’s circle four times last year, his first season with GMS.

U must remember that u were lapped traffic at one time yourself. Quit bitching.