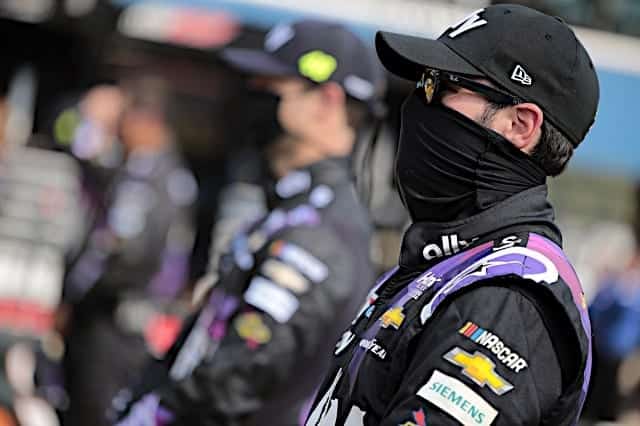 The NASCAR Cup Series heads up north to the Monster Mile for a full weekend of racing, giving you double the chances to win big bucks in your NASCAR DraftKings contests.

Both Drydene 311 events at Dover International Speedway on Saturday and Sunday, Aug. 22-23, will air at at 4 p.m. ET on NBC Sports Network.

Dover is a pretty unique track with 24-degree banking in the turns. Though its track length and banking set it apart from the rest, you could best compare it with the half-mile oval at Bristol Motor Speedway.

Although Miles the Monster has been known to wreak havoc, the last Dover event had just one caution aside from stage breaks, coming out for debris on the racetrack. Cars will again run the low-downforce, high-horsepower package, but there’s a new, smaller spoiler that’s led to increased competition this year on short tracks. It will be interesting to see how it affects the action as competition been subpar at times here the past few years.

What else should you know for daily fantasy? For one, you’ll probably want some drivers who will lead laps; in the past three years, at least one has led over 100 laps at Dover. Some even led over 200 laps! There’s only 311 laps in each event this weekend, but you can still choose a dominator for your roster. This rings especially true for Saturday, as the top 20 finishers will invert to form Sunday’s starting lineup.

Also, make note of which competitors can gain the most positions on the track, as position differential points will boost your DraftKings score. Sometimes, picking a driver at the back can be beneficial if he can race up to a top-10 finish.

Before I share my DraftKings picks, let’s review what happened last week at the Daytona International Speedway road course.

Chase Elliott held on to win his third road course race in a row, while Martin Truex Jr. claimed his fifth-straight third place in 2020. Unfortunately, Brendan Gaughan encountered mechanical trouble, which relegated him back to last.

Still, the lineup won $2 in the $1 Happy Hour tournament and cashed the $1 single-entry double-up.

Truex has had some very good results at Dover in the past six years. He’s nabbed two golden monsters in the last 12 events and only had two finishes outside the top 10 in that same span, with none further back than 15th. Truex has led an astounding 665 laps in those 12 races, including 132 from last spring’s victory. These stats alone should be enough to place him in your DraftKings lineup.

But if that’s not enough, Truex is also doing well this season. The No. 19 Joe Gibbs Racing pilot has five consecutive third-place finishes, and there’s nothing more reassuring for fantasy purposes than consistency. In each of those five events, Truex recorded at least 51 DraftKings points, which is good for this salary. Additionally, at Martinsville Speedway in June, he led 132 laps and tacked on 58 quickest laps, increasing his DraftKings score to 112. Truex should lead several laps in this race and possibly take his fourth Dover win.

“Hey, this looks familiar,” you may be thinking, and you’re right. Both Elliott and Truex are in my lineup again, and that’s no fluke. Elliott has done very well at Dover so far, though he’s not as dominant as on road courses. He won there in October 2018 and has landed outside the top five just twice. Additionally, Elliott led 145 laps last spring and 138 laps in October 2017. Unfortunately, his last race there ended quickly after his engine expired. Let’s hope that’s just an outlier.

The No. 9 Hendrick Motorsports driver has also performed well in the past few races. He has four straight top 10s, including his victory last week at the DIS road course. And don’t forget about his All-Star Race victory; Elliott notched 50 fastest laps and led 60 to score 98 DraftKings points. He also earned a runner-up at Homestead-Miami Speedway, scoring 65.8 DraftKings points. Elliott will sail off first Saturday, so look for him to try to hold off his peers and lead some laps.

Note: if you wish, you may consider Kyle Busch, who starts 22nd Saturday. He’s had the speed but also had many undesirable results so far this year. However, the starting position gives him a chance to pass slower cars in front of him, which would give you extra DraftKings points.

Speaking of dominators, Johnson is certainly one of them at the Monster Mile. The seven-time champ has more wins, top fives, top 10s and laps led than any other Cup competitor. No one even comes close to his 11 victories, and he’s led 3,110 total circuits throughout his career. In fact, Johnson’s last Cup win came at this very track, though it’s been three years.

Why else would I still consider Johnson for my lineup? Elliott’s Hendrick Motorsports teammate proved last year he could still contend in the top 10 there with an eighth-place result. Also, Johnson’s had some strong results this year as a whole: he was fourth last week at Daytona’s road course, seventh at Atlanta Motor Speedway in June and third at Bristol. He qualified sixth, which does make him a bit of a risky play; an early crash, for example, would give him a negative score. Still, Johnson has done a fairly good job of avoiding trouble and should continue that this week.

2020 has been full of surprises, so we could very well see Johnson sneak a win out of this doubleheader.

This weekend marks Bell’s first Cup starts at Dover, but he is very familiar with the track. He’s earned two wins in the NASCAR Xfinity Series there and added a fourth place in spring 2018. In October of that same year, Bell led 110 laps en route to victory and led 44 laps in the very next NXS race at the oval.

However, Bell’s driving for Leavine Family Racing, an underfunded team that has been sold to Spire Motorsports. LFR will continue through the rest of this season although you wonder if they’ll remain as competitive. Bell will go to Joe Gibbs Racing’s No. 20 car next year, but for now, he’s looking to help Leavine get its first race win. Dover could just be where he gets it done. After all, Matt DiBenedetto drove the No. 95 to seventh at the track last October. Bell will roll off 18th Saturday, and though it’s not as far back as previous races, he could still pass other cars and earn a good finish.

Custer has also had good results at Dover in Xfinity: he won there last October and has led 214 total laps in the past three races. Additionally, he’s performed well as a rookie in Cup. His last top 10 came three weeks ago at New Hampshire Motor Speedway, where he ended the day in eighth. The No. 41 Stewart-Haas Racing wheelman was also seventh at Kansas Speedway and surprised everyone with a victory at Kentucky Speedway in July.

Custer might just try to play it safe and avoid trouble, since he’s locked into the playoffs. Hopefully, he will earn a top 15, which would raise his DraftKings score by five points (in addition to the 29 points for 15th place).

Preece has really turned things around this August, considering he didn’t finish better than 34th in July. He has two top 16s this month, the first one at NHMS. Though Dover has much more banking than New Hampshire, Preece could still adapt well to this track. He also has four straight DraftKings scores of 20 fantasy points or more, which is a fairly good value for his salary.

The No. 37 JTG Daugherty Racing driver doesn’t have very many starts at the Monster Mile, but he gained 13 positions last fall to finish 19th. Preece starts 27th on Saturday and could help you cash your DraftKings contests if he earns another top 20.