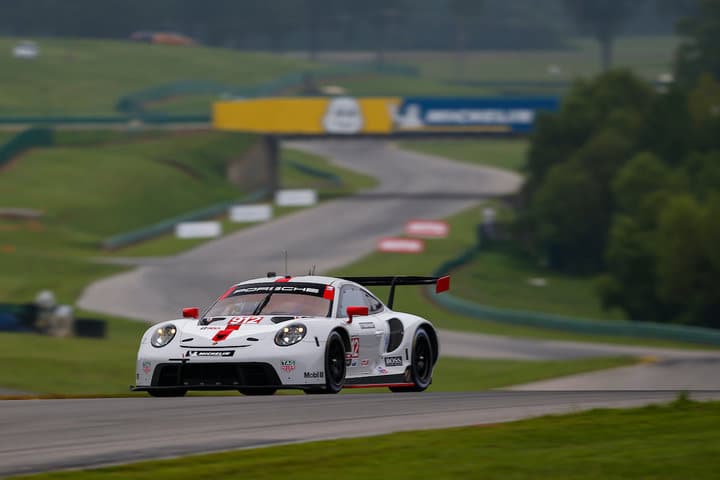 Porsche GT Team showed their muscle early Friday morning (Aug. 21) at VIRginia International Raceway.  Laurens Vanthoor turned in the fastest practice lap of the day with a lap at 115.923 mph in his Porsche 911 RSR-19.

Due to the Indianapolis 500 being moved to this weekend, the schedule was effectively swapped so that personnel that need to be in Indianapolis on Sunday can be there.  As a result, the IMSA WeatherTech SportsCar Championship’s sole dry practice of the weekend took place at 8 a.m.  Luckily, this was before the humidity came into play.

Vanthoor’s quick lap of the day came just after the halfway point of the 60-minute session after the times had slowly come down over the first 20 minutes.  Vanthoor’s lap ended up being three-eighths of a second faster than teammate Nick Tandy.  Corvette Racing’s Antonio Garcia was third fastest with teammate Tommy Milner close behind.  BMW Team RLL’s Connor De Phillippi was fifth fastest.

In GT Daytona, AVS Vasser Sullivan continued to show the speed that has allowed them to dominate the class since the season restarted.  Jack Hawksworth was fastest in class with a lap at 111.833 mph in his No. 14 Lexus RC F GT3.  That lap, good enough for seventh overall, was eight-hundredths of a second faster than Wright Motorsports’ Patrick Long in his Porsche.  Paul Miller Racing’s Bryan Sellers, making his return to the track for the first time since the Rolex 24, was third quickest in his Lamborghini.  The Ferrari of Scuderia Corsa’s Toni Vilander was fourth quickest, while Turner Motorsport’s Robby Foley was fifth in his BMW.  The first eight spots went to cars from eight different manufacturers.

The session came to an early end when Roman DeAngelis stopped his Aston Martin for The Heart of Racing off-course at Turn 4.  The car didn’t appear to be hurt much, but it was enough to bring out the red flag with a couple of minutes remaining.

The GRT Magnus Lamborghini of Andy Lally and John Potter failed to set a time during the session.  The team struggled with electrical problems for most of the day on Friday.

Prior to the afternoon session, the heavens opened at VIR, drowning the course with heavy rains.  VIR is a tricky place in the wet and with standing water all over the place, no one pressed their luck to set a time.  IMSA officials eventually put the red flag out after no one set a time in the first 33 minutes.

Following a track inspection, IMSA put out the green flag and allowed teams to venture onto the 3.27-mile road course with 20 minutes remaining in the 60-minute session.  Very few took up IMSA’s offer.

Only six of the 20 cars at the track set an official time during the final practice.  The fastest lap turned in was at 95.166 mph by Corvette Racing’s Oliver Gavin.  This lap was more than 22 seconds slower than the lap Vanthoor clocked in with in the morning.

Gavin’s lap was two-thirds of a second faster than Vanthoor.  Frederic Makowiecki in the No. 911 Porsche was third, while Garcia was fourth.  AVS Vasser Sullivan’s Aaron Telitz was fastest in GT Daytona with a lap at 92.296 mph.