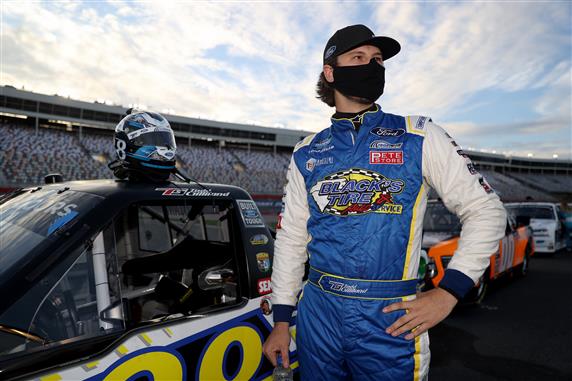 For only the fourth time this season, Todd Gilliland and Front Row Motorsports left the track feeling good with a top-five finish on Friday evening (Aug. 21).

Coming into the Gander RV & Outdoors Truck Series race at Dover International Speedway two points above the playoff cutline, Gilliland and team knew gaining points would be paramount. Despite scoring a lot of points with a fourth-place run, they may not have done enough.

“It’s tough that we had one of our best races in awhile, and we didn’t really gain anything — we lost to the No. 26 (Tyler Ankrum),” Gilliland told Frontstretch post-race. “At the same time, you can’t control what other people do. We just need to keep having top-five finishes. One of us is going to slip in the next three races, and we gotta make sure it’s not us.”

Gilliland, Derek Kraus and Ankrum were separated by a measly five points entering Dover. Leaving the Monster Mile, they’re separated by nine. The No. 38 Ford was able to maintain his 10th-place slot in the standings, but now trails Ankrum by five points and has a four-point buffer on Kraus.

The three know each other pretty well from their time racing (and dominating) the ARCA Menards Series East and West (formerly K&N Pro Series). Gilliland, a two-time champion on the West Coast, was teammates with Kraus at Bill McAnally Racing, where the current rookie won the crown last season. Ankrum raced regularly with the two, earning the east crown two years back.

“I won most of my K&N races before Derek got to winning every week,” Gilliland said. “The year after that, Ankrum won everything. It’s cool to see some K&N guys up there. I think it shows people that come out of that series and everyone that comes up into the Truck Series now is ready to go. We’re all with great teams, it’s all about minimizing mistakes and making the best of every day.”

If you glance at the box score, Gilliland has been inconsistent this season. The result on Friday, his second top-five in three races, marks the best three-race stretch for the team since Atlanta Motor Speedway/Homestead-Miami Speedway/Pocono Raceway when the COVID-19 shutdown concluded.

The speed seems to be there most weeks, and the consistency seems to be coming around. So what’s missing to make this team not just playoff worthy, but race-winning caliber?

“I don’t know. I don’t think it’s one thing we can pinpoint,” Gilliland admitted. “Today was the closest we’ve been in awhile. (At) Michigan [International Speedway], we got a top five, but we weren’t as fast as we were today. Even today, there’s still a long way to go. I think — just grip. It’s hard at a place like this because we’ve been running all 1.5-miler tracks. You gotta change your mindset from that a little bit.

“Today’s a different animal, and so is next week at Gateway. But I think we’ve done a good job of putting everything together. We’ve got a really good pit crew that’s kept us in most of these races. We’ll miss them next week, so we gotta keep putting good races together and gathering more speed along the way.”

Gilliland’s father, David, competed for his own team, DGR-Crosley, in the ARCA Menards Series East race that preceded the Truck event and was able to share some speed secrets with his son.

“He said he definitely appreciated what we were doing more, racing on the same track, the same day,” the younger Gilliland said with a chuckle. “It’s funny how that stuff works — that’s how I am watching [NASCAR] Xfinity and Cup [series]. If they slip up, I’m like, ‘Oh man, I did that there too.’ I think he was just trying to help out the ARCA program a little bit, but he definitely helped me out too.”

Gilliland and FRM will look to extend their cushion on the playoff bubble next weekend at World Wide Technology Raceway at Gateway.