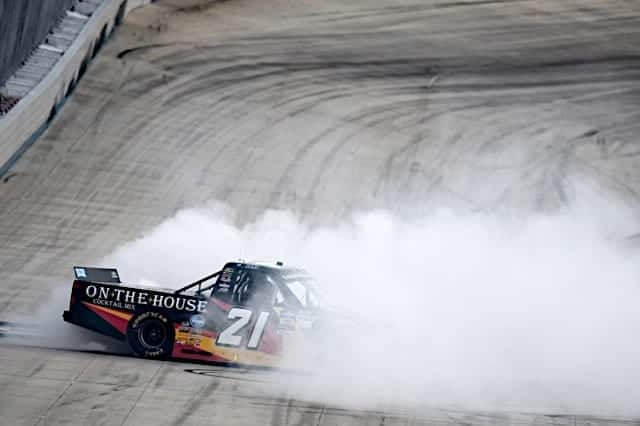 A crucial green flag pit stop flawlessly executed by Smith’s No. 21 pit crew at lap 172 of the allowed the Californian to scoot away from his primary challenger and GMS Racing teammate Brett Moffitt. However, a late caution for Stewart Friesen set up a decisive three-lap shoot out.

When Matt Crafton got a mammoth restart from the fourth position, Smith held off all challenges like a veteran to claim the win.

“I wanted that trophy so bad,” the 21-year-old Smith told FOX Sports 1. “I know there’s Busch Light in victory lane, and I’m 21 [years old] now. I wish it was a margarita, but I’m excited to get in there.”

Since Dover is the second leg of the series’ Triple Truck Challenger, Smith collected a healthy $50,000 bonus from Gander Outdoors and will have a chance to double that next time out at World Wide Technology Raceway at Gateway.

“Hopefully, I can pay off my Chevrolet Silverado,” Smith added. “But what an awesome truck. I think we all know that I suck at restarts, but it was a good time to have a good one.”

After Austin Hill captured the first stage crown, it was Smith’s fellow rookie Derek Kraus who looked as if he would pick up his first career stage win in the second segment. Despite leading his first career laps, it was not to be, as Smith used some of the lapped trucks to slip past in the waning moments just as Chandler Smith collected Ben Rhodes and Sheldon Creed in a turn 4 crash to bring out what would become the stage-ending caution.

Around goes the 51 while battling his teammate! ?@CSmithDrive goes for a spin after racing @KBMteam teammate @christianeckes! pic.twitter.com/tWNBlLMnrF

Although he did not get that coveted playoff point, Kraus leaves Dover just four points behind the playoff cutline currently occupied by Todd Gilliland.

At the start of Stage 3, Christian Eckes took control of the event but lost the lead to Moffitt, who was using the unpopular high line to make up time. Moffitt was quickly run down by Smith, who methodically worked through traffic to get back to the lead once Moffitt went to the bottom.

While Moffitt did come to pit road one lap sooner than Smith, the time gap only increased after they both completed their service allowing Smith to receive the coveted first choice on the final restart.

Although it was Smith and Moffitt who dominated, Crafton held on for the second spot. Moffitt, Gilliland and Ben Rhodes rounded out the top five at the Monster Mile.

The Trucks return to action at World Wide Technology Raceway on Sunday, Aug. 30, at noon ET. TV coverage will be provided by FOX Sports 1.