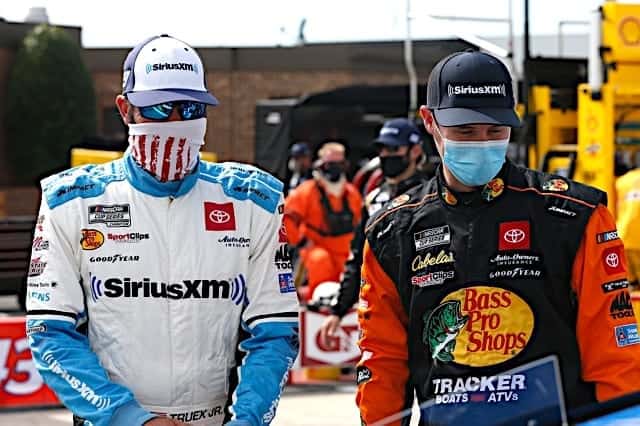 Leading a race-high 115 laps, Denny Hamlin registered win number six of the 2020 NASCAR Cup Series season, getting by Joe Gibbs Racing teammate Martin Truex Jr. for the first race of the series doubleheader at Dover International Speedway in the Drydene 311. Hamlin continues to find ways to either win or be in contention. At this point, it’s all about keeping momentum up for the No. 11 team to be at its best for the NASCAR Playoffs. Riding into it with a wave of victorious momentum doesn’t hurt either.

Clint Bowyer helped his odds of getting into the playoffs by way of points. He finished sixth, but in all honesty was solid all race long, finishing fourth in the first stage and third in the second one.

What … was the hidden gem in the race?

On the restart following a caution 25 laps into the race, Chase Elliott sustained damage after contact with Bowyer, dropping back to the 20s in the running order as his team repaired the damage. Last week’s winner rallied, fighting forward to finish fifth. His finish didn’t gain huge headlines, but it’s an effort from the No. 9 team that shows the type of resilience that’ll be needed for a run at a championship.

Where … were the other key players in the end?

Although he was no match for the 1-2-3 sweep of the top three by Joe Gibbs Racing, last week’s winner, Elliott, fought forward to finish fifth.

The winner of last year’s event at Dover, Truex, contended for the win and led 88 laps. That, however, was not enough to hold back Hamlin, who got by for the lead.

Truex’s JGR teammate, Kyle Busch finished a spot behind him. Although his winless season continues, Busch’s finish is his best since 14 races ago in Atlanta. Busch may not have a win yet, but also as important as a win is to run well going into the playoffs. He now has three top-five finishes in the past four races.

A spot behind him was Jimmie Johnson. The top 10 was nice but even nicer was the fact that he is now 16th in the points standings. If Johnson gets a similar result on Sunday, he is in good shape, at least for now, for snagging a playoff spot.

'@JimmieJohnson moved into a playoff spot with a solid run Saturday at the @MonsterMile.

The @AllyRacing driver talked about that, and his plan for Sunday at Dover and next Saturday at @DISUpdates. pic.twitter.com/1TGZGyI2xZ

As the green flag pit stops cycled through and Austin Dillon surrendered the lead in the closing laps, Truex re-inherited the lead with 30 laps to go. Truex, while also contending with lapped traffic, was eventually overtaken by Hamlin as he made the race-winning pass with nine circuits to go. Truex expressed frustration following the race.

"The No. 10 car… would just slide up in front of me like an idiot. He's the reason we lost the lead."

Martin Truex Jr. was not happy with Aric Almirola after the race. #NASCAR pic.twitter.com/6qyTduOhk5

Why … should you be paying attention on Sunday?

It won’t be as bad as it would have been had both of this weekend’s races been the usual length of 400 miles — or the 500-mile versions from back “when racing was how it used to be” — but Sunday’s conclusion of the doubleheader will be a stern test of the stamina of the drivers and the fortitude of the cars on the track. With two races in two days, Sunday may well be decided by the most durable car.

It’ll also be notable to watch Kyle Busch. Saturday in some respects was a test session. If the theory of the No. 18 being hurt by lack of practice time holds any weight, then Busch has to be considered one of Sunday’s favorites.

How … does a short race factor?

This year’s events at Dover are shortened to 311 laps. From the start on Saturday, starting with the lap-eight incident that ended Kurt Busch’s day overall and as the race went on, it showed a sense of urgency among drivers.

Fewer laps mean less time to feel a car out, and that showed with how up on the wheel drivers appeared to be. Races like Saturday poke the elephant in the room: Should shorter races be more of an option?

It’ll be interesting to see what happens as Hamlin gets alongside a couple of guys he ruffed up yesterday. I wouldn’t be a bit surprised, though if Hamlin wound up a wall hugger….