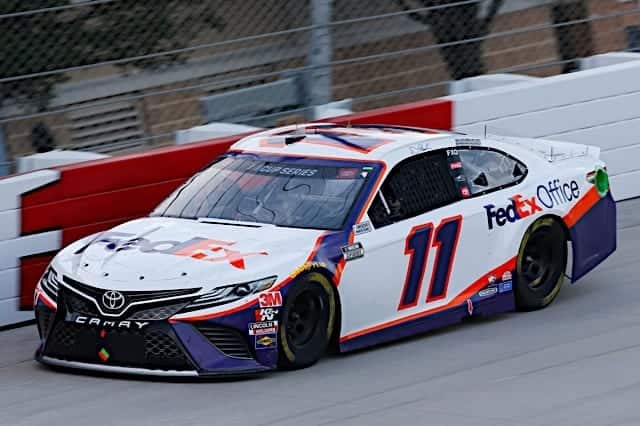 Denny Hamlin and the No. 11 team has done it again.

Hamlin led a Joe Gibbs Racing crusade on Saturday evening (Aug. 22), with the Virginia driver claiming the victory at Dover International Raceway in the first of two races this weekend. The three-time Daytona 500 champion swept the stages in Delaware and passed his Joe Gibbs Racing teammate Martin Truex Jr. for the lead with nine laps to go to take the win.

With two races now left in the regular season, Hamlin is nose-to-nose with Harvick, as both drivers have six wins apiece this season.

Saturday’s victory marked the first win for Hamlin at the Monster Mile over his 15-year NASCAR Cup Series career. His best finish prior to the Drydene 311 on Saturday was second in Fall 2018.

“I’ve been running down the leaders the last few weeks, but I haven’t been able to get there,” Hamlin told NBCSN. “This Camry was fast today. It’s unbelievable how good it was. Win No. 43, this is pretty awesome. I can’t complain about anything … I’ve just got faith. When he [Crew Chief Chris Gabehart] says, ‘Go get it,’ I just go get it.”

The Drydene 311 started shortly after 4 p.m. ET, following the conclusion of the NASCAR Xfinity Series’ race at the track.. Elliott flexed his muscles early, with a strong boost to lead the field until the competition caution on lap 25. Austin Dillon inherited the lead by using a differing pit strategy before Hamlin took the lead on lap 59 and swept all three stages.

The only other caution of the day, aside from stage breaks, was for an on-track incident on lap 8 for a wreck by Chip Ganassi Racing driver Kurt Busch, who was bumped in the left rear by Erik Jones out of turn 2. This caused Busch to spin into the inside retaining wall and cause serious damage to the left front end of the car. Jones finished 12th, while Kurt Busch went home in 40th, last place.

“I wish we had a lot more for the lead guys,” said Johnson told NBCSN. “Keeping it within 100% for my team and myself is the important thing. If we just use our head tomorrow, race smart and get clean stops, I think we’ll get ourselves more of a cushion.”

All eyes are on Johnson, who is in his final season, as he returns to the track where he has secured 11 wins in the duration of his 19-year career.

The NASCAR Cup Series drivers will run the second part of the Dover doubleheader on Sunday, Aug. 23, at 4 p.m. ET, on NBCSN.

ALL WE DO IS WIN!!
Thank you Kyle Petty for remembering.