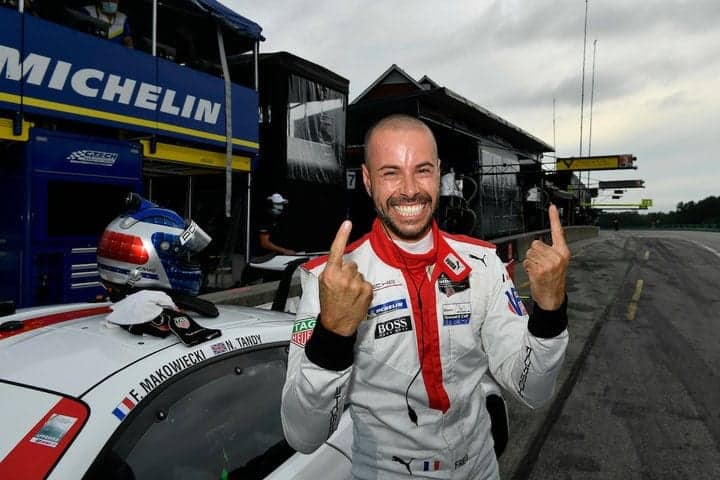 Porsche GT Team showed superior pace in the dry Friday morning and that pace continued in qualifying.  Frederic Makowiecki won the pole for Saturday’s Michelin GT Challenge at VIR with a lap at 117.264 mph, a new track record for the GT Le Mans class.

For Makowiecki, he’s actually not the most knowledgeable driver about VIR.  Unlike his teammates, he hasn’t competed there in years.

“For sure, I haven’t been here since 2016, even if I did remember the layout of the track I forget a little bit [of the elevation change that makes this track so special,” Makowiecki said after qualifying.  “It’s a big pleasure every lap to drive.  It’s also an all-star track where you need to respect the track because it’s impossible to not make a mistake.  [If you make a big one], you pay in cash.”

Makowiecki’s sentiments about VIR are fairly similar to what Laurens Vanthoor has told Frontstretch about what he likes about racing in the United States in the past.  At the time, he stated that he liked the old-school challenge that VIR provides as compared to the circuits in Europe.

Speaking of Vanthoor, he qualified second, one-eighth of a second behind his teammate.  BMW Team RLL’s Connor De Phillippi clocked in third right at the end of the session, but a full seven-tenths of a second behind Makowiecki.  Corvette Racing’s Jordan Taylor will start fourth, while teammate Oliver Gavin was fifth.

In GT Daytona, the AVS Vasser Sullivan stranglehold was broken.  The Lexuses were quick early in the session, but it was Compass Racing’s Corey Fergus that was fastest with a lap at 111.863 mph in his McLaren 720S GT3.  It is Fergus’ second pole of the season.  He won the pole for the WeatherTech 240 at Daytona in July, but got penalized before the race even started and had to start from the pits.

“It was just putting everything together, the pieces together,” Fergus said after the session.  “We struggled a little bit in practice this morning.  I had a conference call with the guys in England to just try and figure out everything we could, what was missing.  It was a team effort.  We tried out what we thought could work and it seems to have worked.”

The session had no red flags, but there was one incident.  Late in the session, Hardpoint Motorsports’ Rob Ferriol spun exiting the Oak Tree Turn and ended up in the grass.  Normally, this wouldn’t be an issue.  However, heavy rains earlier in the day meant that took three tries for Ferriol to get up the hill and get back onto the track.

The Michelin GT Challenge at VIR is scheduled to go green at 2 p.m. Saturday afternoon.  Coverage is scheduled to start at 1:25 p.m. on NBC Sports’ TrackPass.  The race will be re-aired Sunday morning at 10 a.m. on NBCSN.