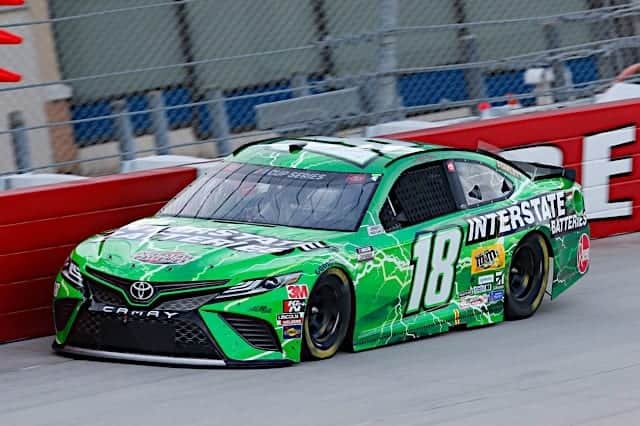 No, it wasn’t a victory for the defending Cup Series champion, but a solid, top five run on Saturday (Aug. 22) at Dover International Speedway may have been just what the doctor ordered for Kyle Busch.

He brought his No. 18 Toyota home in third place, his third top five finish in the last four races — his best streak since the sport returned from the COVID-19 break.

“Man, we just fought loose, fought tight,” Busch said. “There was never really a balance. One run I guess I felt like we were our best was when we took tires under green flag conditions there … that was the best we were. We made up some ground there.

“I guess they said I was catching the leaders. I couldn’t see them, they were so far out. We were third, kind of running them down a little bit better than them in the long run. We came in, made a slight tweak to it for the next run. Kept up with Martin [Truex Jr.] there for a little bit, then it just started to fade.”

With another 311-lap race tomorrow, the chance to build upon the momentum even further is not lost on Busch.

“As far as tomorrow goes, just the opportunity to work on our cars a little bit, make it a little bit better,” he said. “Obviously the front two guys, being JGR cars, we kind of had a good sense of what they were going with today, what they did.

“I felt like we had speed. One run we were gaining on those guys. Tiny little tweaks here and there seemed to be setting us off. Kind of crazy how that was for us today.”

Still with only one playoff point compared to his teammates racking them up left and right, his mindset entering the playoffs is, well, take it as it comes and go from there.

“I have no expectations,” he said bluntly. “Just take every event as it comes to us, every opportunity that comes to us, try to do what we can do. There’s really no expectations. It’s just a matter of being really, really far behind. We’re going to start every single one of these Playoff scenarios behind the eight ball, basically on the outside looking in. We’re going to have to do everything right.

“In a perfect world, you win races in each of those rounds to push you all the way through to the final round, you’re good at Phoenix. That’s kind of the name of the game. If we can Tony Stewart it, hopefully that will be what we can do.”

Don’t get it twisted though: Busch still is far from satisfied. Top 10 finishes and top five speed is good, but it doesn’t make him any less annoyed at the lack of race-winning speed.

“That’s where the frustration sets in, not getting the wins,” he said. “Seeing your teammates, even though they’re good, fast, they have it all under control. I also want to be one of those teammates winning races. We’re kind of missing the boat on that, unfortunately. Again, just try to focus on what we can right now and make sure that we do the right things here in these next few races, get ourselves into the Playoffs to start with, then we’ll focus on the Playoffs after that.”

Is there any hope for it to turn around anytime soon?

“Today I would say no, not really,” Busch said. “That’s about all the speed we’ve had all year. I don’t know how many seconds I lost in that final run to [Denny Hamlin]. He ran me down and passed me and drove on and passed the 19 to win the race. Those guys are flying, they’re fast. That’s where the speed is at.

“Trying to figure out what they’re doing, what they’ve got going on. Their setups are good, car drives good. It’s a matter of making sure we can kind of find some of that stuff.”

Still, though, Busch was able to make light of the situation, one he’s frankly rarely been in: not the quickest car at Joe Gibbs Racing.

“Just kidding,” he said with a smile.

The second race of the doubleheader weekend at Dover is scheduled to go green on Sunday, just past 4 p.m. EST on NBCSN.