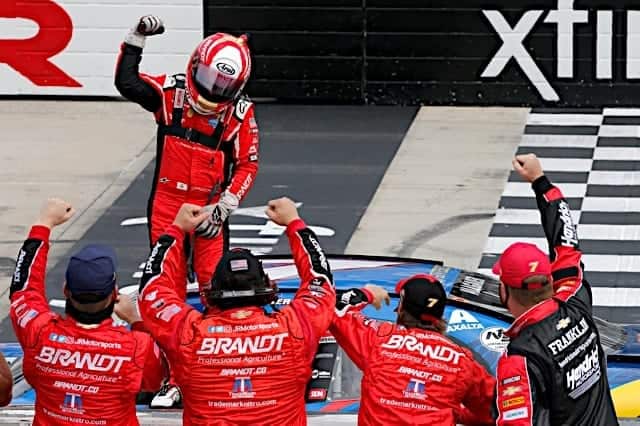 A second JR Motorsports driver has officially secured a spot in the first round of the NASCAR Xfinity Series Playoffs. After driving all season without a win, Justin Allgaier captured the checkered flag, ending a 20-race winless streak, after a strong run at Dover International Speedway during the Drydene 200.

“First of all, I can tell you that God is great man, and these last 18 to 24 months have been crazy,” Allgaier said as he celebrated on the start/finish line. “This team is incredible … What a day. What a race car.” Allgaier added that he felt they were off in the beginning, but adjustments put the FFA Chevrolet Camaro back in the hands of the victor.

Allgaier dominated stage three after securing the second stage win. Austin Cindric started up front and ended up winning his ninth stage win, with Noah Gragson (who started second) trailing the Ford Mustang the first 50 laps. However, it was Cindric who ended up chasing Gragson and Allgaier most of stage two before Allgaier claimed that stage and dominated the rest of the race, the first of four races in an Xfinity and Cup Series double-doubleheader weekend.

“The track didn’t quite move around,” Cindric, who currently sits first in points with two races left in the regular season, said after his runner-up finish. “We’ve got some things we can execute better on but great points day. I had a great battle with Justin; obviously he wanted it really bad. He drove the wheels off that thing. Props to him and those guys and we’ll try to do better tomorrow.”

There were four cautions throughout the race. Following the first competition caution, Briscoe received damage to the right-front fender after spinning out of turn two and wrecking on the backstretch on lap 77. Briscoe’s misfortune came after getting loose while attempting to pass Cindric for third position.

THE 9️⃣8️⃣ SPINS! @ChaseBriscoe5 loses control coming off of the corner midway through Stage 2. pic.twitter.com/Xj80ezQZDK

“I feel like we can get turned around tomorrow, probably go to a backup,” Briscoe said. “We did it here last year — started last, came back and lead a lot of laps. I felt like we were pretty decent today, we just never got clean air today.”

Other cautions included BJ McLeod striking the turn two wall on lap 150, and Brandon Jones spinning in the apex of turns three and four on lap 163.

The NASCAR Xfinity Series competitors will return to on-track action on Sunday, Aug. 23, at 1:30 p.m. ET, with the TV broadcast on NBCSN.