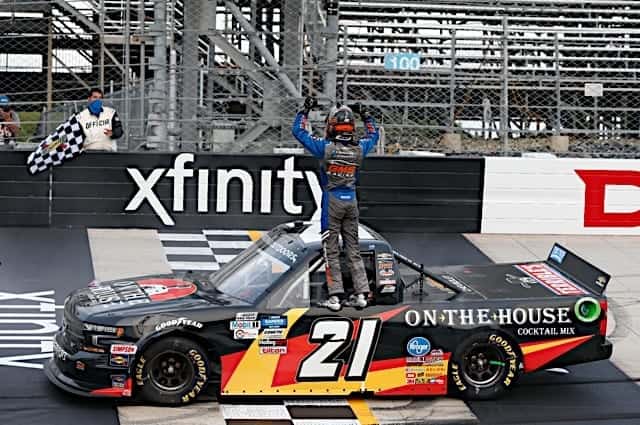 In a Nutshell: Zane Smith scored his second win in the last three races Friday evening at Dover International Speedway. The rookie made a near-perfect restart with three laps remaining to hold off veterans Matt Crafton and Brett Moffitt en route to his fourth top 10 in the last five races.

Late restart? No problem for the 2️⃣1️⃣.@zanesmith77 said buh-bye to the field as he raced on to his @MonsterMile win. pic.twitter.com/6WGczQdfwN

Crafton and Moffitt, who led a season-high 50 laps, ended up second and third, respectively. Todd Gilliland tied his season-best finish in fourth, and Ben Rhodes rounded out the top five.

For the first time in a season that’s best characterized as dismal, Stewart Friesen posted back-to-back top-10 finishes with a ninth-place run at Dover, despite a late-race spin that brought out the final yellow with just seven laps remaining.

HOLD EVERYTHING! ?@StewartFriesen goes for a loop to bring out a late yellow at the @MonsterMile! pic.twitter.com/fHauSuL0fA

Because there were so few trucks on the lead lap, Friesen was able to restart 10th with three laps to go.

“It was solid. We unloaded probably better than we did all year, and ran in the top 10,” Friesen said. “It was just a tough track position deal, but the Halmar Tundra was good. It was crazy there at the end. It looked like some oil got laid down, and I spun in it.

“It’s a tough caliber of teams this year. There are 20 guys that can win every week, so back-to-back top-10s, we will take it and keep building the notebook.”

For Friesen, it’s some much-needed momentum in a season that his seen the No. 52 team struggle in almost every way you could imagine. Heading into World Wide Technology Raceway at Gateway next weekend, Friesen looks to capitalize on that momentum at a track where he led 20 laps and finished third last season.

“We have some good notes. Obviously, everything is a little bit different this year than in years past. We will just keep trying to build that notebook and use some of our experience there. The shifting in (turns) one and two is unique for Gateway, so I got that down pretty good last year and was able to utilize that a little better than I did in years past. Looking forward to it.”

Friesen will need a win to make this year’s playoff field as he’s currently 97 points outside the cut line with just three races remaining.

Today's field of 35 trucks is the fewest amount since the Truck Series returned at Charlotte in late May.

Number of Rookies in Race: 8

Fun day at @MonsterMile! Finished 2nd in stage two lost some track position and ended up 10th. Another solid top-10!

Lots of good today other than the result. Led laps, ran top-3, finished 11th in the @safelite @KBMteam Tundra due to motor issues. Long weekend then back to work for @WWTRaceway!

Up and down day. @mark_rette made some good calls on the box, ran top 5 for a while and had a lap car cost us stage points on stage 2. During the stage 2 end we developed motor issues, came down pit road and checked it all out, limped home to p16(?). @TeamSDM11 has speed. No luck

Tough race tonight – P19! We had some trouble with the grip and a penalty in the pits. We’ll keep digging and come back even stronger. Next race: @WWTRaceway ?? Many thanks to @canac_ca for the support! pic.twitter.com/m3CJoIG12t

Points Update: Zane Smith moved up a position to second in the standings and gained ground on Austin Hill, whose point lead shrank to 41 markers. Moffitt dropped to third, followed by Eckes, who moved up one spot to fourth. Rhodes rounds out the top five.

Creed remains sixth, followed by ThorSport Racing teammates Crafton and Grant Enfinger. Tyler Ankrum and Gilliland round out the top 10, though neither one is secure in their spot about the playoff cut line. Ankrum holds a nine-point advantage over 11th-place Kraus, while Gilliland’s cushion is just four markers with three races remaining to set the playoff field.

Up Next: The Truck Series heads to World Wide Technology Raceway at Gateway for the third and final race in the Triple Truck Challenge. Coverage for the WWT Raceway 200 presented by CK Power begins at 12 p.m. ET, Sunday, Aug. 30 on FOX Sports 1; the race can also be heard on your local MRN affiliate or SiriusXM NASCAR Channel 90.