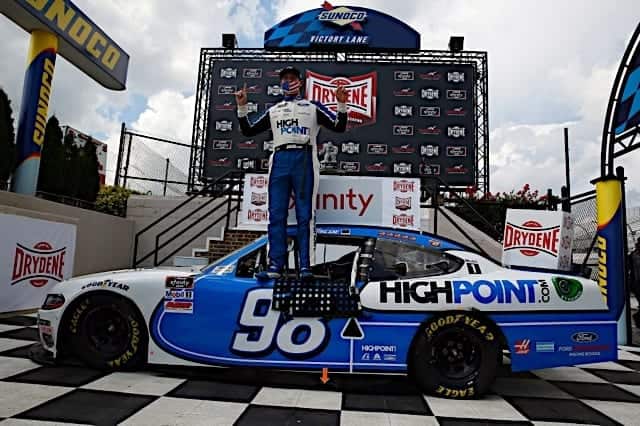 This time, it was Chase Briscoe’s turn to dominate.

Starting from the rear of the field after going to a backup car following Saturday’s first half of the NASCAR Xfinity Series doubleheader at Dover International Speedway, Briscoe wasted little time racing through the field to win the Drydene 200 on Sunday afternoon (Aug. 23).

The win was Briscoe’s sixth of the season, but his first in the past seven races.

Briscoe needed just 11 laps from the waive of the green flag to gain 17 spots. It was only a matter of time before he made his way to the front, taking the lead near the end of the second stage to win the segment. Overall, he led three times for 107 laps on Sunday.

“It’s just a testament to these guys to pull a backup [car] out [and win]. Honestly, it was better than our primary. It’s pretty cool to win from the back,” Briscoe told NBCSN. “We haven’t won in a month in a half, it feels like five years. Truthfully, today is probably one of the most dominant cars we have had all year long.”

In fact, Briscoe was apparently confident he would grab the checkered flag before the race even began, gauranteeing the victory to his wife, Marissa.

Chase called me before the race and said “I’m going to win this race today” Bring it home babe!! ??

Ross Chastain, who finished second, won the first stage, capping a strong weekend for him after finishing third on Saturday. He remains the highest-ranked driver in the points standings without a race victory this season.

“To run with him and the No. 22 car that has been kicking our butt all year long is a big statement,” Chastain said. “We did it both days, we were consistently up there. I’m just happy we have the speed. When we win, we’ll win a lot.”

Ross Chastain says he's upset about contact with Chase Briscoe late in the race but notes he would have done the same thing pic.twitter.com/h4X1WGb1x6

Briscoe was not the only driver flexing muscle by coming from the rear of the field. Daniel Hemric started from the back after a driver change in the No. 8 car, as Jeb Burton drove in Saturday’s race. Hemric finished fifth despite contact with Brandon Jones on pit road. Jones also continued on, finishing fourth, a spot being Austin Cindric.

The caution flag waved just twice for on-track incidents in the 200-lap event. As a result, just seven drivers finished on the lead lap. Still, that didn’t stop a handful of drivers from taking a pit-strategy gamble to try and steal a win. While Hemric was among the first of the frontrunners to pit for the final time with 38 laps to go and was later followed by the likes of Briscoe, Chastain and Cindric, others tried a different strategy.

It nearly worked for the gamblers, as with 31 laps to go, the No. 99 car of Stefan Parsons spun near the entry to pit road. However, the caution flag did not fly for this incident. Had the caution come out, approximately five cars would have been on the lead lap with Briscoe among those trapped a lap down.

Noah Gragson, Michael Annett and Justin Allgaier, who won Saturday’s race, were among those taking an alternate pit strategy. But they all eventually had to pit, giving the lead back to Briscoe with 13 laps to go as he cruised to the win. Gragson finished sixth, Allgaier seventh and Annett eighth.

Five races remain in the Xfinity Series’ regular season. Up next, the NXS drivers take on Daytona International Speedway on Friday night, Aug. 28.