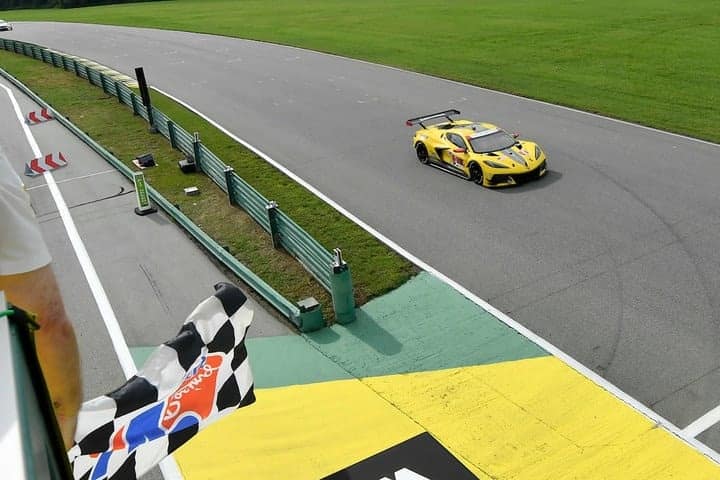 Corvette Racing’s Jordan Taylor and Antonio Garcia overcome troubles Saturday (Aug. 23) to claim overall victory in the Michelin GT Challenge at VIR.  It is the fourth straight victory for Corvette Racing and the third in four races for Garcia and Taylor.

“I think it’s just a staple of Corvette Racing and never giving up and of attrition really,” Taylor said after the race.  “We were the ones that survived the race with minimal issues.  Everyone else either
went off the track or had tire issues.  We had our own little issues, but we were able to execute on top of it and come away with a win for Corvette.”

Porsche GT Team’s Frederic Makowiecki started from pole and led early Saturday.  Then, bad luck struck.  Makowiecki cut his left rear tire and was forced to trundle around the 3.27-mile road course at a reduced pace in order to get back to the pits without damaging his Porsche 911 RSR-19.  Makowiecki managed to avoid significant damage, but he lost a lot of time and dropped nearly to the rear of the field, behind even the GT Daytona cars.  That gave the lead to Laurens Vanthoor in the No. 912 Porsche.

Shortly afterwards, Gradient Racing’s Till Bechtolsheimer spun off and hit the wall in Turn 3, bringing out a full course caution.  Not only did that allow Makowiecki to catch up to the field, but work out some pit strategy.  Being able to skip a tire change and take a minimal amount of fuel, Makowiecki was able to jump back into the overall lead.

Just before the caution flew, BMW Team RLL’s John Edwards had pitted with steering issues.  The team couldn’t diagnose the issue right now and sent Edwards back out.  During the caution, the steering outright broke on Edwards’ car, putting him in the wet grass.  The soppy conditions combined with the steering woes meant that Edwards got stuck in the grass and required a tow.  The No. 24 BMW would return to the race 15 laps down after repairs.

Makowiecki continued to lead with ease.  Teammate Earl Bamber in the No. 912 was second, but had contact with the No. 25 BMW of Connor de Phillippi.  This resulted in a stop during the third full course yellow to replace the rear bodywork due to a loose undertray.  This repair ultimately didn’t take, forcing to the team to make a costly pit stop under green for more repairs that cost them a couple of laps.

Ultimately, everyone had trouble at one point during the race.  De Phillippi was second until he spun into the tires at the Oak Tree Turn.  He was able to resume, though.  Late in the race, Nick Tandy was able to stretch out a 14-second over Garcia.  Then, everything fell apart.  Tandy ended up puncturing the inside shoulder of his left rear tire.  The issue forced Tandy to make a pit stop with 18 minutes to go.

The pit stop gave the overall lead to Garcia, but he had issues of his own.  A vibration in the rear of his Chevrolet Corvette C8.R due to a diffuser issue made the final laps a complete nightmare.  Meanwhile, Tandy was driving like a man possessed.  He set the fastest lap of the race in the closing laps as he tried to get back what he felt was rightfully his.  The Corvette was able to hold out, giving Taylor and Garcia the win.

“As soon as the Porsche caught problems and I saw him pull in the pits…the whole thing started to shake a lot,” Garcia explained.  “So the [Chevrolet Corvette] C8.R is also good with almost no rear diffuser or rear splitter.  I’m very proud of that.  Very proud that everything stayed in one piece even though it was very challenging to drive there at the end.”

Despite the earlier tire contact, De Phillippi and Bruno Spengler came back to finish second.  Tandy and Makowiecki were right behind in third.  Oliver Gavin and Tommy Milner in the second Corvette were fourth, 70 seconds behind while Bamber and Laurens Vanthoor had to settle for fifth.

In GT Daytona, Compass Racing’s Corey Fergus started from the pole in his McLaren 720S GT3, but his advantage did not last for long.  At the first corner, Turner Motorsport’s Robby Foley was able to get past to take the class lead.  At the same time that was happening, Paul Miller Racing’s Madison Snow had contact with AVS Vasser Sullivan’s Frankie Montecalvo, shearing a dive plane off of Snow’s Lamborghini Huracan GT3.  That drew an early full course caution.

Meyer Shank Racing with Curb-Agajanian’s Matt McMurry followed Foley past Fergus into second.  Once the green came back out, the two fought for the class lead.  Foley was able to hold off McMurry’s advances.

Further back, Hardpoint Motorsports’ Rob Ferriol had an adventurous time in his Audi.  Early in the race, he spun off-course in the Hog Pen (Turn 17) and did a 360 in the grass.  That didn’t hurt the Audi.  What did hurt the Audi was Ferriol dropping part of a wheel exiting Turn 10.  The wet grass sent Ferriol off the track and into the tires to bring out the race’s third full course caution.  Ferriol was eventually able to extricate his car from the tires, but had to go behind the wall for repairs.  The team would eventually return to the track, but pulled out of the race prior to the finish.

This caution came a little too early for GT Daytona teams since the race went back green before the 45-minute minimum drive-time for amateur drivers would be satisfied.  It resulted in a split pit strategy.  Drivers that weren’t so concerned about drive time (Foley, McMurry, Snow) pitted while others stayed out.  That put GRT Magnus’ John Potter in the lead briefly for the restart.  The 45-minute minimum was met during the first lap back under green, so Potter then pitted from the lead.

That gave the lead over to Montecalvo, who was able to hold on until he made a stop 70 minutes in so that Townsend Bell could get into the car.  Montecalvo’s stop put Foley back in the lead, an advantage he held until his final stop with 58 minutes remaining, when Bill Auberlen got into the car.

Following the final round of stops, Auberlen ended up with the lead while an aggressive Mario Farnbacher was right on his tail.  Farnbacher was a bit too aggressive.  A couple of laps after Auberlen’s stop, he went into Turn 1 way too fast in an attempt to get past and went off-course, dropping to fourth.

That excursion allowed Auberlen to open up a decent gap on the rest of the contenders, who went to town on themselves.  Paul Miller Racing’s Bryan Sellers inherited second after Farnbacher’s mishap, while Riley Motorsports’ Lawson Aschenbach was third.

Farnbacher was able to run down Sellers and Aschenbach from about four seconds back, then made an outside pass on Aschenbach entering the Climbing Esses for third.  The GT Le Mans class leaders came through the battle in the final couple of laps.  Farnbacher was able to use Tandy to get past Sellers for second on the final lap, but they could not catch Auberlen, who took the victory for Turner Motorsport.

“I said my best win I ever had of my career was Petit Le Mans last year, but I think this one has to top it. There were a lot of people who got me here along the way, but the first one here is Robby [Foley].  Look what he did here today, he drove the majority of this race.  He did what he always does, he drove it flawless and he stayed in the lead.  It definitely makes our job a lot easier.  You also have to thank BMW, they’ve given me a home.  They’ve given me a place to win races in any car they’ve ever given me.  You name it, I’ve driven it.  And we’ve won in everything.  So to be a part of a company that is so
incredible has been an honor for me.”

Auberlen and Foley’s margin of victory was 7.511 seconds over Farnbacher and McMurry.  The Paul Miller Racing Lamborghini of Snow and Sellers was third over the line.

However, the No. 48 Lamborghini flunked the post-race fuel capacity test.  As a result, Snow and Sellers were reclassified to rear of the field.  The penalty moved Aschenbach and Gar Robinson to a third-place finish.  AVS Vasser Sullivan’s Jack Hawksworth and Aaron Telitz finished fourth in the No. 14 Lexus, while Wright Motorsports’ Ryan Hardwick and Patrick Long were fifth.

IMSA WeatherTech SportsCar Championship teams will take next weekend off before traveling to Michelin Raceway Road Atlanta for the all-new TireRack.com Grand Prix.  This is a new six-hour race that was recently inserted into the schedule in order to replace the now-cancelled Sahlen’s Six Hours at the Glen.