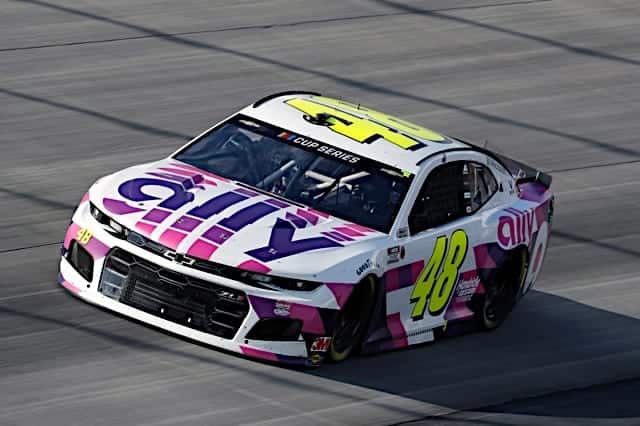 His Hendrick Motorsports teammate William Byron finished one spot behind him in fourth, meaning the seven-time champion sits a mere four points behind the No. 24 with one race remaining in the regular season.

“It’s going to be a really interesting race in Daytona from that respect,” Johnson said. “But at the same time, it’s still Daytona, and in my opinion, ‘the big one’ or all the wrecks that can happen is really going to determine who makes it into the playoffs.”

Restarting with under 20 laps to go as the leader, Johnson knew he was a bit of a sitting duck on older tires. Eventual winner Kevin Harvick blew by in one lap, but it wound up gaining the No. 48 a couple points.

“We had a really good car, and I really credit Cliff for making that brave call for two tires,” he said. “I think we were one of the fastest cars if not the fastest car over the last two runs, just unfortunately clawing our way back in from losing track position, and we didn’t have the best stop two from the end, so we really just had to gamble.”

“I really appreciate his courage to do that. It netted a better finish. Certainly wish there was more there, but a great couple days here in Dover […] we did the best that we could here over these two days, had two respectable results, closed the gap, but now it’s kind of in luck’s hands or in fate’s hands down in Daytona at the plate rate.”

Going to a superspeedway where what others around you do may mean more than what you do yourself, Johnson doesn’t expect to rely on his experience to propel him into the postseason.

In fact, it may not make a difference at all.

“It’s hard to say it would separate me,” he said. “I look at this weekend and think my experience played into my hand and helped me gain points on the two cars that I needed to. To go to Daytona where you don’t really work on your cars, you’re in a draft, in a pack, there is some skill needed in the draft to make that work and to create opportunity, but I think it’s a smaller window of opportunity than what we have on a traditional race.”

Although he did score a top five two races ago at the Daytona Road Course (fourth), this result was Johnson’s first top-five finish on an oval since Bristol in late May, some 15 races ago.

“Momentum really works for you in either direction, and to run good at Daytona, to run decent at Michigan, to take these two races this weekend, top 10 and a top 5, that’s all going the right way, and it helps me. It helps every one of us on the team.”

If this is indeed it for Johnson at the Monster Mile, his stats, unsurprisingly, are wildly impressive. An average finish of 9.7, over 3,100 laps led, 11 victories and almost a 50 percent top-five rate only begin to tell the story of JJ and Dover.

“This place is a blast to drive,” he said. “I’ve always enjoyed coming here and making laps, and if the phone ever rings and I can pick the Cup race to come back and run, I would choose this track. We’ll see what happens out there in years to come.”

After seven championships and over 80 victories together, you’d think there’d be some witty banter between Chad Knaus and the driver of the No. 48.

But as per usual, it’s been all business between the two future Hall of Famers.

“No trash talking, but we did see each other a few times on pit road,” Johnson said. “Neither of us want to be in this position. I think we both know that here we are with one race left, and it feels like everything is on the line.  But we’ve had 25 races — I’ve had 24 versus their 25, to not put ourselves in this position.

“You know, I think we both reflect back on the year and the moments that got away, and we’ll just go see how a restrictor plate race can settle this thing.”

Johnson will look to grab the final playoff spot in next weekend’s Coke Zero 400 from Daytona International Speedway on Saturday, Aug. 29.

why do i have a feeling that a jimmie johnson inclusion in the playoffs is coming.

Reddick or Newman wins taking another points berth away, Johnson and Byron both get caught in the BIG ONE and neither make the playoffs, DiBenedetto gets the last playoff berth.

The worst part, not one of the drivers I named above have had a championship worthy season, so what a farce.

I wonder how it would of played out if JJ didn’t have that penalty, kept his great track position and got 4 tires instead of 2 tires on that last pit stop. IF DOG RABBIT!