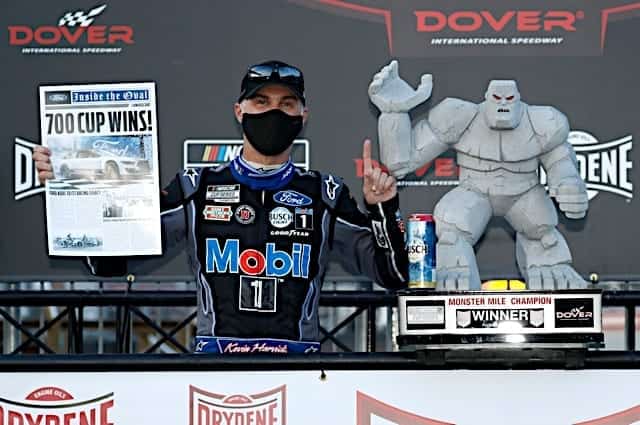 He and his team reminded all observers what they have done all season long to earn it.

Harvick swept all stages and took the win on Sunday in the second half of the NASCAR Cup Series weekend doubleheader at the one-mile concrete oval, leading 223 laps for his seventh win of the season.

“What a year, what a seven years,” Harvick said. “Just really proud of everybody at Stewart-Haas Racing and to be able to drive this car. Week after week, they just put in so much effort into making this thing go fast, and it’s just been a great year.”

As the field took the 151st lap, Harvick clinched the regular season title. But he was far from content to stop with a big points day.

Harvick led for the first time near the end of the first stage, going to the outside to pass Ryan Blaney coming to the white flag. Harvick continued to dominate in the second stage, winning it as well.

Harvick continued to pace the field in the final stage, but had to fight hard for the win after the caution flag flew with 23 to go when Corey LaJoie got into the wall. With all of the frontrunners needing tires, most of the leaders took on four tires and fuel. Jimmie Johnson was the exception, gambling for a chance at a playoff-clinching win by taking on just two tires.

Restarting with 17 laps to go on the high side, Johnson surrendered the lead within a handful of laps to Harvick. The dice roll by No. 48 crew chief Cliff Daniels was not a total loss. Johnson finished third to end a day in which he came back from a pit road penalty. He is now 17th in the standings, four behind William Byron and 13 back of Matt DiBenedetto.

"I'm not gone forever. Just trying to slow down a little bit."@JimmieJohnson's last race, for now, at the @MonsterMile is a third-place finish. He's four points below the cutline to make the #NASCARPlayoffs in his final full-time season. pic.twitter.com/M3IPPcMZ67

Byron, the other Hendrick Motorsports driver trying to cement a playoff spot, rebounded from a rough outing on Saturday — when he finished 28th — to finish fourth on Sunday. More importantly, he moved back into the 16th spot.

Martin Truex Jr., who finished second, has now finished third or better in his past seven races. Alex Bowman finished fifth to give Hendrick Motorsports three drivers in the top five.

For last Sunday’s winner, Chase Elliott, his chances of winning were over before almost before they began. On the fifth lap, Ricky Stenhouse Jr., spun into the inside wall of the front stretch after slight contact with Joey Logano. In trying to avoid the wreck in front of them, Kyle Busch checked up, and Elliott made contact with the No. 18, damaging his Chevrolet badly enough to end his day early. Garrett Smithley and Joey Gase were also involved.

Kyle Busch was able to drive away to continue on, finishing 11th. For Stenhouse Jr., he now heads to Daytona next weekend needing a win to get into the playoffs. Kyle Busch, Kurt Busch and Aric Almirola‘s days were good enough for each of them to clinch playoff spots.

Denny Hamlin‘s hopes of a weekend sweep rolled away by way of a loose wheel following a late-race round of pit stops, relegating him off the lead lap at the time. Hamlin finished 19th.

The race was delayed for approximately 12 minutes to repair a piece of concrete within the track’s racing surface near the restart zone following the completion of the first stage.

The NASCAR Cup Series completes the regular season on Saturday, Aug. 29 at Daytona International Speedway in the Coke Zero Sugar 400. The broadcast is scheduled to start at 7:30 pm on NBC.