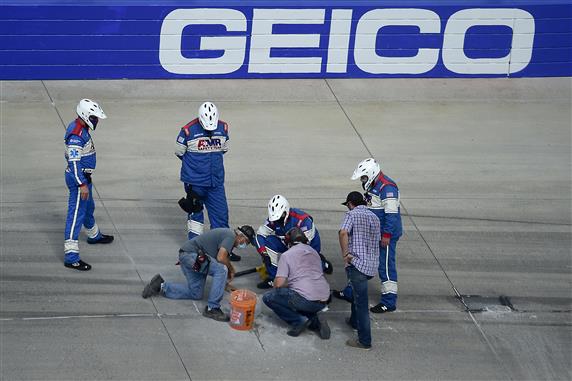 Sunday’s NASCAR Cup Series Drydene 311 was brought to a screeching halt to address an issue with the racing surface at Dover International Speedway.

As pit stops completed following the first stage, the race was red-flagged for 12 minutes and 19 seconds to repair a patch of the track’s racing surface near the restart zone.

The delay came in the final race of a weekend in which a combined 1,011 laps were scheduled on Dover’s concrete racing surface, which was installed between the 1994 and 1995 seasons.

is this the equivalent of Miles going to the dentist, @MonsterMile? pic.twitter.com/3a7DtBclk8

This isn’t Dover’s first in-race delay due to an issue with its racing surface. In 2014, Jamie McMurray hit a chunk of concrete that came loose after Ryan Newman ran over it, with a piece of it hitting the track’s pedestrian bridge.