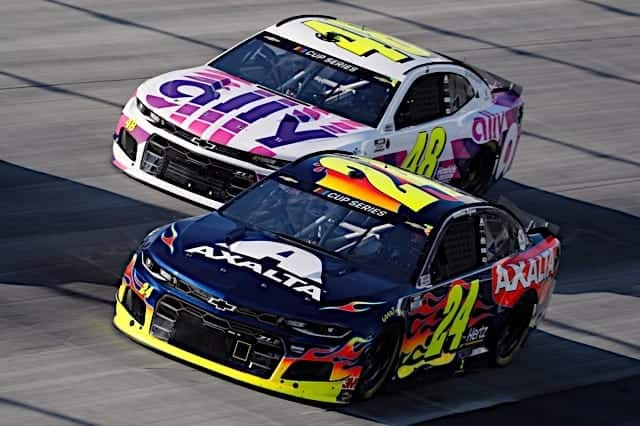 This weekend was the first time both the NASCAR Cup and Xfinity series held doubleheaders at the Monster Mile. And boy, did those races deliver. The sport now finds itself with a spirited Cup playoff battle heading into the regular season finale for the series. Daytona International Speedway has plenty of storylines attached along with a plethora of desperate teams trying to steal a Cup playoff-clinching victory.

Meanwhile, both veterans and rookies were victorious at the Monster Mile. With five national touring series racing over a three-day span, there’s a ton of interesting stats to dive into from the weekend.

Next weekend’s NASCAR Cup Series regular season finale at Daytona is going to be complete chaos.

Why, you ask? Well, it’s pack racing, so evidently it’s going to wild. But electricity is in the air after Dover’s doubleheader left the Cup playoff race more unsettled than ever.

Entering the weekend, Matt DiBenedetto was sitting comfortably, more than 40 points above the cutline. That advantage has now evaporated for the driver of the No. 21 Wood Brothers Racing Ford.

William Byron entered with a 25-point advantage over his Hendrick Motorsports teammate Jimmie Johnson. But the No. 24 Chevrolet was out to lunch in the opening race of the weekend, losing those 25 points and more. In fact, he entered Sunday’s race (Aug. 23) three points behind the No. 48 team. Johnson finished seventh while the No. 24 car finished a disappointing 28th.

But then Byron came to play on Sunday.

On a lap 32 caution, he was one of three drivers to stay out, crew chief Chad Knaus giving the No. 24 car track position. The third-year driver then kept that track position for the rest of the race, scoring a total of 13 stage points. Johnson, on the other hand, had five.

With 22 laps to go, the final caution came out and Johnson took two tires, giving the No. 48 the lead and the upper hand on Byron. Over the final few laps, Johnson held onto third, a strong effort after a pit road speeding penalty kept him in traffic most of the day. But Byron finished fourth, scoring his first top-five result of the season, and those stage points leapfrogged him back ahead of his Hendrick teammate.

That seesaw battle, plus Matty D’s struggles, mean Saturday night at Daytona (Aug. 29) is going to be must-watch television. With finishes of 17th and 20th this weekend, DiBenedetto is just nine points above the cutline. Byron is up four on Johnson, who enters what could be his final race at Daytona on the outside looking in.

You know a driver is having a good season in NASCAR when they go to one of their worst tracks on the circuit and whip the competition. That’s what Denny Hamlin did on Saturday at Dover.

Hamlin began the 311-lap race from second position and didn’t grab the lead until lap 59. But once the No. 11 Toyota was out front… sayonara.

That was, of course, until his Joe Gibbs Racing teammate Martin Truex Jr. won the race off pit road to begin the third stage. At a track that’s known for clean air being kind, the No. 19 Toyota went on to lead the next 65 laps. He relinquished the top spot during green-flag pit stops, resuming it once the cycle ended. But with 10 laps to go, Hamlin got by, going on to win his sixth race of the season and first at Dover.

By leading a race-high 115 laps, in addition to pacing the field for 218 circuits last fall at Dover, Hamlin led 333 laps over the past two races at one of his worst tracks. In his previous 27 starts at the Monster Mile, he’d led just 276 circuits.

“I felt like I was always a fifth-place driver at this racetrack,” Hamlin said after the win Saturday. “I feel like I’ve gotten better.  Obviously, I’m in the prime of my career right now, got things rolling.  But this definitely gives me a ton of confidence winning at a track I would arguably say is my worst.”

It’s also got Hamlin running at all cylinders as he prepares for a deep Cup playoff run.

Ever since the last race of the 2018 NASCAR Xfinity Series regular season, it’s been a struggle for Justin Allgaier.

Sure, the No. 7 JR Motorsports Chevolet has been fast, piling up stage win after stage win. Allgaier could have captured at least 10 races over the past year and a half. But what does he actually have to show for his efforts going into the weekend? One total victory in 60 races.

That was until Saturday at Dover, where Allgaier dominated, leading a race-high 120 laps en route to the triumph. The win was huge for the veteran, snapping a 20-race losing streak dating back to the penultimate race of the 2019 season at Phoenix Raceway. Hell, when I asked him post-race what this trophy does to Allgaier’s mentality, he mentioned those same thoughts.

How bad has it been for Allgaier mentally? He said he’s questioned why he’s still racing “probably 10 times over the last six months” to his wife, Ashley.

It took 538 laps out front this season, but Allgaier finally led the most important one on Saturday. Don’t be surprised if he now goes on a tear, similar to the 2018 regular season, winning five times and putting this JRM team in title contention.

Prior to Sunday’s Xfinity race, Chase Briscoe called his shot, telling wife Marissa he was going to win. And boy, did he live up to that vow.

Due to a spin into the inside wall in Saturday’s race, Briscoe had to start shotgun on the field, going to a backup car. That was after he drove the damaged No. 98 Ford to a 10th-place finish.

On Sunday, Briscoe wasted no time getting to the front; going high, low, anywhere his competitors weren’t, using up every inch of the racetrack. After 45 laps, he finished the first stage in sixth. Midway through stage two, the No. 98 car found the lead for the first time and didn’t look back, leading 107 laps — a career high for a single race — of the final 130 scheduled.

Come lap 200, Briscoe found himself in victory lane for the sixth time this season. With his performance all year long, it sure looks like that No. 98 team is a lock for the Championship 4 at Phoenix Raceway.

From last to first today, what a @HighPoint @FordPerformance Mustang!

Here’s a picture of me with my new friend Miles, he’s pretty cool. pic.twitter.com/eOZLPQEVKR

Is anyone as surprised as I am that 2018 NASCAR Gander RV & Outdoors Series champion Brett Moffitt has yet to enter victory lane this season?

Moffitt has shown speed much of the year, leading 150 circuits in 13 starts. While that’s impressive for many Truck drivers, it’s on pace to be well below his season totals from last year, his first season with GMS Racing. Meanwhile, Moffitt’s teammates Sheldon Creed and Zane Smith have two wins apiece, taking the past three overall in the series dating back to Michigan International Speedway earlier this month.

Moffitt finished third in Friday’s KDI Office Technology 200 at Dover after leading 50 laps. He sits third in the championship standings, within striking distance of points leader Austin Hill for the regular season championship (-47 with three races to go).

Unfortunately for him, though, he believes the No. 23 team is down on speed this year, saying, “… I’m definitely frustrated, because we seem to only have speed to be able to make our way up into the top three.”

Three is not the magic number for Moffitt. But can World Wide Technology Raceway provide the magic touch? The Truck Series heads there this weekend, an oval where Moffitt ran strong last year (fifth).