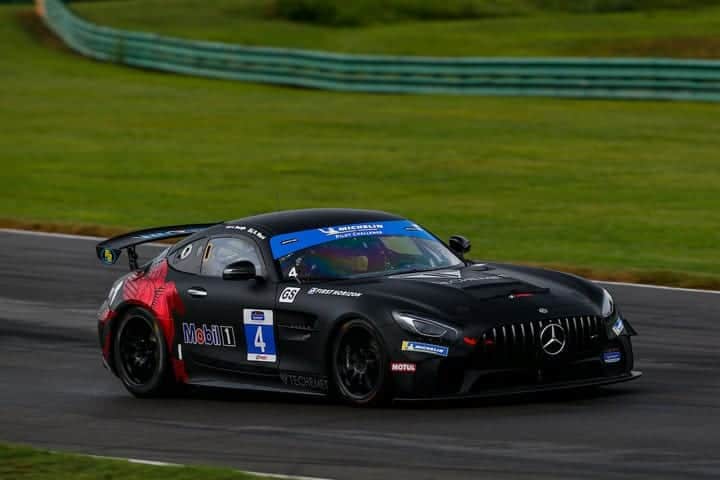 Early Sunday morning (Aug. 23), Winward Racing’s Russell Ward claimed the overall pole for the Virginia Is For Racing Lovers Grand Prix with a lap at 103.838 mph.  It is Ward’s first career pole position in his Mercedes-AMG GT4.

Ward’s lap was less than two-hundredths of a second faster than the Aston Martin of KohR Motorsports’ Nate Stacy.  Turner Motorsport’s Robby Foley, fresh off of a class victory in Saturday’s Michelin GT Challenge at VIR, will start third in the No. 95 BMW.  CarBahn Motorsports with Peregrine Racing’s Tyler McQuarrie qualified his Audi in fourth, while Multimatic Motorsports’ Scott Maxwell will start fifth.

There were no cautions during the two qualifying sessions.  However, in the closing minutes of the Grand Sport session, BGB Motorsports’ Thomas Collingwood went off-course in the Hog Pen (Turn 17).  He was far enough off the circuit that the session did not need to be neutralized.

In TCR, Fast MD Racing kept up their form from Friday and Saturday.  Max Faulkner put his Audi RS3 LMS Club Sport on the class pole with a lap at 100.392 mph, good for 18th overall.  Faulkner’s lap was one-sixth of a second faster than the similar Audi of JDC-Miller MotorSports’ Michael Johnson.  Bryan Herta Autosport teammates Michael Lewis, Gabby Chaves and Harry Gottsacker were third, fourth and fifth respectively in their Hyundais.

The Virginia Is For Racing Lovers Grand Prix is scheduled to go green at 2:55 p.m.  The race will be streamed live on NBC Sports’ TrackPass.