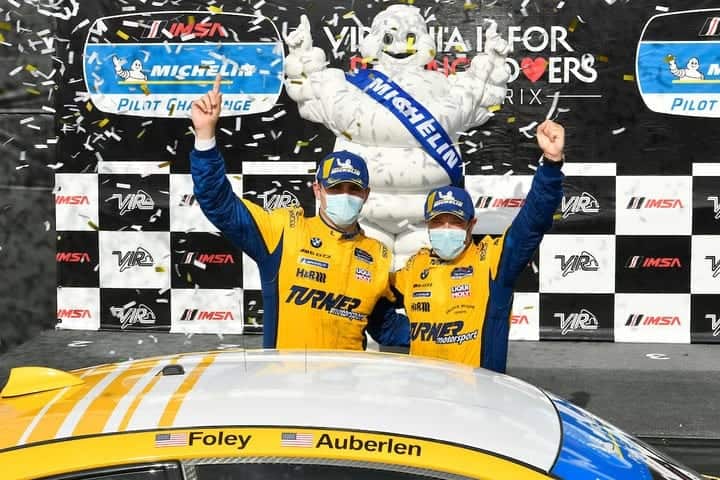 On Saturday, Bill Auberlen became the winningest driver in the history of the top level of IMSA racing with his 61st career victory.  Races in the IMSA Michelin Pilot Challenge don’t count towards that total, but it doesn’t meant that he cannot add to his overall win count.  Auberlen and Robby Foley had a strong race Sunday and held off challenges from behind to win the Virginia Is For Racing Lovers Grand Prix at VIRginia International Raceway.  It is Foley’s first career win in the series, but the 16th of Auberlen’s career.

“[This weekend] has been a dream come true,” Auberlen said after the race.  “The common denominators [here] are great co-drivers, they make your life easy.  Thank you so much, Robby [Foley].  The other is BMW.  Follow that roundel on the hood.  It’s a monster, and today, it was the class of the field.”

Winward Racing’s Russell Ward started from his first career pole, but he lasted about eight seconds in the lead.  Ward drove into Turn 1 too fast on the first lap and went off, allowing Foley to move into the lead.  Ward was able to recover, but dropped all the way back to 11th.

In Ward’s case, the leaders weren’t able to get away since a first-lap crash brought out a full course caution.  Contact between Spencer Brockman and Tim Lewis Jr. sent the Alfa Romeo off the road in the Climbing Esses.  LA Honda World Racing’s Taylor Hagler also spun off and went head-on into the tires.  Lewis and Hagler were ok, but out on the spot.

Behind Foley was Scott Maxwell, the all-time winningest driver in Michelin Pilot Challenge, in his Ford Mustang GT4, giving chase.  Behind them, the man on the move was Nate Stacy in the KohR Motorsports Aston Martin.  Stacy got into second, then ran down Foley before the first round of stops began.  Stacy stayed out and took the lead

Just after Stacy took the lead, Russell Ward, who had moved back up into the top three, slowed to a stop exiting Turn 5.  This brought out the race’s second full course caution and brought the rest of the field in for their first stops.  Auberlen, who had gotten into the No. 95 during their stop, ended up getting back into the lead as a result.

Riley Motorsports’ Dylan Murry was right behind Auberlen with Archangel Motorsports’ Trent Hindman in third.  Once the race restarted, Auberlen was able to open up a gap while Murry and Hindman battled it out for second.  As for Foley, he got a 10-second rest period before getting in the No. 96 in place of Vin Barletta.  After restarting in eighth, Foley quickly moved up the order.

The race ultimately came down to the final round of stops and what teams chose to do during that stop.  Turner Motorsport chose to go with fuel only on both of their BMWs, along with Multimatic Motorsports’ Sebastian Priaulx.  Everyone else went for left side tires in addition to fuel.

Priaulx stayed out 12 extra laps and made his final stop with just 19 minutes remaining.  Priaulx came out of the pits in second and put the pressure right on Auberlen.  The pressure continued until the young Britain went too fast into Turn 1.  That allowed Auberlen to get away while Murry and Foley got past.  From there, Auberlen held on to take the victory.

Auberlen and Foley’s margin of victory was 1.899 seconds over Murry and James Cox.  In addition to winning, Foley was also classified third in the No. 96 BMW with Barletta.  Nothing quite like finishing on the podium twice in one race in the same class.  Maxwell and Priaulx ended up fourth, while Hindman and Alan Brynjolfsson were fifth.

In TCR, Fast MD Racing was completely unable to take advantage of their pace Sunday.  Max Faulkner had electrical problems on the pace laps that forced him to pit.  The problems persisted after the race started.  Ultimately, Faulkner only completed four laps before the No. 23 Audi was retired.

Faulkner’s misfortune directly benefited Bryan Herta Autosport’s Gabby Chaves, who ended up in the class lead.  Teammates Michael Lewis and Harry Gottsacker were right behind.  The entire TCR field was able to make the two-hour distance with only one pit stop.  That stop came during the full course caution for Russell Ward’s issues.

On the stops, Lewis was able to hand off to Mason Filippi and jump past his teammates to take the class lead.  That said, Mark Wilkins in the No. 21 Hyundai was right on Filippi’s tail.

Another yellow flew with just over an hour to go when Ben Waddell flew off the track in Turn 1 and hit the tires.  Waddell was ok, but his Hyundai was done for the day.

The Grand Sport leaders stopping elevated the Bryan Herta Autosport Hyundais up into the top five overall.  The only man who could prevent a Veloster sweep of the podium was JDC-Miller MotorSports’ Stephen Simpson, who was third and running just as fast as Filippi and Wilkins.  However, Parker Chase in the fourth BHA Hyundai ran Simpson down and took third in class away.  Any chance of a decent finish went away when Simpson slowed with five minutes to go with a sick Audi.

Filippi was able to hold off Wilkins to take his and Michael Lewis’ first win of the year.  The margin of victory was just under a second over Wilkins and Gottsacker.  Chase and Brockman ended up third while LA Honda World Racing’s Mat Pombo and Mike LaMarra were the best of the non-Hyundais in fourth.  Chaves and Ryan Norman finished fifth after Norman had two spins exiting Turn 10 in the second half of the race.

IMSA Michelin Pilot Challenge teams will take next weekend off before traveling to Michelin Raceway Road Atlanta for a new event.  This will be a four-hour race on Sep. 4 that will replace the four-hour race that was scheduled to be held at Watkins Glen International.