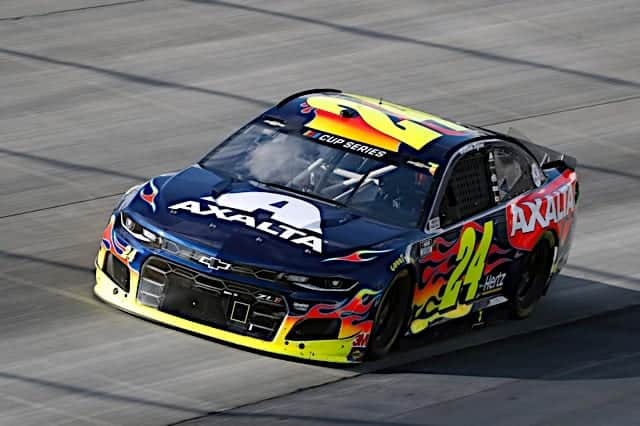 That didn’t go according to plan.

The opening NASCAR Cup Series event of the weekend was a struggle for Byron, with stage finishes of 21st and 25th. His crew chief, Chad Knaus, tried everything, including pitting late during a cycle of green-flag pit stops, hoping the caution would fly and save them. Ultimately, it didn’t, and Byron finished 28th, three laps down. The mediocre run left him outside the top 16 in points, three markers behind Hendrick Motorsports teammate Jimmie Johnson.

The poor performance also left Byron lined up 23rd for Sunday’s race. But this time around, the team had its act together. Byron moved steadily up the running order, and with a caution flying for debris on lap 32, the No. 24 car, Ryan Blaney and Kurt Busch stayed out, giving those three drivers track position. Byron would go on to finish third in the stage, earning eight points. Johnson finished eighth, scoring three points.

The script had been flipped. In the second stage, Byron scored five more points, while Johnson scored two.

As the laps wound down, it looked like Byron and Johnson were going to finish nose-to-tail, prior to a caution flying with 22 laps remaining. In the end, that’s what happened… just not the way everyone expected. Johnson took two tires, giving the No. 48 car the lead while Byron restarted sixth. Over the final 18-lap sprint to the finish, Johnson dropped to third as Byron charged up to fourth.

It was an impressive performance for the No. 24 team after a disastrous Saturday run that caused Byron and Knaus to openly fight on the radio. One day later, they scored their first top-five finish of the season and turned momentum back around.

What a tale of two races for Byron.

“Yesterday, we weren’t even close and today from the very start of the race, I felt like we were in a pretty good position to succeed,” Byron told Frontstretch after his fourth-place result. “It was definitely a totally different thing for us, and I’m very proud of how we did that and rallied.”

By scoring 46 points on Sunday — the most Byron’s earned in a single race all season — the No. 24 team has moved back to 16th and on the playoff cutline heading into the regular season finale. He’s four points ahead of Johnson and only five behind Matt DiBenedetto, who could be necessary for Byron to jump should there be a new winner at Daytona.

The young driver says he wishes the season — and this weekend — would have gone better, but is hoping to get in the postseason at Daytona.

“These doubleheader weekends can really swing the points a lot,” Byron said. “We were on the bad side of that yesterday with the 28th-place finish, then [on the good side] today with a top five. If we could have done a little bit of both and have this result yesterday it would have been cool to see what would have happened.

“Ultimately, that’s not what happened, and we’ve got to go into Daytona and see what we can do.”

At just 22 years old, Byron says he isn’t even going to think about Daytona because of its unpredictability, believing this weekend will be stress-free.

“It’s going to be fine,” he said. “I’m honestly probably going to go do a lot of things unrelated to racing. There’s really nothing we can do. I think we have an idea going into Daytona of what we want our car to do based on the previous race at Talladega [Superspeedway]. Not really thinking about it much, definitely going to think about other things.

“I don’t really know what to expect going into Daytona.”

Byron certainly had pack racing is always a crapshoot. But in three starts at the 2.5-mile oval in the Cup level, Byron has a best outing of second from last summer.

Sure looked like Mr. H told Byron’s team not to pass the 48. Byron on 4 new tires should have passed the 48 on 2. The 88 was right there too. If only Golden Boy was still running.

I get that, but we would hear those team orders over the radio, wouldn’t we?

I doubt there were team orders but I’d bet Chad Knauss cautioned Byron about the big picture. That one position will most likely not make a difference with Daytona coming up this week. However, the downside of not making that pass cleanly would have dire consequences for making the playoffs. So really, there just wasn’t that much to gain and a lot to lose.

What I found interesting is that Byron didn’t have one top 5 all season up until Sunday. I don’t follow him as a driver but I just assumed he had picked up a top 5 somewhere along the way. Once again, why should someone with one top 5 all year even be in the championship conversation. NASCAR really needs to drop the contenders down to 12 (and even that’s too many).