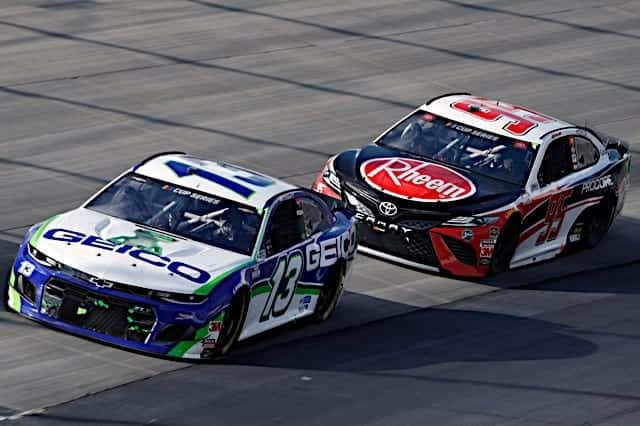 Two races in two days at Dover is one of those things I never thought I’d see. Dover races used to be 500-mile-long, grueling affairs that would leave half the field on the verge of passing out from exhaustion. But the largely abbreviated 311-mile versions that we saw this weekend were, to say the least, much more manageable.

On Saturday, Ty Dillon had the lone result in the top half of the field, as he came in 18th at the conclusion. Dillon has been steady all season, particularly over the summer. He had nine finishes of 23rd or better in a 10-race span, a streak that ended up becoming nine out of 11 with his plummet from the third starting position on Sunday to his finishing spot of 29th.

After the race, Dillon reflected on the physical effects of racing at Dover.

“My GEICO-Germain Racing guys did a good job today, and I’m looking forward to tomorrow’s race. Dover is a very physically demanding track. I’ve been working really hard on my physical shape this season, so I’m excited to put it to the test. We have been really strong in the doubleheaders this season. The Sunday races have been our stronger race each time, which we will try to do again. We came out of the gate strong today and will look to translate that momentum into another solid finish tomorrow.”

In Sunday’s sequel, John Hunter Nemechek just barely squeaked into the final spot in the top 20. Although his season started impressively, things have taken a negative turn of late. Nemechek has crashed out of four of the past nine races after finishing all of the first 16 races this season on the track. Sunday’s finish was only his second top 20 in that nine-race stretch. The second-generation driver certainly needs something to get his momentum going again.

After the race, Nemechek spoke about the result, saying, “We made some good improvements from yesterday in our No. 38 ACME Markets Ford Mustang. We started off pretty free today, but Seth and the crew made some good adjustments on pit stops throughout the race. I have to say a big thanks to my crew for sticking with me all day. We were able to improve on yesterday’s finish and that’s something to be proud about. I’m glad we were able to have a better run today for our partners at ACME. We’ll take our notes back with us, regroup and get ready for Daytona next week.”

Qualified participants in this category are essentially nonexistent due to the fact that in each race, only one underdog managed to finish in the top 20. Few top drivers had trouble, which is another one of those things you never used to see at the “Monster Mile.” Perhaps Miles has mellowed with age, but he just doesn’t gobble up sheet metal the way he used to.

The contenders in the Xfinity Series had their own double dose of Dover to contend with, as they too raced on Saturday and Sunday. Saturday afternoon, Ryan Sieg led the way for the other guys with his No. 39 Chevrolet in 12th place. Jeremy Clements was next in 13th, Brandon Brown 14th, and Brett Moffitt took the final spot in the top 15.

The NASCAR Gander Outdoors Truck Series teams ran their race on Friday afternoon without much more success in terms of underfunded teams. Derek Kraus once again was best in class with his 10th-place result. The lone other competitor to accompany him in the top 15 at the end was Carson Hocevar in 12th position.

NASCAR heads back to Daytona International Speedway (the round version) this weekend to finish off the regular season. Let’s face it: this is a superspeedway race, so we’ll probably see the finishing off of a bunch of racecars as well. This will open the door for the underdog teams just as it always does. Anyone can get a good finish and possibly even a win. Corey Lajoie, Michael McDowell and Dillon are all excellent top-10 prospects for Saturday night’s race.

As for the Xfinity Series race on Friday night, expect a slew of underdogs to run well. I’d look at Brown and Moffitt as potential winners. Additionally, Martins has been on a solid streak of late and will be out to make a point after failing to qualify for the season opener in February.

The trucks will serve as the weekend finale, racing on Sunday at Worldwide Technology Raceway (Gateway). It’s a bit too easy to pick Kraus as the best option here, but I’m gonna go a step further and deem him a possible race winner. After all, he did win a K&N West Series race at the track in 2018.

I love Dover but this weekend was rough, looking forward to get OUT of here!
Still one of my favorites, next time will be better!????

Dover double ✅! Onto @DISupdates. Can’t thank my @StarcomRacing team and Eagle Rock enough for allowing me to have some fun! #z00m #GreenMachine pic.twitter.com/QJfBxnXG2h

Tough day for the @thriv5 @RickWareRacing #27. A RF suspension failure put us in the garage for the day. The changes made from yesterday were positive and I was very happy with the car. ?‍♂️ pic.twitter.com/HjgfYbeDGE