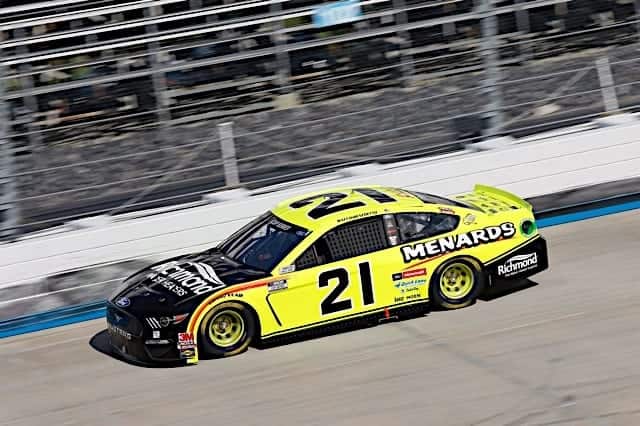 The completion of this weekend’s doubleheader races at Dover International Speedway was an important milestone for NASCAR.  The Cup Series is now caught up with its original 2020 schedule.  All of the races with revised dates due to COVID-19 are finished, leaving one race remaining in the regular season before the ten-race NASCAR playoff begins.

This year, that race is at Daytona International Speedway, offering a major opportunity for drivers outside the playoff grid to score a last-gasp win.  But what NASCAR and its fans might not have figured out is that this year’s race to the playoffs also includes a compelling points battle for the last few spots on the grid.

Last year saw Daniel Suarez and Ryan Newman enter the regular season finale at Indianapolis Motor Speedway tied for the final postseason slot.  Clint Bowyer was eight points ahead of them with Jimmie Johnson 18 points behind.  A top-five run by Bowyer and an accident by Johnson brought the focus to Newman and Suarez, with Newman squeaking into the final playoff spot by four points.

That drama was a rarity for the Cup Series. Usually, point battles for playoff spots that lasted through the end of the regular season have been hard to come by under the current format.  In 2018 and 2017, only a new winner would have changed the playoff field in the last regular season races.  Neither of those events featured new winners, so the postseason grid held steady.  And from 2014 through 2016, the driver on the bubble usually held a significant points advantage on the drivers below the cutline. That prevented anyone from racing their way in at the last minute.

This year will be different.  After Sunday’s race (Aug. 23), three drivers battling for the last two playoff spots are separated by just a handful of points.  Matt DiBenedetto finds himself 15th in the playoff grid, nine points above the cutline.  William Byron holds the bubble spot at four points above the cutoff.  The first driver out is Johnson, the only driver left outside the playoff field who stands a realistic chance at racing his way in without a win.  Plenty of other drivers will be aiming solely for victory lane.  Yet the true battle will be among Johnson, DiBenedetto and Byron.

Up until last year, Johnson had never missed the playoffs, and he will have to try to avoid that fate for two years in a row.  2020 is also Johnson’s final season competing full time in NASCAR, giving him one last chance to win an unprecedented eighth Cup Series title.  A run of three straight top-10 finishes have put the playoffs within his reach.

If not for some difficult circumstances, Johnson could be reasonably higher in the point standings.  One of his best runs this year, a second-place finish in the Coca-Cola 600, ultimately ended in a disqualification and loss of points when the No. 48 failed post-race inspection.  Johnson also missed last month’s Brickyard 400 after testing positive for COVID-19.

Having competed in NASCAR for about two decades, Johnson would be the first to tell you that one or two races are not responsible for the final results of a season.  But it does stand to reason that the disqualification at Charlotte Motor Speedway and not competing at Indianapolis Motor Speedway put Johnson closer to the danger zone than he would have been otherwise.  A strong performance at Daytona, one that gets him to the playoffs, would be a bright spot in a difficult year.

DiBenedetto’s playoff fortunes are another interesting case.  At the beginning of the season, the California native was probably not on a lot of people’s lists to make the postseason.  DiBenedetto has never won a race or made the playoffs, signed to a one-year audition of sorts with Wood Brothers Racing. It’s a single-car team which did not make an appearance in the playoffs the past two years with Paul Menard at the wheel of the No. 21.

However, both driver and team have seized on their new opportunity.  DiBenedetto has spent almost the whole season above the playoff cutline and his first season with the Wood Brothers has looked like the start of what could be a great relationship.

That said, DiBenedetto’s seat has gotten hotter in the last few weeks.  He and the No. 21 team have not shown any sign this year they are moving closer to a point where they can regularly compete for wins.  Austin Cindric, on the other hand, has been tearing up the NASCAR Xfinity Series over the last month.  That’s significant because the Wood Brothers have a technical alliance with Team Penske and have played the role of development team for Penske in the past.  With all of Penske’s Cup drivers re-signed for next year and Cindric’s future uncertain, where does that leave DiBenedetto?  He seems to still have the support of Menard (and thus sponsor Menards), but he could still be the odd man out if Penske and Ford want Cindric in the Cup Series.  Securing a playoff spot would give DiBenedetto some good leverage for planning his future.

As for Byron, his biggest obstacle next weekend, and for that matter the rest of this year, is the weight of expectations.  His meteoric rise through NASCAR’s ranks, followed by a strong finish to the 2019 season, suggested that he was on the cusp of breaking out.  Piloting Hendrick Motorsports’ famed No. 24 with Chad Knaus as crew chief, Byron seemingly has everything he needs to start competing for victories.  Yet Byron and Knaus have not gelled the way some people would have expected.  Instead of steady improvement, the No. 24 team hasn’t been any better in 2020 than it was last year.  Qualifying for the playoffs and a good postseason performance would show that Byron is, indeed, making progress.  If he and the No. 24 team are capable of any more performances like they had at Dover on Sunday, now is the time to step up.

All three of the drivers near the bubble have a lot riding on the final regular season race.  Playoff berths would be helpful for DiBenedetto and Byron as they continue to build their NASCAR careers.  For Johnson, making the postseason is all about ending a stellar career on a high note and reminding everyone why he is one of the best.  Throw in a field full of drivers going for broke on the high banks of Daytona and next weekend’s race sets up to be quite a show.  If NASCAR was searching for more drama to end the regular season, the sanctioning body’s wishes have been granted.