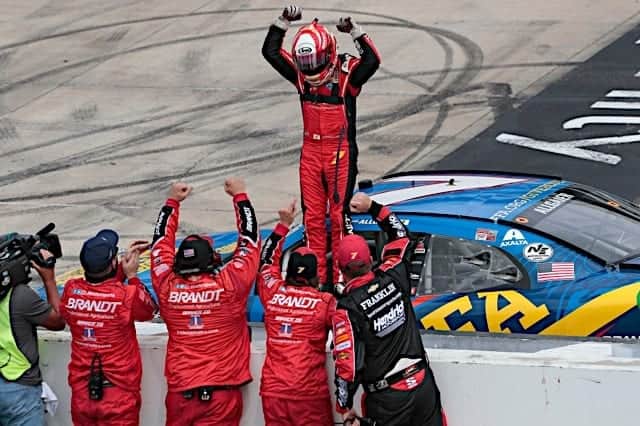 For one driver, Saturday (Aug. 22) was sweet relief in the NASCAR Xfinity Series. For the other, Sunday (Aug. 23) was a stepping stone back up to the top. Those were the circumstances surrounding Justin Allgaier and Chase Briscoe, the respective winners of the twin runnings of the Drydene 200 at Dover International Speedway.

For a season that has given Allgaier plenty of turmoil, he managed to convert it all into a statement-making performance on Saturday afternoon. His No. 7 Chevrolet Camaro stayed out front for 120 laps, denying Austin Cindric, who finished second, another win and taking sponsor FFA to victory lane.

Meanwhile, on Sunday, Briscoe had to wait a little while before getting to taste clean air up front. Brett Moffitt, Chastain and Allgaier had their respective turns in the lead until Briscoe surged past Allgaier on a lap 71 restart. The race went green the rest of the way and there was no stopping Briscoe on his way to victory.

The NXS title contender captured his eighth career win and his sixth of the 2020 season. Chastain, Cindric, Brandon Jones and Daniel Hemric rounded out the top-five performers.

Saturday: After getting spun out by AJ Allmendinger with a handful of laps to go at the Daytona road course last week, Dover was the best form of medicine that Justin Allgaier and the No. 7 JR Motorsports team could have ever received.

For Allgaier, Saturday’s win comes much sooner than his lone 2019 triumph at Phoenix Raceway, which, of course, is where the 2020 season finale will be held. Right now is the time for this JRM veteran to start flexing some muscle, scoring as many stage wins, playoff points, race wins, etc. as possible. It’s all about peaking at the right time when it comes to the playoffs, right? Allgaier still has a shot to set himself up well for getting into the Championship 4 once again.

Sunday: Chastain may have not been the victor on Sunday, but the runner-up finish he earned made him the best average finishing driver over the two races at Dover. He’s already comfortable with the racing product at the Monster Mile, as he made his Cup Series debut there in 2017, scoring a 20th-place finish.

This weekend gives Chastain and Kaulig Racing plenty of confidence heading into Daytona International Speedway, a track where they look to repeat their 2019 summer success.

Saturday: Briscoe’s winning weekend didn’t get off to a great start. On lap 78 in Saturday’s race, he spun out on his own exiting turn 2, nosing the No. 98 Ford Mustang into the wall. Thankfully, the damage was repairable, and Briscoe clawed his way back to a 10th-place finish. But the incident was still one dent in his weekend that he was hoping to avoid.

Sunday: Jeremy Clements’ performance on Sunday wasn’t as satisfactory as he hoped it would be. He finished 19th, three laps down while his closest competitor in points, Brandon Brown, finished 16th. Brown expanded his points gap over Clements to 31 markers with just five races remaining until the playoffs. There is still time for Clements to gain ground on Brown before the regular season finale at Bristol Motor Speedway. But he’s left himself no margin for error with Daytona on the horizon.

The race weekend at Dover International Speedway was rather tame, especially according to Miles the Monster’s standards. The biggest incident that occurred between the two races involved Vinnie Miller, who slid up into Jeffrey Earnhardt on Sunday coming onto the backstretch. Miller’s No. 78 Toyota Supra impacted the wall, then carried on down the straightaway before hitting the wall again in turn 3. He would finish last. It was another forgettable day to what has been a somewhat forgettable season for Miller and the BJ McLeod Motorsports team.

Saturday: Dover is not an easy track for underdogs and this race was no exception. Every driver inside the top 10 had a playoff spot virtually locked up with the exception of part-time racer Jeb Burton (seventh for JR Motorsports). Joe Graf Jr., who wound up 18th, did post just his second top-20 finish in the past 10 races.

Sunday: It was a day of firsts for Moffitt. In his 20th career Xfinity Series start, he took advantage of a front row starting position and led the first 25 laps of his Xfinity career. Moffitt managed to keep the nose of his No. 02 Chevrolet Camaro clean all day before capping it all off with a 10th-place performance. It was a result well earned for both Moffitt and Our Motorsports.

“These last 18 to 24 months have been crazy. Proud of these guys and the no-give up attitude they have.” Justin Allgaier

“I had a great battle with Justin, I knew he wanted it bad and that it wasn’t gonna be an easy pass… Props to him and those guys. We’ll try to do better tomorrow.” Austin Cindric

“We haven’t won in a month in a half but it feels like it’s been five years. It’s cool that we’re kind of back to where I feel like we were at the beginning of the year.” Chase Briscoe

“I’m just happy that we have the speed. And when we win, we’re gonna win a lot.” Ross Chastain

For Justin Allgaier and Chase Briscoe, they have nothing to worry about as far as the playoffs are concerned. But as the NASCAR Xfinity Series goes to Daytona International Speedway, drivers toward the back of the top 12 should be a little nervous. We have seen many surprise winners at superspeedway tracks and the possibility of an upset there always exists. A Cinderella story may bump Brown out of the playoffs and leave 11th-place Ryan Sieg sitting on the cutline.

For the drivers already locked in, Sunday is their last “free ride” before the playoffs begin. They can afford to take extra risks and make bolder moves… to a point. For at Daytona, one mistake by anyone, on any lap, and the Big One could wipe out half the field.

The NASCAR Xfinity Series will head back to Daytona International Speedway for the second time in three weeks, this time competing on the 2.5-mile oval. The Wawa 250 Powered by Coca-Cola will take place on Friday, Aug. 28 at 7:30 p.m. ET. NBC Sports Network will be televising the event.