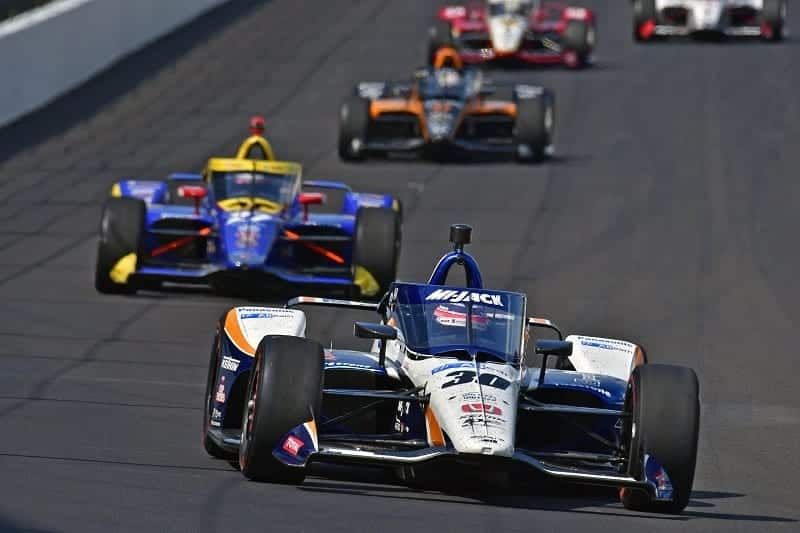 The 2020 IndyCar championship has taken definite shape now that the Indianapolis 500 has taken place and awarded double points. Scott Dixon is still the favorite to take home the Astor Cup at this pivotal point in the season, but the extra points on offer Sunday (Aug. 23) mean that the rest of the standings have shifted.

Here are the top 2020 IndyCar championship contenders following the Indy 500 as the second part of the season gets underway.

With 335 points after the Indianapolis 500, Dixon’s lead over his competition has been extended to 84 points. With the year he’s had, it’s tough to see the No. 9 Chip Ganassi Racing driver slipping down the rankings at this point with potentially only five more races on the schedule. He’s finished on the podium at Gateway and St. Petersburg before, and he’s already won at the Indianapolis Motor Speedway road course this year.

Dixon’s second-place finish in the Indy 500 proved the Iceman’s level-headed skill across the board. He’s not the mathematical championship winner yet—but he very well could be if he has two similarly impressive results at Gateway.

So close for @scottdixon9.

What a performance by the entire No. 9 @PNCBank team today. P2 will just have to do today…#BankOnThe9 | #Indy500 pic.twitter.com/PqaF6ODBeq

In Team Penske’s rough season, Josef Newgarden has proved to be the team’s shining light with his 251 overall championship points. Qualifying in 13th and finishing fifth in the Indianapolis 500, Newgarden made the most out of a chaotic race and racked up the points he needed to keep the Astor Cup in sight. He’s Penske’s best shot at the 2020 title, but he’ll need to find more consistency if he wants to mount a significant challenge.

Newgarden already has a win at Gateway and a victory at St. Petersburg on his resume. If he can draw on the skills it took to win those events and positions himself to take advantage of any of Dixon’s mistakes, he could make the No. 9 Chip Ganassi Racing driver fight tooth and nail to the very end of the 2020 IndyCar season.

Things are still pretty dicey farther down the 2020 IndyCar championship line, with Arrow McLaren SP driver Patricio O’Ward securing third place in the championship at 218 points—but with only a four-point buffer. O’Ward took home Rookie of the Year accolades at the Indianapolis 500 as a result of his sixth place finish, and his other results, while not super consistent, have at least been promising.

The Mexican driver hasn’t competed at any of the tracks remaining on the 2020 IndyCar schedule except for the IMS road course, which is going to make maintaining his place in the championship difficult with experienced drivers nipping at his heels.

If O’Ward has proved one thing this season, though, it’s that he can make the most of a challenge. With a solid Indy 500 result under his belt, he’ll have plenty of confidence attacking the last races of the year.

Race day?? we know what to do. Lets go get it boys @ArrowMcLarenSP #Indy500. pic.twitter.com/JogPUf33k2

Graham Rahal‘s impressive third-place finish at the Indianapolis 500 was enough to get him to a total of 214 championship points and rocket him up the championship scoreboard. He’s still significantly behind Dixon but he’s within fighting distance for the title.

Unfortunately, Rahal has historically had a tough time at Gateway, and has achieved only one second place in St. Petersburg. If he’s able to secure more podiums and the points that come with him in these next races he will have a real shot at the Astor Cup but he’ll have to break his personal trends.

Simon Pagenaud has 212 points after a disappointing 22nd place finish in the Indy 500, but his win at Iowa and a strong finish in the Texas season opener have the former champion hanging on in the overall standings. With only a handful of chances to earn points left on the calendar, it’s going to be crucial that Pagenaud makes the absolute most out of these races to move up from his current fifth place.

Pagenaud has podiums at Gateway in past seasons and finished third at this year’s GMR Grand Prix at the IMS road course. If he can start a streak of solid finishes, the Frenchman will keep both Rahal and O’Ward on their toes at the very least. And if Iowa taught us anything it’s that Simon Pagenaud is never really out of any fight.

Takuma Sato‘s numbers show how much double points at the Indianapolis 500 impact a driver’s chances for the Astor Cup. Coming into the Indy 500 , Sato had a mere 99 points and was back in 17th place overall. Now he has 207 points and sits in sixth—a more than 100 point and 10-place gain.

At this late point in the season he likely won’t mount a significant championship run, but it’s truly impressive to see how he’s in the mix to finish high up in the overall rankings considering how his 2020 IndyCar season began. Sato’s current record contains a 21st place finish, a failure to start, and a handful of eighth to 10th places.

That said, he scored a win at Gateway in 2019. A solid performance at this weekend’s upcoming doubleheader there  could be exactly what he needs to solidify his position in the top 10.