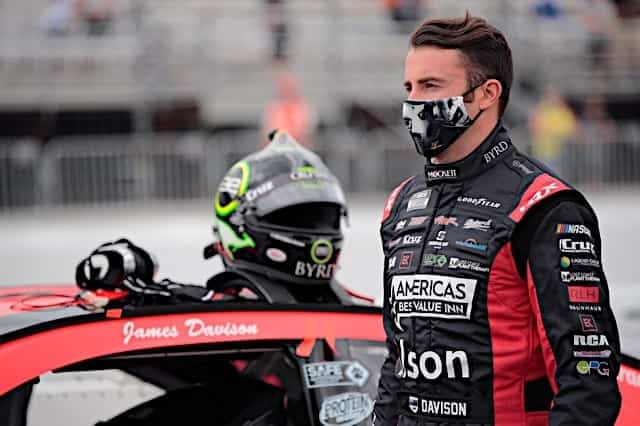 James Davison is a racer’s racer; someone who will drive anything under the sun with four wheels. In an unpredictable 2020 season, he’s dipped his toes into the NASCAR Cup Series, as well as been the driver in Rick Ware Racing’s first foray into the NTT IndyCar Series.

Originally, Davison was scheduled to make his Cup debut at Talladega Superspeedway in late June. But after second thoughts, NASCAR delayed his eligibility — as he’d never competed on an oval in the NASCAR Xfinity Series — until the following week at Pocono Raceway, where he would drive the doubleheader weekend for Spire Motorsports. In his debut, he brought the No. 77 Chevrolet home 34th and followed that up with a 30th-place finish the next day.

Davison didn’t get the nod to run again until the beginning of August, driving the No. 53 Rick Ware Racing car at New Hampshire Motor Speedway. That was a start of four consecutive races in Cup for the Australian driver, with two coming at Michigan International Speedway and one in the inaugural Cup race on the Daytona International Speedway road course. All the while, he was preparing for the 104th running of the Indianapolis 500.

With six Cup races in the books, Davison is content with his performance.

“I’ve been happy with how I’ve done,” Davison told Frontstretch. “There’s been no practice or qualifying, and I’ve been driving on [tracks] that I had never been to before. Although I had driven in the Xfinity Series, all of those were on road courses. These are on an oval, and I was thrown into the deep end.

“Within the small teams at the back, those are the only real guys you can benchmark yourself against who have got similar equipment. I’ve been happy to run competitively toward the front of the bottom pack.”

JJ Yeley, an RWR driver, recalls meeting Davison last year at Indianapolis Motor Speedway, where he teased the idea of running some races in NASCAR. Yeley added Davison was interested in learning about Silver Crown cars as well as potentially racing a midget race on dirt.

That conversation sparked interest in RWR, and within a year, Davison was running at the Cup level.

“It came full circle and got him in the seat to run a couple races,” Yeley said. “He’s done a pretty good job with it. It’s a huge learning curve from other things he’s driven. [I’m] just trying to give him some pointers for the Cup Series.”

Yeley said with no practice nor qualifying, Davison has done more than a respectable job running in Cup, despite having never seen most of the racetracks he’s competed at.

An average finish of 33.2 is nothing to brag about. But when running for an underfunded team at the Cup level with absolutely zero prior experience in the top series of stock car racing, Davison’s first six starts could have gone a lot worse.

Surprisingly, Davison believes it hasn’t been all that challenging with no previous laps at the tracks he’s competing at in Cup.

“I have the opportunity to do it, and these are the circumstances that it’s under, and really, beggers can’t be choosers,” Davison said. “I wouldn’t be able to get a start any other way, especially in 2020.

“I’ve got nothing to lose. Believe me, I don’t like running 30th every week. But that’s the situation within NASCAR, and you’ve just got to do your best with it.”

Ultimately, Davison’s short-term goal is to compete in the Daytona 500, a race he’s always wanted to participate in. By gaining experience this season, it sets up for a possible run as early as next season, potentially with RWR.

But that’s not his only goal in NASCAR, as he would, in a perfect world, run the majority of the Cup schedule next season. Furthermore, Davison is looking at 2022 as the possible year to bridge the competitive gap, with NASCAR introducing the Next-Gen car.

Davison added, “I would like to think I could be around for a couple of years and move into some better equipment or wait until the Next-Gen car comes and maybe I can put into play what I’ve learned and maybe move up in NASCAR.

“I’m in a difficult situation to shine, but I don’t have any other luxury. I’m just really fortunate to have the opportunity to be racing in NASCAR period.”

Rick Ware, owner of RWR, told Frontstretch he’s hoping to have Davison compete in “at least half” of the 2021 schedule, if not more. He’s set up to run an approximate total of 10 races this season in Cup.

If so, that would help Davison achieve his primary goal of building up a skillset so that when the new car enters the sport, he can potentially be on a more level playing field with the bigger teams.

On Aug. 6, four days after competing at New Hampshire, RWR announced it was teaming up with Dale Coyne Racing to field the No. 51 entry for the Indy 500 with Davison as the driver.

For Ware, he’s centered his company’s core in NASCAR, but also has a sports car team. It was his dream, though, to field a car in the Indy 500, as Rick Mears was his idol growing up.

Initially, Ware, 57, had conversations with other team owners and INDYCAR officials back in January and February, hoping to field a team this season for The Greatest Spectacle in Racing. The cost to run a car was high at first, but when the COVID-19 pandemic hit, it affected a lot of major teams, businesses and sponsors, subsequently leading to opportunities that were more feasible for RWR.

As the race grew closer, Ware went to work, saying he put a deal together with Dale Coyne Racing about one month prior to race day.

“You have to create a storyline, and you have to create excitement for your sponsors,” Ware said of becoming an IndyCar team owner for the 500. “We’re a smaller team, we’re running the best that we’ve run in years [in NASCAR]; 25th to 30th, pretty regularly on the lead lap, which doesn’t always sound great but is tough to do at the top level.

“We have to generate storylines, and we’ve done a lot of things in the past that are kind of unique, so the idea of taking my sponsors that I have existing and saying, ‘Hey, what do you think about spending a little more money? But here’s what we’ve got to market, the Indy 500.’

“It’s about being able to offer something that someone else doesn’t have to offer.”

Typically, Ware wouldn’t be able to guarantee his sponsors that they’d qualify into the Indy 500, but with just 33 cars on the entry list this season, there was no question they’d get their moneys worth. The team called on Davison, giving him the unique story of being the only driver running in both NASCAR and IndyCar at the same time.

If the sponsors — Jacob Companies and Tilson HR — weren’t there, 2020 wouldn’t have been the year for Ware to make his team owner debut in IndyCar.

“You have to leverage all of your relationships and people that you know to be able to do this economically and be smart about it. Because obviously, you can’t just do it like a drug seller and go crazy,” he added. “You have to do business, and it is business.”

As for 2021 and beyond, Ware confirms he’s in ongoing negotiations of seeing how much money it would cost to run a full-time team. In NASCAR, the team is currently fielding four full-time entries, along with a sports car team that won the Asian Le Mans championship earlier this season. The team is also figuring out what it wants to do with IMSA next year.

“I do believe to be in a situation to offer three of the four biggest motorsports events in the world is a pretty unique opportunity, so we’re looking at being able to do that way before the offseason; lining up sponsorships,” Ware added. “… I want to have longevity in the sport. We’re getting close to our 1,000th start in the premier series of NASCAR. And I think having some diversity when corporations start looking at where they can start spending money and where they’re going to spend it at, I think we check a lot of those boxes off as far as hospitality and the consumer side of those events.”

For 2021, Ware’s set on having at least one driver compete in three different series for him.

“My goal right now is we’re going to have at least one-to-two drivers to drive the Daytona 500, the Indy 500 and [Rolex 24 at Daytona] next year, which will be unique from a sponsorship standpoint, a driver standpoint. It would be good for NASCAR and IndyCar.”

In the team’s first outing at Indy, Davison had a brake master cylinder malfunction, causing the brakes to stick and resulting in a big fire in the right front tire. Ultimately, the team finished last in its debut.

All Rick Ware Racing does is steal since there is nothing legitimate about what they
call racing which would be laps down & running poorly every time.